Devil Prince Gamayun (a.k.a. Lord of the Empty)

The Devil Princes vie for domination in Throne in the absence of Abayin's authoritative power. But while Marqôd and Be'alim scramble for influence in the central provinces, there is a lord among the active five who doesn't concern itself with petty squabbles. Its name is Gamayun, and it titles itself Lord of the Empty.

It claims for itself the outer rings of Throne, which number 887 and stretch on for infinity. Each ring is less populous than the last, but the structures are more magnificent. In the farther rings, the floor is made of not stone, as in Throne, but of corpses. The remnants of the War in Heaven.

In these outer rings, Gamayun seeds its will and built its palace.

Gamayun takes the appearance of a single, large, white sphere with a single red eye with a black slit of a pupil darkly glittering.

Perhaps of all the Devil Princes Gamayun is the most like Gendûet. Its will to rule has superseded its desire to serve a greater master. And this has translated into its dominion and its servants. Black spheres with single eyes, similar to their master in appearance but much smaller and less terrible, are expelled from Gamayun and they serve it only. Its will is theirs, and their self is Gamayun.

But unlike Gendûet it does not will to dominate the lesser races or even the other devils. For Gamayun there is nothing less horrendous than that idea of otherness. Nothing but destruction is agreeable to it. Nothing but Gamayun may remain at the end of things.

The Mad Goal of Gamayun

For this Devil Lord there is nothing more abhorred than music and silence. Conversation is a means to an end. An other may be bent towards its own destruction. A contract can be proposed and deals may be made to further its goals. But for a devil spirit, music is but the meaningless acceleration of the celestial experience - quite opaque to Gamayun - while silence lets in silly qualms, despairing scruples, and impossible desires. Worst is when music and silence work in tandem - detestable! No, for Gamayun there must be Noise. Noise, the grand dynamism, the representative of the virile and masculine. With Noise Gamayun will exclaim, and with it he will dominate the Noise of the other Devil Lords, it will shout down the music and silence of the Heavens, and in the end, there will be nothing but Gamayun and the whole universe will be nothing but a noise.

Gamayun is everywhere in the Outer Rings. It will have known if you've visited them. Perhaps it will send a request to you. A request to come to his Palace of the Embrace. A tea party invitation. At least, if you're interesting, Gamayun will invite you. The cultists who have tried desperately to find the attention of Gamayun have sometimes visited his Palace. Funnily enough, they say - well, what we can make of what they say amidst the gibbering - that the Palace is silent as the grave. Nothing but a ringing in your ears. Ringing like a chime that never dims.

In the times of the Wars of Hate it is said that Gamayun was a collector of knowledge. He gathered the resources of the world and collected them into a vast library. It is an unending place of knowledge. Utterly quiet like everywhere else in his domain. The cultists that worship him primarily do so for this library's sake: the Archivus Infinitum -- a place of madness; a place of knowledge. Gamayun the Contradictory, they say. Truly a title worthy of its bearer. And fitting for one so filled with hate of all things. 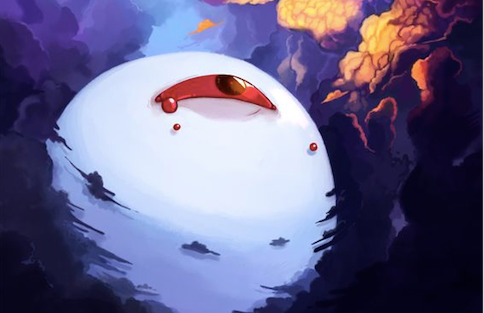