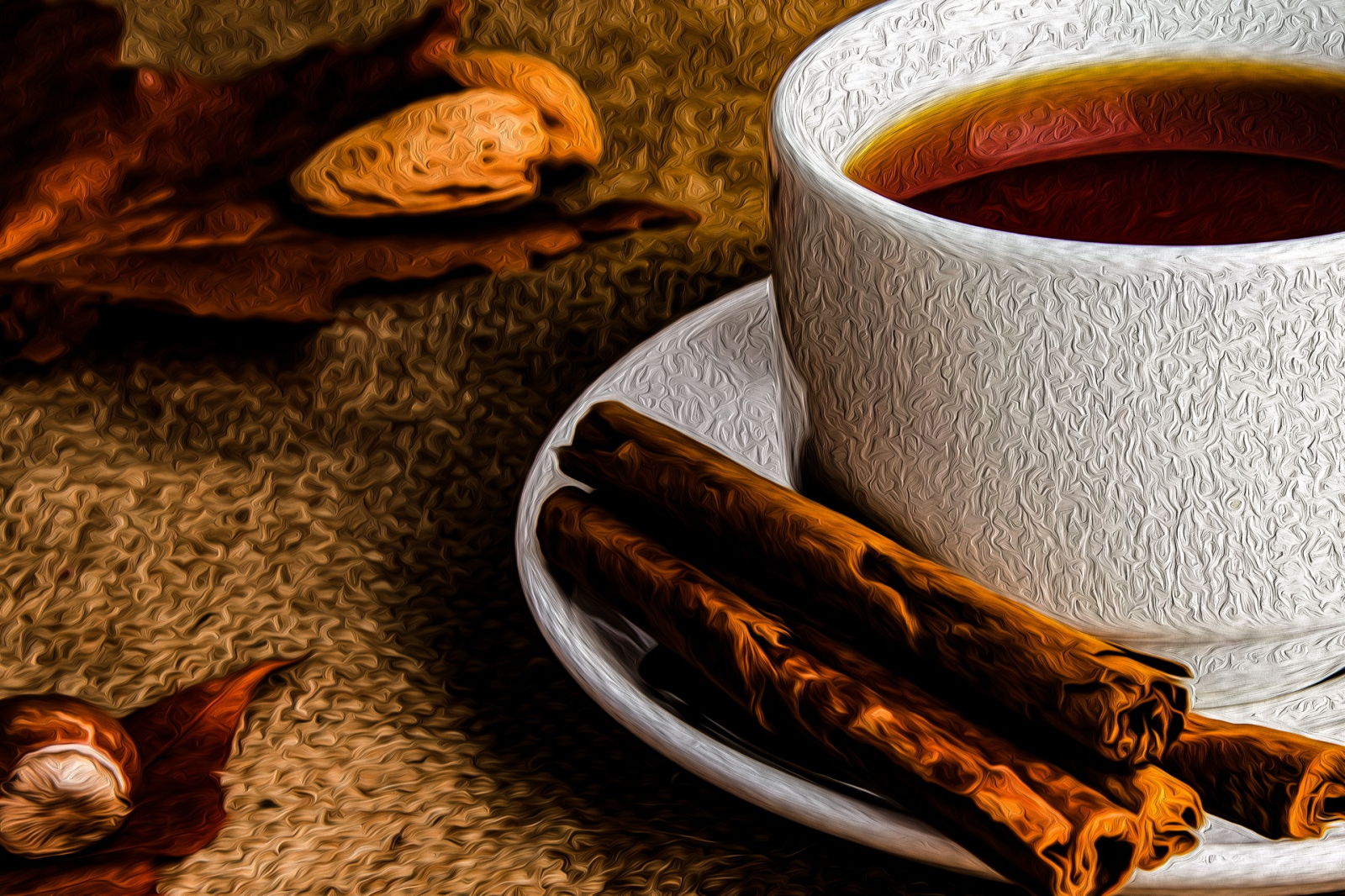 Graf is a strong orcish stimulating drink, always served at the morning meal and often served throughout the day. Males drink it strong, black and bitter; females add honey and heavy cream. In the evening, strong alcohol is often added (usually rum, brandy, or sake; occasionally a fermented milk alcohol called tyklak.) Essentially, it is chai spice in coffee!   Traditionally, the coffee is brewed with the rest of the ingredients in a cast iron, copper, or ceramic cauldron over a fire or brazier. The coffee is added as whole beans, which do not leave grounds that would then need to be strained out. The liquid is brought to a boil and brewed quite strong. It's not uncommon for a pot of graf to have been started the night before and added to periodically throughout the day, like a stone soup. In the cold winter months, butter may be added directly to the pot as well. In the summer months, coconut milk might be added instead, especially as a supplement to thin rations.   Sometimes the residue that is left at the bottom of the pot is scraped up at the end of the day, tied off in a muslin bag, and used to start the next day's graf. It is said that the five original Great Clans still use grists that date back to the Founding. Each clan has its own interpretation of graf recipes, with varying amounts of the relevant masala spices.   This grist is often packed into presses and dried in bricks, which are easier to transport and store. These graf bricks are included in standard orcish Navy rations. When confronted with a situation in which they know they will not be able to stop for proper graf, such as travelling through Wormholes & Portals or being in the field or doing a hard day's labour, they frequently scrape off a fragment of a brick and swirl it around in their mouths, like a "chaw."   In large gatherings or at home, Balorian orcs use large cauldrons to brew their graf, and serve it still heated over braziers. Those partaking of it use round ceramic coups without handles to dip into the cauldron and take what they want. Graf cups in common usage are usually plain and unadorned, made of ceramic, clay, or even wood. However, ceremonial graf services, which are kept for special occasions such as multi-clan gatherings, weddings, funerals and so forth, are brightly and elaborately painted with clans runes and stylized totemic images. On ships or when in the field, smaller or even individual graf services may be used.   Since this would be quite cumbersome in our present world and culture, this adapted recipe assumes that one is using a percolator or typical automatic drip coffee maker with a 12 cup capacity. Other cultures on our world, such as the Mongolians, would perhaps find it easier to adapt.

Grind up the cardamom pods, cloves and peppercorns with a mortar and pestle. Add the cinnamon and ginger and mix thoroughly.   Add 1 tbsp of mixture to enough coffee grounds to brew a strong pot of black coffee, and percolate. Remove grounds. Stir in butter or coconut milk, if desired, while coffee is still hot.   Add honey and cream if desired (or your favourite spirit) and drink!

For an Automatic Drip Coffee Maker--

Grind up the cardamom pods, cloves and peppercorns with a mortar and pestle. Add the cinnamon and ginger and mix thoroughly.   Add 1 tbsp of mixture to the basket, along with enough coffee grounds to make a strong pot of black coffee. Brew.   Stir in butter or coconut milk, if desired, while coffee is still hot.   Add honey and cream if desired (or your favourite spirit) and drink!

For a French Press--

Include the graf spice mixture, prepared as above, in the coffee grounds. Proportions vary and depend on the size of the press. In general, estimate 1 tsp of the mixture per cup of coffee, or 1 tbsp per pot. Add butter, milk, coconut milk, honey, etc. when you would normally add your milk.   *Note: Most of Elatha, the orcish homeworld, is damp and tropical, so wheat, rye and oats do not grow well there. Alcohols made from such must be imported, and are therefore expensive and not often used culturally except for on special occasions.*

Special thanks to C.B. Ash ( Kummer Wolfe) whose suggestions helped expand this article!

They were serving rice, a fierce green coconut curry, and some sort of bitter and spicy liquid concoction that Shaundar was unfamiliar with. It was delicious, and it warmed the belly nicely. It tasted as though someone had dumped pumpkin pie spice and a pepper mill into a cup of coffee.   They helped themselves to a couple of bowls and then commandeered a few carafes. Again, probably because it looked as though they knew what they were doing, no one bothered them. It disturbed Shaundar just a little to realize how easy this was. At least, until that damned Talgor from the Doomspears came up to them and asked plaintively, “You’re not taking all the graf, are you?”
— To Know Your Enemy by Diane Morrison

Would that be "French Press" or "Elven Press"? heh   Really though, this is a great article! I love it.   So, if its an orcish breakfast coffee ... how common is it for graf to be a primary ingredient in orcish hardtack for emergency rations?   Also, do any orcs just use the grounds as a 'chaw' during a day they know they'll be up to seriously hard labor?

Orcs do nothing without graf. It's everywhere. You're damn right it's part of emergency rations! That gives me an idea to expand upon and I think I will. I can see how that would work.   And yes, I can absolutely see orcs using the grist as a chaw for just such occasions, and I will add that too, because yes, that would be absolutely consistent. I think I'll even put it in the stories. I have just the place.   It's fun that you grok my orcs so well! Thank you for this!

You're very welcome! and I just love your orcs! They're great!

— The wolf of Tales of Justice, Creator of Legends of Elohey, Star Wars: Shards, Fiven Chronicles and more!
Powered by World Anvil