At 47, Gerdan has the physique of a man 20 years younger.

Gerdan has no exceptional body features, except he is in excellent physical condition.

Gerdan keeps a sharp mustache and goatee, which does a great deal to hide his large nose.

Gerdan has strong laugh lines around his eyes, and smiles often.

Gerdan affects a limp that he doesn’t really have, and compensates with a cane.

Gerdan is an accomplished Psion (Telepath) and an adept Slayer. He has all the abilities of a 13th level telepath and a 7th level slayer.

Gerdan always carries a 24-inch cane with a spring loaded 18-inch double-edged blade that erupts from pommel and turns the cane into a goblin iklwa. The very same goblin iklwa that would pass down to Durga "Ghost" Bloodfist and form the basis for the fighting style adopted by the The Shadow Brothers.

Gerdan was born under a bad sign. Fully 10 days premature, the tiny infant, and a litter of four others were not expected to survive, and indeed, his siblings did not. However, Gerdan was born with a will unparalleled by any child they had ever seen. Against all odds, even though they had quit feeding him, the baby survived. After two weeks lying in a dumpster, Gerdan was fished out by his Kax’Vee (his future mother, not his birth mother), and given his name, which means “iron spirit”. Gerdan is also the male equivalent of Gerda, and that was his mother’s name, Gerda Meteorswarm, wife of Don Lugar Meteorswarm, leader of the Meteors Cartel. Don Lugar couldn’t have cared less for the child, but his ip’ara-dare wife became very attached to the boy and ensured that he got into a great ves’a, as a much adored vesya, with five older children, with whom she also became very attached.
By the time Gerdan was 16, he was an accomplished Psion, with not a few roguish skills. His kax’ves was just 20, and the Ves’a, on the whole, was highly respected by the Don. One night about six months into his 16th year, Gerdan’s ves’a was poisoned while celebrating at a local tavern. The poison weakened them with nausea and vomiting and weakness of the limbs, so when the rival ves’a came to kill them, they were too weak to fight back. The ves’a was sent by a rival cartel to strike a blow against Don Lugar, hoping to provoke him into doing something stupid. Instead, the would-be assassins from the Nebula Cartel did something very stupid; they failed to kill Gerdan, because they deemed him too pitiful and left him alive, and they let him see their faces. So, instead, they killed all his siblings in front of him.
When Gerdan got back to his Kax’Vee, she nearly went insane with grief when he told her what happened. Gerdan had never seen his mother like this, and vowed to make them pay. He then asked the Don for the right of revenge, which he granted. So, Gerdan spent two years perfecting his stealthy arts and acquiring the items and skills he would need to enact his revenge. Using a hat of disguise, Gerdan disguised himself as the kax’ves of the rival ves’a and “clumsily” snuck into Don Lohrdu Nebula’s harem, getting himself caught. When the guards tried to apprehend him, he killed two and knocked the third one unconscious, he then went into the harem and wooed a number of Don Lohrdu’s brides into leaving with him and convinced the others to claim that he (as his disguised form) raped them, and left with some of the brides. When Don Lohrdu found out, he was livid and declared the whole ves’a “Il-Muk” and demanded to know where his wives were. When the leader of the ves’a couldn’t produce them, Gerdan, who was there in disguise, offered to prove himself to the Don by torturing the information out of the ves’a; the outraged Cartel leader, readily, agreed.
Gerdan had them taken to a torture chamber and manacled into chairs, before asking to be left alone with them. Gerdan then revealed himself to them, and explained what he had done, before torturing them all to death.
When Don Lohrdu questioned him about the location of his wives, Gerdan banked on the fact that the Don wouldn’t be able to identify them, he had over 30 wives. He told Don Lohrdu that the ves’a had sold 12 of his wives to the Cometstrike Cartel, and that Don Riegle Cometstrike had laughed when they brought them to him. And apparently, the other six missing wives escaped custody and were on the run.
Don Lohrdu sent out search parties for his wives, and raiding parties for the Cometstrike Cartel. The ensuing battles between Cometstrike and Nebula left both cartels crippled to the point that, two years later, with the maneuverings of Gerdan, Don Lugar moved in and absorbed both the Cometstrike and Nebula Cartels, making Gerdan a Karr at the age of 20.
After seven years, Don Lugar Meteorswarm was struck by a sudden heart attack (he was morbidly obese) while dancing with one of his wives and was dead before he hit the floor. The ensuing power vacuum had Don Lugar’s six karrs scrambling for the position of Don, including Gerdan. With the help of his Kax’Vee, Gerdan maneuvered his way through hook and crook, and in two instances out and out murder, to be the Don of the Meteors Cartel.
At the time of the Solstice Pact, Don Gerdan Meteorswarm had led the cartel for the last 20 years, maneuvering to absorb numerous other cartels and forming the Dragan Syndicate. Donmagno Gerdan Meteorswarm buried his Kax’Vee when he was 70, and she was 101, and he died peaceably in his sleep one day before his 90th birthday. He left four pregnant wives, and outlived 13 of his 18 wives acquired from Don Lohrdu. In total, including those he outlived, Gerdan Meteorswarm had 27 wives, sired 92 children, and 217 grandchildren. And to his credit, at 89 he could identify all 336 of his wives, children and grandchildren, though he had a little trouble remembering which was which in his 16 great grandchildren. And by all accounts, the Donmagno was more than Vee, he was Kax’Vee to all of his children, and grandfather to theirs.

Don Gerdan was informally educated as a youth, mostly learning from the school of hard knocks. In his latter years, he was privately tutored by Selgorn Starrysky.

Don Gerdan’s current employment is as the leader of the Dragan Syndicate and one of the co-signers of the Solstice Pact.

Gerdan’s a highly accomplished Psion and Slayer. He has used these skills to further his own career, and protect those he loves.

Gerdan considers his largest failure and embarrassment to be the death of his ves’a.

Gerdan has lived through the mental trauma of witnessing his entire ves’a slaughtered in front of him.

Morally, Gerdan is a little, lax. He has no problems with murder, torture, robbery, vandalism, pretty much you name it. He does, however, hold women in high regard, and will not harm a woman or child if he can avoid it.

Gerdan loves children, he will avoid any situation that requires him to harm a child.

Gerdan’s strongly motivated by a need for security, and the love of his family. Though he can be heartless to those who cross him, those who have won his heart find him warm and loving. Gerdan will do anything his Kax’Vee asks of him, and he is hopelessly devoted to her, and his first wife Larra, whom he acquired as a wife from Don Lohrdu, even though she is 20 years his senior.

To say Gerdan is bright is sort of like saying the sun is bright, one of the great understatements. Gerdan makes geniuses look like idiots, and can make the greatest minds in Known Space feel like children. Also, he is incredibly charismatic and can make the simplest minds feel like geniuses. However, Gerdan is physically weak, and frail, though he is in great shape.

Gerdan likes children, and purity, and will go a long way to preserve innocence. He likes honesty, candour, and forthrightness and rewards those who are those things with him. He also appreciates bravery, especially in goblins. He strongly dislikes cowardice, and though he recognizes that most goblins are cowardly, cowardice will find no clemency with him.

Unlike most Bar’Tor, Gerdan is very emotional, and loves easily. On the other hand, Gerdan is in touch with all of his emotions, and he is just as quick to anger, and when he angers it’s homicidal. Especially, if he is angry over the injury to one of his family. Gerdan may be homicidal in his anger, but he would never harm one of his family, no matter how mad.

Gerdan is a bit of a hedonist. He enjoys the finer things in life, from tobacco and alcohol, to gambling and women, Gerdan is always engaged in some sort of vice. As for flaws, Gerdan’s biggest flaw is his anger, there’s no room for failure with Gerdan, either you do or you die trying. Returning as a failure is paramount to a death sentence.

Gerdan is a generally happy person, he smiles easily, and laughs readily.

Out of respect for his wives and children, Gerdan maintains a higher level of hygiene than the most fastidious of goblins, and expects those in his employ and family to do the same. He believes that if you are odorously offensive, you’re showing a lack of respect for those around you. And disrespecting Donmagno Gerdan Meteorswarm is worth your life. 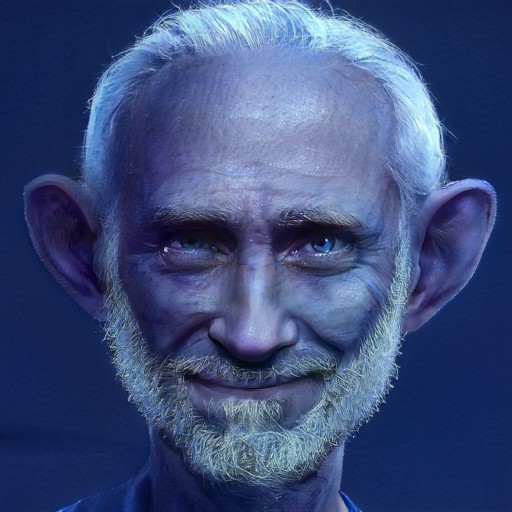 ~ Thank you for your support! ~
If you couldn't tell by the elves, orcs, and magic flying sailing ships in space, this is a work of fiction. Any resemblance to people or locations, living or historical, is purely coincidental, with the exception of Alberdingk Onestone, who may actually be an alternate dimension's version of a famous scientist, only as a gnome.
The Toy Soldier Saga is copyright (c) 1995 by Diane Morrison. All rights reserved.
Cover image: Toy Soldier Saga Part 1 by Aaron Siddall
Article template
Character
World
Toy Soldier Saga
Category
SummerCamp
Author
ErinRigh
Publication Date
4 Oct, 2020
Creation Date
1 Oct, 2020
Last Update Date
29 Nov, 2021
Visibility
Public
Views
171
Favorites
4
Comments
0
Work In Progress