In the third year of my undergraduate Creative Writing degree, I was taking an Advanced Fiction module with a large group of others. As we were sharing our writing with each other, it came to the professor's attention that a lot of people were struggling with dialogue - and not just the advanced stuff. No, these final year undergrads were struggling with the basics.   So that's where we'll start. With the basics.

Dialogue (/ˈdʌɪəlɒɡ/), noun: Conversation between two or more characters in a literary work; the words spoken by the actors in a play, film, etc. Also: the style or character of the spoken elements of a work. 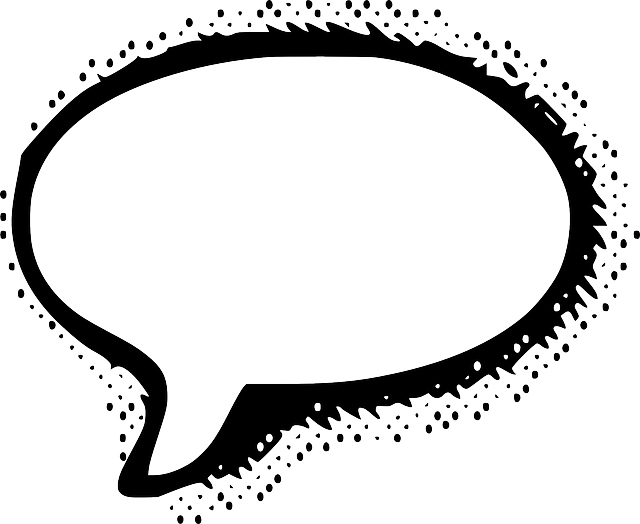 by OpenClipart-Vectors
(Actually, it has several definitions of the word 'dialogue', but this one is the most relevent to our interests.)
I would argue that dialogue (in a purely mechanical, formatting sense) could also cover words a character speaks whilst alone. Thoughts, rather than spoken speech, often have their own formatting, however, so I will cover those in a later article.   In a piece of writing, there are two different types of dialogue you need to be concerned about: direct dialogue and indirect dialogue.

Direct dialogue records a conversation word for word. This is probably the form of dialogue most familiar to readers, and the one we use most in our writing. It can be an extremely useful tool for both character and plot development.

Sometimes called 'reported speech', indirect dialogue summarises a conversation in one or two sentences. This is useful for mundane or less important conversations that don't need to be quoted word for word.

They exchanged greetings and Clara apologised for being late. 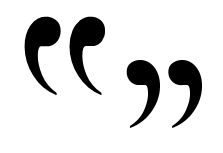 In English, direct dialogue is surrounded by quotation marks. Most often, these are double quotation marks, though in some published works you will see single quotation marks being used. Which one you use makes no difference, as long as you are consistent throughout the whole work. Personally, I use double quotation marks in my fiction writing, as I associate single quotation marks with academic work and quoting passages from books.   Other languages have different formatting norms for writing dialogue. For example, French authors often use guillemets (») around sections of dialogue including one or more speakers (with dashes (-) to indicate new speakers), as well as a mixture of indentation and italics. If you write in a language other than English, what I say here might not apply to you.
The most important rule for formatting dialogue is that every time a new person speaks, start a new line. If another character does an action in the middle of someone's speech, put that on a new line. This is to help the reader keep track of who's speaking and cuts down on the use of dialogue tags (more on those later).   For example:

"I don't understand what you're saying," Adam said, wringing his hands.
Roger didn't reply, continuing to pace the room.
"Please," Adam continued. "I need to know what happened."
"It's classified."

One of the things I see writers struggling the most with is whether to use a comma or a full stop (also known as a period) in dialogue. If the line of dialogue is the whole sentence, use a full stop (or a question mark or exclamation mark) at the end. Always place the punctuation inside the quotation marks.

"What are you doing?"

If your line of dialogue is followed by a dialogue tag, use a comma. Never capitalise the pronoun or verb here, but still capitalise proper nouns such as names. The comma can be switched out for a question mark or exclamation mark without a difference in rules.

"What are you doing?" he asked, trembling.

If another line of dialogue follows this tag, capitalise the beginning.

"What are you doing?" he asked, trembling. "Please."

If a line of dialogue is followed by action, a full stop (or question mark or exclamation mark) is used inside the dialogue tag and the action sentence is capitalised.

"What are you doing?" He squeezed his eyes shut.

The rules are similar if you use the dialogue tag or action first. A comma follows a dialogue tag, whereas a full stop follows an action sentence.

He squeezed his eyes shut. "What are you doing?"

All of these rules can be combined into longer and more complicated pieces of dialogue, as long as you remember to use a new line for each speaker.

"I don't love you," said Anna, her voice cold. She turned away. "It's over."
"What are you doing?" he asked, trembling. He squeezed his eyes shut as tears threatened to fall. "Please."

Addressing Others in Dialogue

If a character is directly addressing someone in dialogue, always place a comma before or after their name, depending on the sentence structure. If the name is in the middle of a sentence, this means you place a comma both before and after the name. It does not even have to be a proper name - an honorific or a pet name also count as names.

"I don't know what you're talking about, Greg."

Characters aren't always polite enough to make formatting easy. Whether they are interrupting each other, themselves, or getting distracted mid-speech, sometimes the punctuation situation is slightly more complicated.   If a character is interrupted by another character or by an outside force, you can cut of their dialogue with an em rule (or em dash) (—) to indicate an abrupt stop. Words can be broken off in the middle, but think carefully about the sounds and where it would make sense to interrupt. For example, you wouldn't cut off a word like 'church' off at the 'c', but at the 'ch'.

"There's noth—"
A loud crash echoed through the house.

If dialogue slowly trails off, ellipses are used instead.

"But I thought..." Her voice trailed off.

Dialogue is something that seems simple, but it can make or break a book. In the next article, we will be looking more at dialogue tags, the word 'said', and the much-maligned adverbs.
Dialogue
Dialogue 2: Tags and Adverbs

Please let me know if anything needs clarification or if you have any questions.   What else would you like to see covered in the series on dialogue?

Super useful already, thank you so much for making this for all of us :D

Future ideas might be something like stuff to be careful with, like accents or difficult type of speeches. I remember reading some stories where it was pretty much impossible to figure out what anyone was saying :D

I will also give thanks for this amazing article. Well done! I imagine this series is primarily covering the basics, but I'd love to see an article on using style and word choice in dialogue as a character trait. for example, does this character use contractions more, or do they break them up. Will they omit words in a sentence that are easily implied, or will they say as much as possible. Maybe even catchphrases? IDK I'm just spinning wheels lol I don't see it often and it's also a really helpful tool when avoiding overuse of dialogue tags. I'm bad at that...   Awesome work and again, thanks so much for doing this.

Thank you! Something like that is definitely planned! :) That's one of the fun things about dialogue! :D

Nice overview :D I also see a lot of new writers having troubles with the basic of dialogue, I'll have to save the link to point them here.   Regarding the use of double quotation marks vs single quotation marks, I've read that double is the US standard while single is the UK standard in the publishing industry. I think I read that in the Oxford Style Manual but I would need to check to be sure. Anyway, I use British English in my writing, but like you I use double quotation marks since I find it more elegant :p   I think talking aout dialogue tags next would be nice (which tags to use and which ones to avoid, trying to avoid unnecessary dialogue tags and use action tags instead...). I also like all the ideas Dylon has. I would also add the use of accent (e.g. French accent) in a dialogue and how to represent it as this is one of my pet peeves as most of those are unreadable for me :p (and most written French accents are also wrong...)

I'm so glad you found it helpful!   The single quotations hurt me in my soul, but I think you're right. I just can't use them in anything other than the academic sense - dialogue looks wrong to me without the double ones!   The use of dialogue tags is definitely going to be the next topic. :)   Accents are a great idea, though I think most of my advice for those are *don't* write it out phonetically. Hahaha. Trying to read Wuthering Heights in university was like reading a foreign language in places. Thanks for the ideas. :)

Yesssss! This is what I was talking about <3 Thank you! You, my dear Dr Books, are a real saint too.

You're amazing for doing this!

Aw thank you! I hope it's helpful to people!

Will you be doing an article on finding character voice? That's where I really struggle with dialogue because I am stringent with my grammar and never can distinguish voices. But I imagine this is hugely helpful with how detailed it is.

Definitely will have an article on character voice in the dialogue series. That's a really important part of it! :)

Grammar lessons ended decades ago so this is a great primer on things I had already forgotten. I took a few advanced Lit classes but no advanced writing so this was incredibley useful. You know you are a geek when articles about grammar gets you excited. :-)

This is such a great article! So clearly written (and pleasantly formatted)! I can't wait to see what other gems of wisdom and knowledge you will be sharing with us. <3