"This is like playing chess with someone who doesn’t know the rules. They’re just moving their pieces and hope for the best!"

Eohelm is the talented strategist of the team. He is patient and friendly, and likes to hear people's stories. Has a great interest in history because he tries to learn from past battles.   He considers Pepper a good friend. They are quite the opposites; Eohelm is patient and level-headed - he thinks first and acts later, whereas Pepper is more temperamental and tends to act first and think afterwards. Despite being so different, they get along well.

After escaping Northern Africa and the fighting there, Eohelm joined the Falkendorf team after some more conflicts and a lot of wandering around. After his team cannibalized itself, he stayed with the Tanking League instead.

It's always been a mystery to his teammates why Eohelm seems to be objectively smarter than even his most sensible peers. For a regular medium tank, his ability to plan ahead and analyze is indeed uncanny. Sometimes, others joke about him being an "MBT in a medium's hull", and with that they may be closer to the truth than they realize.

Always tries to stay optimistic, even when things are heading south rapidly. Even when his own optimism fades, he tries to keep up the morale of his teammates.

"We only came close to dying six or seven times, which I thought was pretty good."

Addicted to music, and gets very distressed when he can't listen to it for whatever reason.

Has a cousin: Whisper, the T21. Eohelm never told anyone what became of him.

Gregarious and loves to be around other people. Will always have an open ear for others' troubles and offer advice.

"At least back then, people still knew what an 'easy' victory looks like," Eject grouched.   Eohelm chuckled.   «Well, if you think my strategy sucked, just tell me outright.»

Well liked by the others, even though he has concerns about some of his teammates. Eohelm is in fact the one Falkendorf member who gets along with more teammates than any other member. That doesn't mean that he likes all of them, but he tries to keep the team spirit alive - a fight against windmills, as he fails to acknowledge until it's too late and he has to. 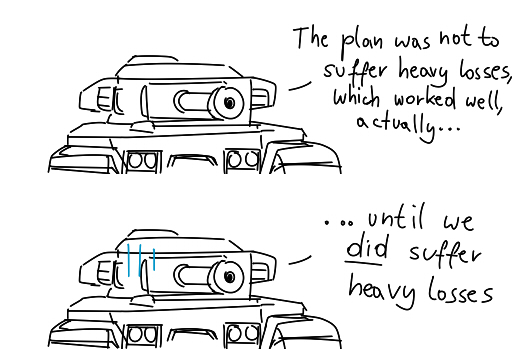 Despite getting many offers, Eohelm has always declined being in charge of his teams. He seems to be content "just" being the lead tactician or second-in-command at most. When urged further to take command, an outright aversion becomes apparent, however. Where this aversion comes from is unknown; but it seems like something has happened in his past that caused it.   Eohelm has been part of the Falkendorf Team for a long time, but his name is known beyond his team - there are many in the North and even some beyond that have heard of his strategic brilliance. Every now and then, he even gets offers from other teams to join them instead (which once culminated in a dramatic kidnapping incident - a story Eohelm chuckles about nowadays but was no fun for anyone involved at the time).
Main Stories

The Hummelverse and The Tanking League are my creation. All content - including art - on this page was created by me, unless otherwise stated.
Want to submit content like fanworks, ideas, characters? Please note that you are accepting these terms if you do.
Back to top
Article template
Character
World
The Hummelverse
Category
Main Stories in Characters
Author
arty
Publication Date
4 Apr, 2020
Creation Date
20 Feb, 2018
Last Update Date
23 Feb, 2020
Visibility
Public
Views
872
Favorites
6
Comments
3
Work In Progress
Tags
tanking-league falkendorf-team

"WE ONLY CAME CLOSE TO DYING SIX OR SEVEN TIMES, WHICH I THOUGHT WAS PRETTY GOOD." I love Eohelm. He seems like a really nice guy, just trying to keep everyone's spirits up. I hope he's never without music often. Is there any particular reason he gets so distressed without it or no (or is it a secret)?

I'm glad you like him! :D The story behind his love for music is partly a secret, but it has to do with his cousin. Whisper always listened to recordings of his favourite songs during battles. They made him feel connected to what he felt was his home. After his death, Eohelm collected all the songs and listens to them a lot in memory of his cousin.

Aww man, poor both of them. That's kind of sweet, though!

Heh, I adore Eohelm.   So what kind of music does he listen to?   In fact, are there tanks that are musicians as well?   I would LOVE to read a full story about the kidnapping attempt!

I'm glad you like him! :D   He listens to a rather random mix of music, but always the same songs. Think something like the UK charts of the 80s!   There are definitely tank musicians. I like to think that they also invented a new genre that is mostly edited together sound clips of cannons firing and shells hitting armor. Of course not every tank musician would do that genre. They probably do all sorts of genres. Lots of covers of old human songs, too.   And dang, now I kinda want to WRITE that story about the kidnapping incident. :'D

I suddenly have this mental image of a tank conductor in front of a tank orchestra!   Well, if you write that story about the kidnapping incident, I'll certainly read it!

I would like to imagine that the music are the tank songs by Sabaton (Ghost Division, Panzer Battalion, etc.)

Rather far off the mark, but that's a funny headcanon :D