The two most northern clans, Saar-Kahn and Gaoia, have formed an alliance called the Sovereign’s Oath – named after the ceremony through which chieftains Razameaman and Rábaiamon pledged allegiance to the The Blood Daugther.

The election of Tharaban as High Chieftain, instead of the Saar Iaholas, created a rift between the northern and southern clans; a rift which has since grown wider, although the Karvosti loyalists have failed to notice it (except that they hear less and less from the Saars, Gaois and Enoais). But now the Sovereign’s Oath is ready to act. With cunning and force of arms, they are secretly trying to coerce Clan Enoai into joining their alliance, and have sent agents south to gather intelligence and sow discord between Ambrians and barbarians.

The Sovereign’s Oath strives to unite the clans under the red-stained banner of the Blood-Daughter and reestablish Symbaroum, which cannot be done without a clear common enemy: Korinthia! 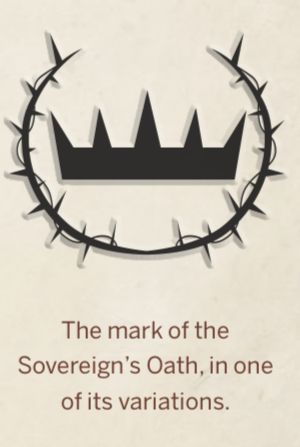