Like House Brigo, Soleij can boast many prominent individuals, even though their house has never had particularly high status. This is of course due to Baroness Eudela’s son, Demeon, First Father of the Sun Church. Jeseebegai (and the secret he shares with the Queen) is why their house was allotted much more land than the other baronies, and it is thanks to his connections that the mem- bers of his family often reach positions of great power and influence.
Property

The barony of Soleij is larger than most counties. Sure, it is plagued by plunderers, refugees, and the predators of the Titans, but there are also lush croplands in the north. In addition, the snow- white marble being mined in the region’s hills is in high demand among the kingdom’s elite craftsmen and merchants.

First Father Jeseebegai has already been mentioned, as has the capable Baroness Eudela. Jeseebegai’s sister Levia and his cousin Mergoi were both taught by Ordo Magica; the former has remained there as Master of the Order, while the latter is now leader of the newly-formed Ordo Ambra, financed by the Count of Brigo.

House Soleij has always been closest to the Sun God. What most people do not know is that it was Eudela’s father, Baron Edor, who founded the Autumn in the County of Brigo, with the Moonlight Monolith as a prominent feature of the landscape. 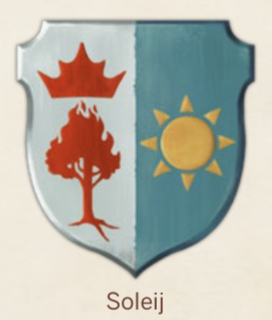