Baron Valtar Brigo fought side by side with King Ynedar during the first half of he Great War, and was later appointed commander of Korinthia’s private guard. The bond that was forged between them made House Brigo rise in status and esteem, which became particularly evident when the King took Valtar’s sister as his bride. Now they are one of the most powerful families in Ambria, and their representatives are found at the top levels of many Ambrian factions.

Property The count of Brigo is slowly building his for- tune, largely thanks to his county’s fertile lands and close proximity to the capital. The famous Moonlight Monolith has not yet contributed to their flourishing fields, but one day it might, when Ordo Ambra has figured out how best to utilize its powers.

Count Edogai’s secretive brother, Father Matheo, is without a doubt one of Yndaros’ (and therefore Ambria’s) most powerful figures; as a member of the Queen’s, the city’s, and the Cathedral of Martyrs’ ruling bodies, Father Matheo knows everything that happens and has a finger in most of it. The Count’s son, the explorer Iasogoi, is one of the realm’s most popular celebrities, and his mother, the old Countess Alevia, is known for being the only highborn noble who has insisted on staying in Alberetor.

Since the outbreak of the Great War, House Brigo has drawn ever closer to the royal family and, consequently, other houses close to the Queen, such as Herengol and Kalfas. But Father Matheo’s ambitions and Count Edogai’s inability to stand up to his brother are about to turn all of this on its head – if all goes according to current plans, their future allies will be named Vearra, Lethona, and Melion. 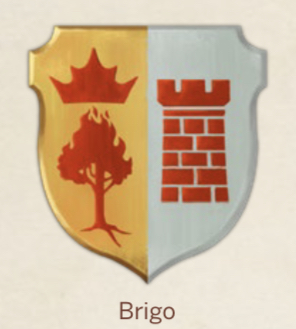