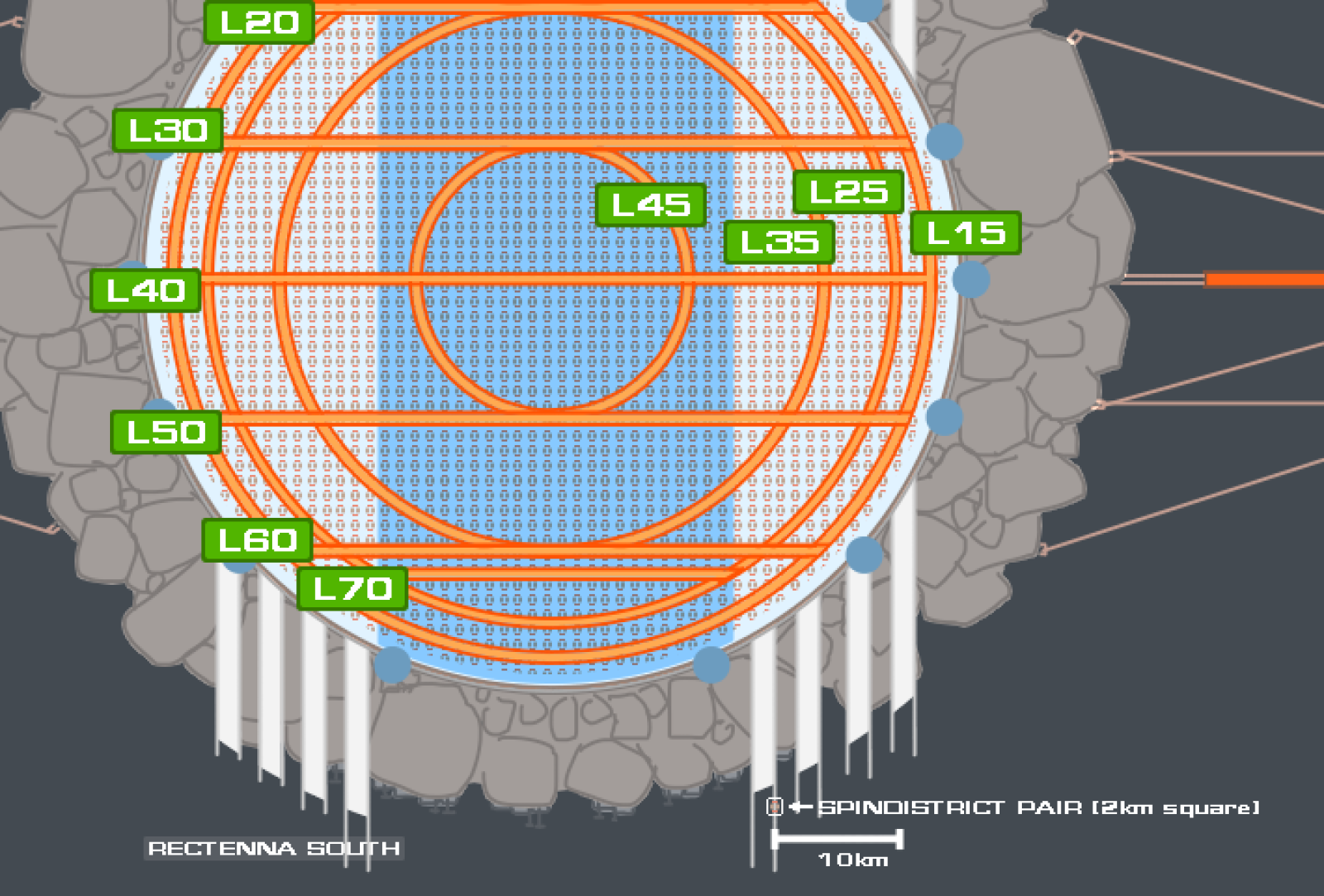 Spindistrict is another name for a centrifugal space station, using centrifugal force to create artificial gravity. A "spindistrict" in particular is usually just one of many other connected spindistricts, together forming a larger city. Spindistricts are a basic sub-unit of zero-gee urban structures such as gravitational balloons / sealed caverns.
The concept of creating artificial gravity via the centrifugal force traces its roots to the Capitalist Age. The O'Neill cylinder, a classic design, was originally intended to be 6 kilometers wide by 32 kilometers long, with the entire cylinder rotating to produce 1 gee of gravity. However, such a huge steel building supporting billions of tonnes of soil and atmosphere against the force of its own artificial gravity and air pressure proved impractical for the materials science and engineering of the era, and the long cylinders of O'Neill's original vision would have been too unstable to rotate properly.   Instead, habitat designers opted for smaller, shorter centrifuges - and a lot of them - which could be packed many times over inside huge air-filled spaces like the O'Neill cylinder, and these came to be known as spindistricts. This also allowed a drastic increase in population and city density. Instead of constructing cities only on the inner skin of the whole habitat, smaller districts allowed the entire volume to be filled with people and industry. 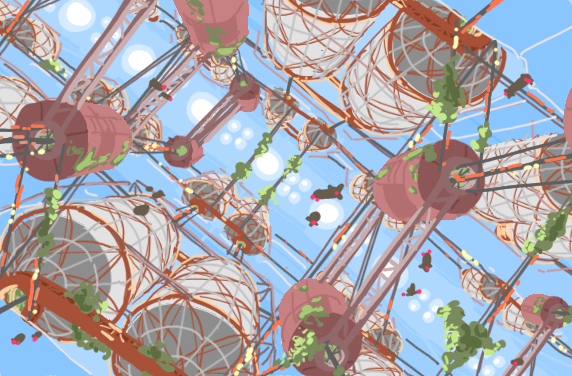 Above: A view of many interconnected spindistricts inside the open-air caverns of a gravity balloon megacity. Sunlight streams in through large windows in the far distance.
Spindistricts are typically joined together by cables, bridges, pipeworks and air traffic routes. Other zero-gee infrastructure and cityscape built for people who work (or live) without gravity also clutters the open air between districts.

Besides housing people and infrastructure in a zero-gee environment, spindistricts also serve as gigantic air pumps. Any rotating, open cylinder becomes a centrifugal pump and spindistricts have some enhancements to help them pump efficiently, because pumping air through the cylinder also keeps its denizens cool enough to survive. (A typical small spindistrict can often support up to 20,000 humanoid sophonts - this is about the limit possible before heatstroke becomes a risk, if the district is cooled only by passive air cooling.) Additionally, spindistricts are often joined together in close pairs that counter-rotate parallel to each other. This creates a net aerodynamic thrust through the gap between them, and adds another dimension to their pumping effect. For this reason, spindistricts are the primary means of structuring the climate of large zero-gee cities. Their role as colossal pumps means that they can distribute cool air throughout the city and move hot air back toward the coolant system, and can be used to create more intricate microclimates and weather effects.   A large fraction of modern spindistricts geared toward agricultural or agroforest (cultivated forest) are operated at very low gravity - less than 1/10 of a gee. This allows open-air districts to be built without complicated friction buffers (see Manufacturing section), which would also require that the district taper off at both ends. At low gravity, a district only needs to spin at a leisurely pace and the district can be completely open to the outside, a plain non-tapered cylinder. This allows for striking vistas of the open sky and easy lighting. 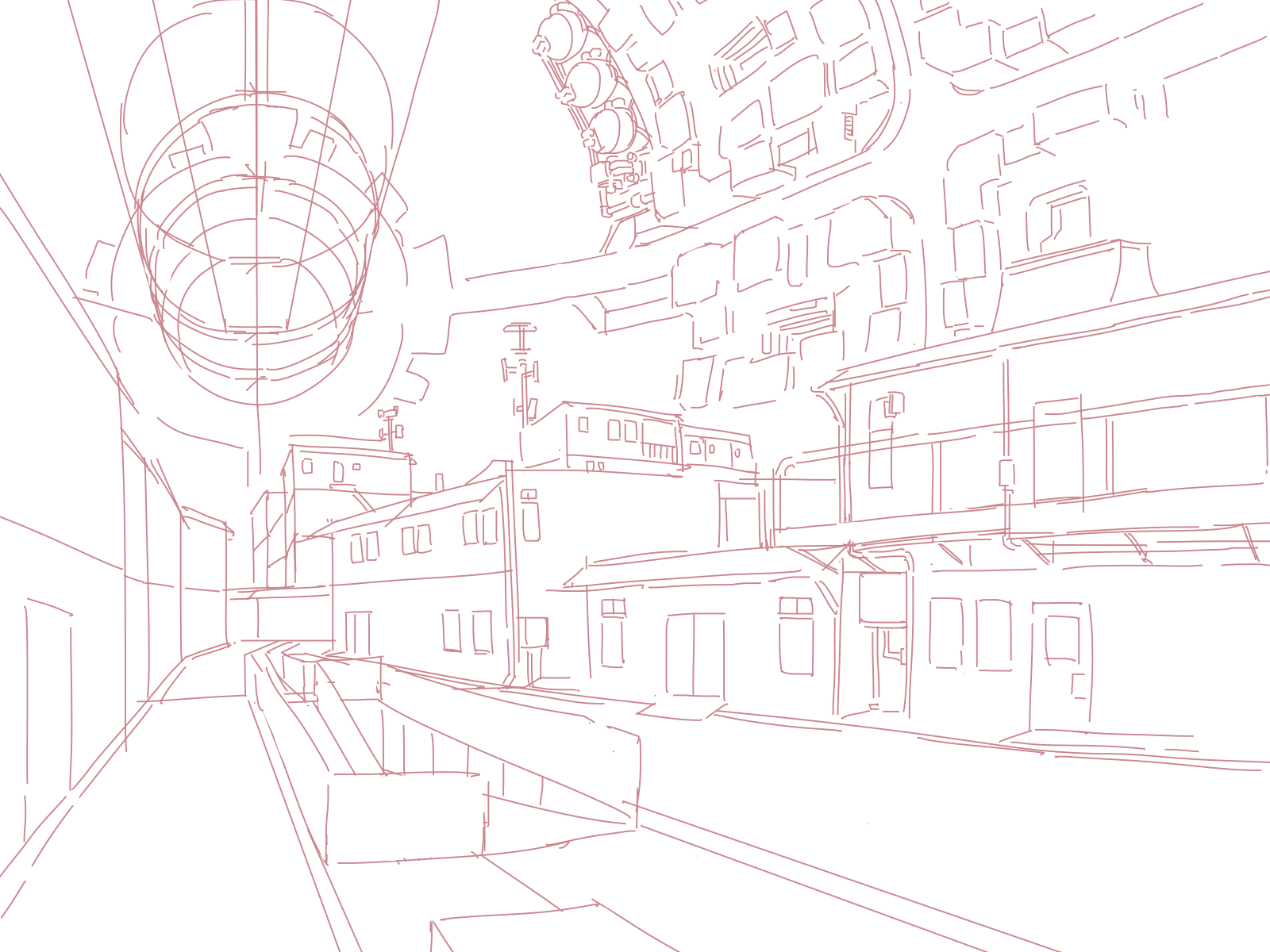 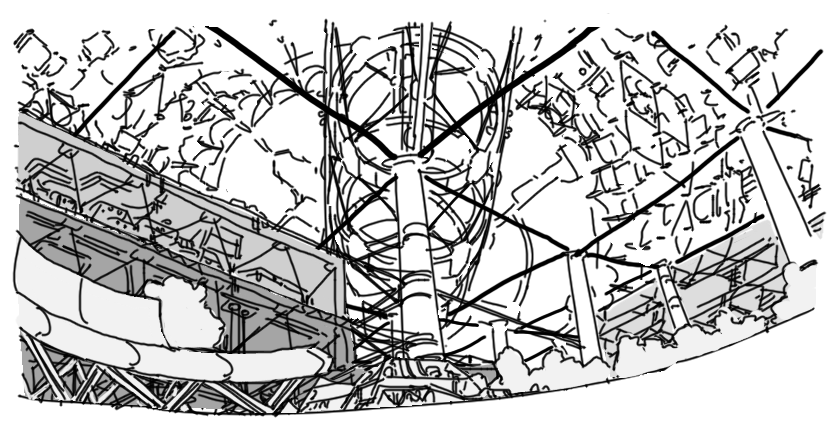 Construction of a Spindistrict requires large quantities of steel. For a typical "small" district, 500m in diameter, structural strain dealt with by the centrifuge is comparable to a bridge.   Spindistricts can be built to operate in hard vacuum, but it's much more common for megacities and their constituent districts to be built inside a large sealed container of air like a gravity balloon or sealed cavern. 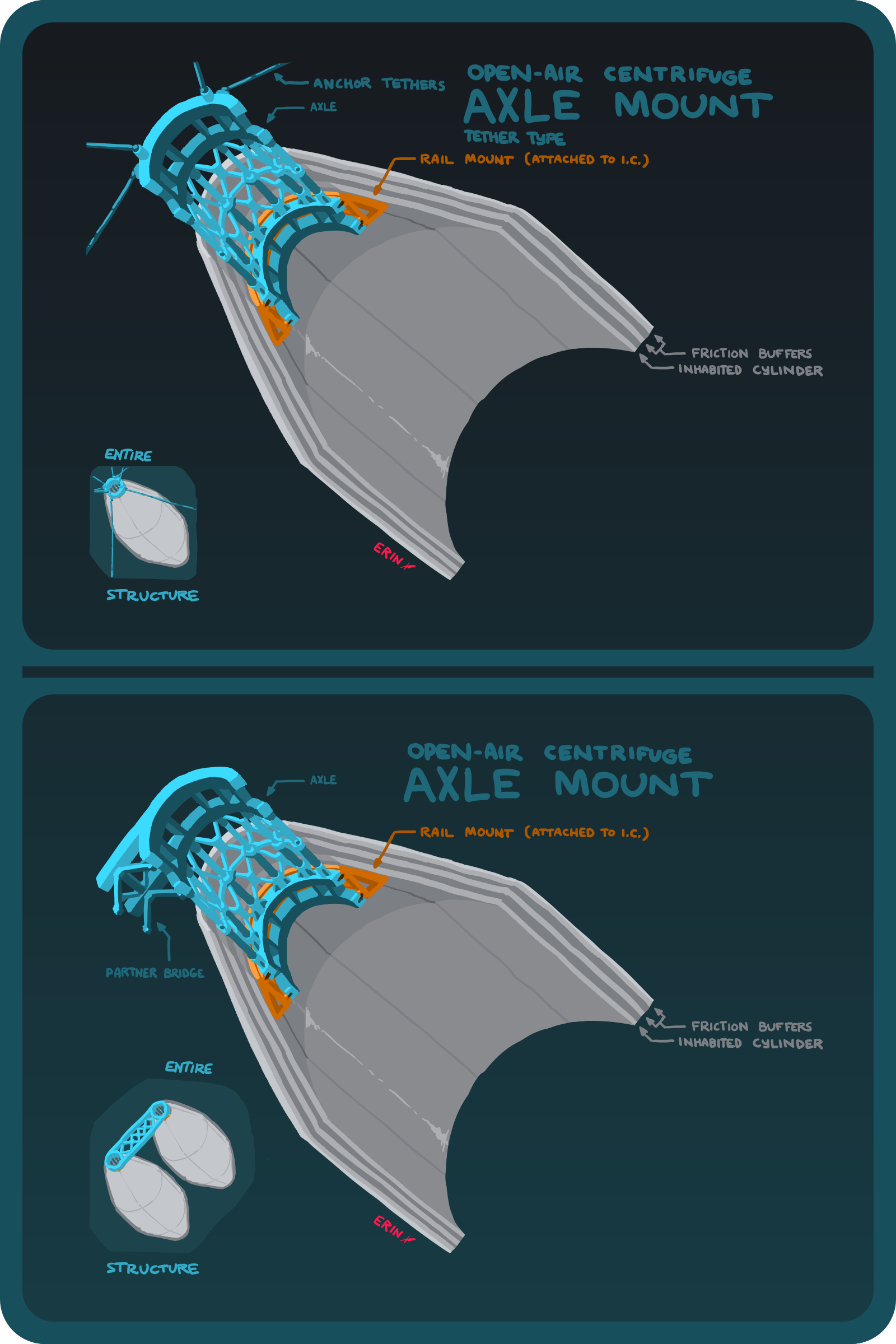 Above: Overview of the basic architecture of spindistricts, including friction buffers and torque axles. A spindistrict is like a wheel; it cannot turn without something to turn around. Torque axles also serve as the stationary docking hub of the district, so they have to be attached to something that can absorb the district's spin. In small habitats, torque axles are usually connected to the heavy asteroid rock itself. In large cities, two spindistricts' torque axles are connected by a bridge, allowing both habitats to cancel out each others' spin across the bridge.
Access & Availability
Spindistricts are ubiquitous across the known multiverse anywhere there are large zero-gee habitats. It is estimated that 80% or more of all people live in spindistricts of some form.
Complexity
Requires an interplanetary infrastructure capable of asteroid mining and manufacturing its own habitats for populations of 10,000+.
Discovery
Centrifugal habitat concepts were known by the early 20th century, but the first tiny rotating space station did not fly until the middle of the 21st. Larger spindistricts of the kind that form the basis of modern megacities were first built in the 2200s inside the Phobos Municipal Cavern.