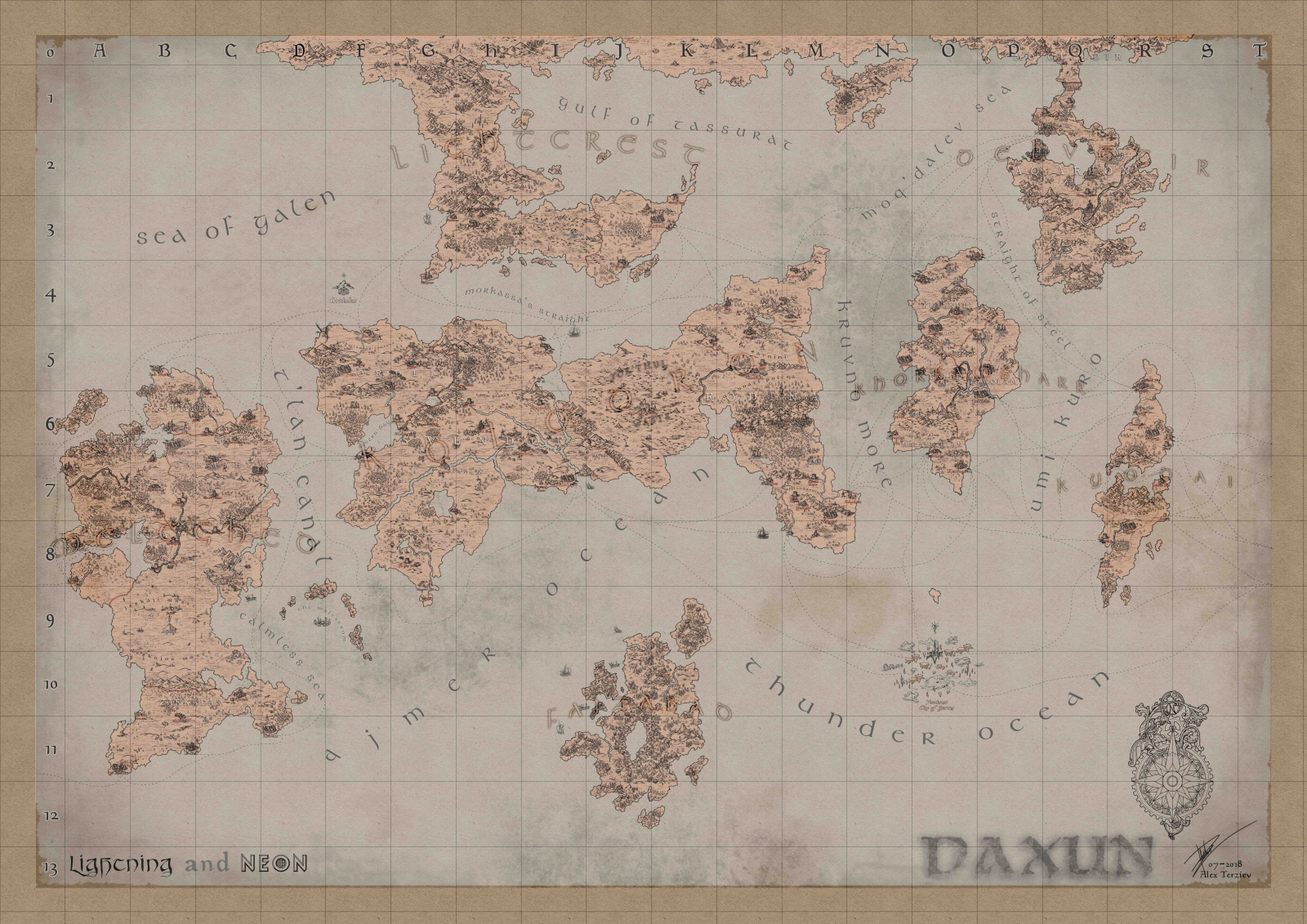 Alex Terziev
The world of Daxun.   Once the gleaming jewel of the Prime Material Plane. It's surface blanketed by an unending cityscape. It's skies pierced by spires of impossible height. It's seas gleaming like jewels from the lights of countless ships.   A veritable utopia for the many races who called this planet their home. They had achieved harmony through mind bending technological progress that rivaled the gods of legend.   It had been nearly four millennia since the last major conflict had taken place on Daxun. No one knew who started that long forgotten war but all knew that it was Human intervention that ended it and led the world into the age of prosperity that it now enjoyed. This peace however was not without it's difficulties. Overpopulation and an energy crisis were at the forefront of political and every day life. Even though every citizen was cared for by the central system the lack of space was becoming a problem. To this end, a coalition of Dwarven, Elven and Human scientists were working on breaking the final frontier.   The Astral Sea, the unending Beyond, the salvation for all who dwell on Daxun. For this dream to become reality a new energy source was proposed by the most brilliant mind of his time.   Eam Mallon, an ancient Elf stood waiting behind the curtains ready to face the holo-cams. Today was the day he would have the honor of announcing the completion of Project Awakening, the dream that he had proposed almost three hundred years ago. The research was done, the prototypes were made, the reactor was ready and the ships that would be their salvation were already under construction.   As he walked onto the stage, the roar of the crowds gathered was deafening, the intensity of the stage lights even on a day as bright as this one was blinding. He cared not for these things, for even on this world of endless wonder he had created a miracle. And would now share it with the world. His voice, carried over the entire planet by the holo-networks, was resolute and firm. His words carefully prepared and calculated. His intention clear and his gaze... his gaze drifted. Was there something wrong with the climate net? No, it was definitely there. As he looked to the horizon a band of black had begun to form between the magnificent spires of the city. Expanding with incredible speed, a darkness that was all consuming spread across the sky. No stars, no sun, just black.   As the crowds gasped at this phenomenon, many thought it a dramatic effect to accompany the speech and spectacle of this day. All of them were wrong. As the darkness over Daxun became complete, the stars, absent before now flared up in bright shades of red and orange. Small infernos that grew larger with each passing moment until the sky was ablaze with fire. Terror gripped Daxun as it had never done before, for not a single inch of land was spared what was to come.   Beams of searing light rained down on the world. Death, fire and brimstone covered the planet. Scorched earth was the only fitting description that came to those that had the misfortune to survive the first waves of immolation. Annihilation, absolute and indiscriminate had dashed the hopes and dreams of the world that not days before had nearly broken through the final frontier.   After what seemed an eternity, the fires subsided, and the stench of smoke and death blanketed the planet. Those who survived were few and far apart. The once prosperous people were reduced to searching for scraps and the death toll would grow in the years to come. What once was considered the jewel of the universe was now reduced to a smoking rock.   But life is not so easily snuffed out. Despite the terrible disaster the races of Daxun found a way to crawl back into existence and are now retaking their world. But this time with a new power that seemed to be granted to them after the apocalypse. The power of Magic. Every living thing on the planet seemed to be infused with it. Changed by it. And they found a way to use it. Slowly the technology of old was replaced by the new powers that were granted to the peoples of Daxun. But all of them would remember what was now known as the Day of Burning Skies

Lightning and Neon has 4 Followers