Varell is a powerful god associated with order and he is often considered the patron of Knights and Paladins. He is an oddity among the gods of Isekai because he has only ever been known to have one name and one form, regardless of who he has appeared to or where he makes it painstakingly clear that he is Varell the Living Law. Varell is the pinnacle of the Pantheon of Order and is considered to be the definition of law even among the other gods. Varell's personality is often noted as being virtuous to the point of uncaring and removed, objective to the point of cruelty in the eyes of some though worshipped devoutly by those that pursue justice. He is depicted as an angelic knight in golden armor with sweeping wings of white and heavenly armaments that destroy that which he deems chaotic or evil on a whim. This god is often depicted in combat with darkness being dispelled around him, notably obsidian and amber are used heavily in these depictions to create a contrast between divine light and chaotic darkness.   His tenets and standards involve keeping vows, honesty, the rule of law, unity, and the needs of the whole over the voice of the few. The attitude of Varell can be learned best by examining the rules of warfare and armed combat, one of the oldest documents to be found among the civilized races that details the articles of war between themselves. Those that worship him and obey his tenants are almost exclusively members of a knightly order, government officials, judges, Paladins, or lawmakers.

Varell is involved in only one domain though he has been invoked in others despite his adherence to the Order Domain exclusively. While not a proponent of War or Life, he is often called upon by Clerics and priests of those domains due to his opposition to chaos and darkness. It is well known that if he deems a cause righteous that he is not above bestowing power on individuals that fit his definition of Law and Order though they may find that they quickly fall out of his favor. Whenever Varell is revered, it is done in a legalistic manner with specific attention to ceremony, oration, intent, and prior supplication as if petitioning a noble instead of a deity.

Varell is considered the pinnacle of the Pantheon of Order, he is the embodiment of law and his very presence causes chaos to dissipate. As the pinnacle deity, he wields the most power in this pantheon and his followers call upon him for protection and to preside as a power over oaths and spells that bind agreements between entire nations. Orations about him dwell heavily on his opposition to darkness and his destruction of the evils that would seek to anchor themselves to the realm of Isekai. All other gods of Order are considered more specialized and their powers held subservient to Varell's judgment in terms of legality. When it comes to Order, his focus is on pacts between the gods, between nations, with those that pledge themselves as Knights and all that have a hand in enforcing or carrying out the law.

The exploits of Varell are contained in scrolls that can be found translated into most languages though they have a primary presence among the Elder Races. This religious text involves exploits of Varell and writings of what is considered law and conduct that are widely regarded to be fair treatment of both allies and enemies. The scrolls of Varell are known as the Accords of Conduct and spell out not only good conduct but what can clearly be defined as chaos and evil by most reasonable creatures. There is also a definitive list of punishments and penalties that consumes nearly half of the Accords of Conduct though it is seldom directly referenced outside of capital punishment or war crimes.

The primary symbol of Varell is the balanced weight, one made of darkness while the other is made of light. Often these are created using amber and obsidian to create a contrast between the dark and divine that must exist though the scales are always absent of weights and empty. Other symbols include the angelic wings of white that Varell is known to possess.

The holiday dedicated to Varell, known as the Day of the Accords, is the third day of Fall's Evening. It is on this day that many civilized races hold councils of law and secure meaningful diplomatic discourse with one another to affirm trade agreements and long-standing alliances. In the same vein, it is often seen as a day of peace wherein townships and countries will attempt to establish new relations with one another and work towards greater stability and unity. On a smaller level, this is the day that all notable combat schools will both graduate students as fully-fledged Knights and admit students to begin the trials of being a Knight, Paladin, or Warrior of their respective kingdom. 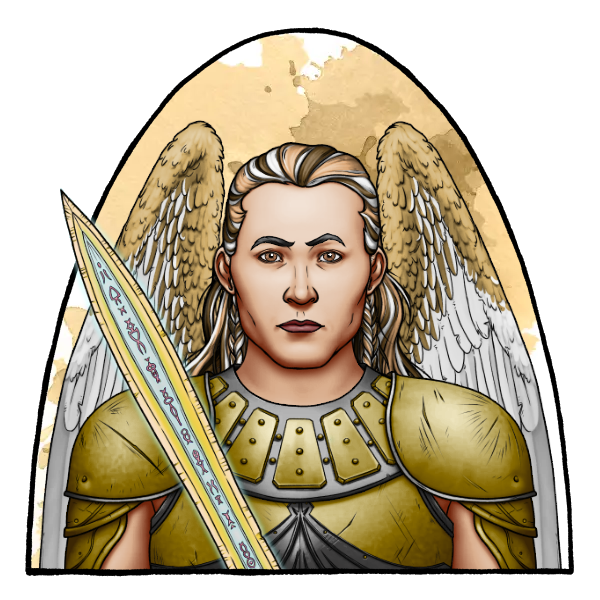 The word of Law is that which shall not be broken, to accept law is to pledge a divine oath wherein you have determined evil not only in the course of others but of yourself through conviction and knowledge of the divine that casts all else into shadow with brilliance.   Word is such that it shall never be broken, take up your oaths and let them empower and bind those that would destroy all that is built.   Stand as guardian over those that shelter themselves in the light, stand as executioner over those that wretchedly cling to the darkness but always stand in the unquestionable balance of justice.   Loyalty is first to the Law, and second to none. Those that are worthy of loyalty shall always pursue greater order, greater justice, and greater light with which to cast out the chaos of lawless evils.   All actions have either merit or penalty, none shall receive the sight of Varell nor wield the true power of light until they walk through all judgments and recourse to achieve merit. Even a single shadow is darkness.
Gods & Goddesses

I love the layout of this article and the quotes that you used. It is really amazing!, Great work

Come check out my entry for this month's challenge: Children of the Goddess of Love
Powered by World Anvil