There is a peace found at the top of an unexplored mountaintop that cannot be attained elsewhere. But there is also a satisfaction in sharing that peace with others that ascends beyond all other feelings.
— Traenas Elrel

Another foot moves closer to the summit as the rope around his waist goes slack. He pulls up his anchor, moving it higher, before placing another foot forward, testing the strength of the stone before gently beginning to put weight down. Small pebbles rain down the mountainside as his weight shifts them, but the foothold he has found holds, allowing him to move further forward, up to a peak that no man had scaled before. He was above the tree line, above where the heavily furred goats and predators of the Spine of Kallex treaded. He had ascended as close to the heavens as any man had ever gone, in reach of the wingtips of the dragons that flew so close to the sun.   Hours passed and he had finally reached the summit of a beautiful peak, his eyes gazing upon the rugged peaks of the Spikes of Kallex that were wreathed in a shining golden light as the sun began to set on the magnificent peaks. He would camp in a cave that he had found a short distance below for the evening before beginning his descent in the morning. The long hours of climbing had been worth it, he had completed his climbs of the peaks of the Spine known as the Spikes of Kallex, the tallest mountains in the range. His expeditions were successful in mapping the region, even if the journey had been dangerous.   One of the few mountaineers that climbed in the Spine of Kallex, and one of even fewer still that did the dangerous climbs alone, Traenas Elrel was a mountaineer and geographer, using his climbs and conquests as opportunities to map the world from the heights of dragon flight, a height that few ever experienced. His greatest conquest came in conquering and mapping the Spikes of Kallex, the multiple peaks of the Spine of Kallex that reached above 15,000 feet.

Born of a Human mother and Elven father, Traenas Elrel grew up in the Elven Forest, learning the ways of the Outlands and the Rangers that often called this area home. From a very early age, he was fascinated by the rugged peaks of the Spine of Kallex, often painting and drawing their likenesses in the small journal that his father gave him. His early years were spent exploring the wilderness of the Elven Forest, but his time there would not last.   The life of the Outlanders is not an easy one, filled with death and danger much like the lives of the Barbarians of the Spine of Kallex. His father died during a hunting trip, which led his mother to return to the safety of the Human Empire and her people. This change was a culture shock for Traenas as he did not often fit in due to his Half-Elf heritage, but it is in one of the libraries of the Human Empire that the mind of a geographer was born.

My life has been full of adversity, dips and peaks of good and bad, much like the mountains. Maybe that is why I am drawn to them, drawn to the rugged peaks of the Spine.
— Traenas Elrel

Through study and a formal education at one of the many schools in the Human Empire, Traenas grew his love for the mountains into a profession, learning about geography and mapmaking, as well as geology. His studies led him back to the Spine of Kallex and the home he had once had. As his schooling drew to a close, he chose to return to the Elven Forest and the Outlands, the home of his father and the magnificent peaks that had once mesmerized him.   Very few dared to climb the peaks of the Spine of Kallex as their ragged peaks and sharp drops were dangerous to even experienced climbers. Traenas saw that as a challenge, hoping to use his love for the mountains and his knowledge of geography to create a lasting impact. For five years after he returned to the Elven Forest, he practiced his mountaineer on the smaller mountains on the edges of the Spine. When he was ready, he would attempt the tallest peaks that had been named the Scales of Kallex. 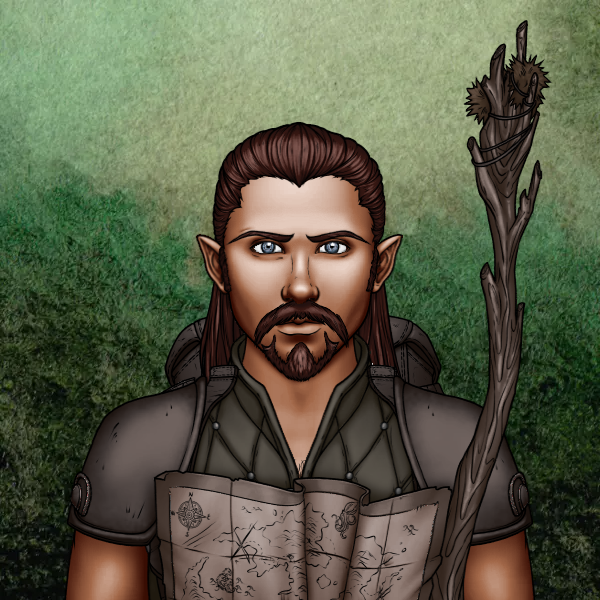 The Spikes of Kallex are a group of peaks in the Spine of Kallex that reach to elevations over 15,000 feet. These peaks were seen as unclimbable due to their heights and the dangers of the sheer drops and dangerous areas near their bases. Within the last two decades, this thought has changed as Traenas Elrel began his climbs of the dangerous peaks.   Traenas was the first to successfully climb all of the Spikes of Kallex and map the areas surrounding the peaks. For centuries, most of the Spine of Kallex was left unmapped and navigation of the various game and other trails relied on the hereditary knowledge of the various Barbarian clans that called the mountains home. Traenas used his vantage point to create maps of elevations of the mountains from the vantage point of the Dragons, something that had been thought of as impossible.
Elven Kingdom