Former Gates of the Eldritch Horrors

A power beyond this world erased our existence, removed so many others from this world. What once was a thriving jungle is now nothing more than scorching sand that kills nearly everything it touches.
— A Minotaur on His Lost Homeland

Burning sands stretch for what seems an eternity, reaching from horizon to horizon with nothing to break up the nothingness of the expanse that greets the eye. Silence is deafening here, although the wind blew less than a mile away, the wind and the bird calls disappeared as the sands began to open up before you. Something about this place screams disaster, something about this place has an odd air of death.   What once were lush and vibrant landscapes full of bustling people, colorful fauna, and expansive foliage were reduced to mere nothingness in seconds, erased from the earth as if these places had never existed. Millennia of history and culture reduced to less than ash, obliterated in an event that would define Isekai as it is known in the present day. Few places were affected to the same extremes by the Eldritch War, but the Deadzones bear the scars of the Eldritch Beings that attempted to claim Isekai as their own.   The Deadzones are all that remains of the location where the Eldritch Horrors first entered into the world. Their power obliterated all that stood in their way as they entered into Isekai and attempted to undermine and destroy the world as it was known. The first to be erased was the Mystic Jungle and its villages of Minotaurs, followed soon by the once beautiful Island of Blessings. Entrances were created on the island of Eth and again in the (insert Notios location), allowing the creatures to roam freely from across the lands.

The geography of the Deadzones is very different from anywhere else in the world as the Deadzones are the only true deserts that exist within Isekai. These locations are defined by extremely hot temperatures, burning sands, and swathes of scorched earth that stretch for miles, seemingly from horizon to horizon.   Quick aerial measurements have noted that some patches of scorched earth could stretch for hundreds of square miles, often near the center of the Deadzone. These areas are where the Eldritch Beings entered the world, marring the surface with their otherworldly power. In instances where it was possible to measure the depth of the cracks in this area, measurements pointed to cracks that reached hundreds of feet downwards, some even permeating the upper reaches of Káto.   Depth measurements of a number of the sand dunes throughout the various Deadzones have corroborated this claim, showing hundreds of feet of sands piled in various areas and reaching parts of Káto, sometimes entering the tunnels and making areas of the upper tunnels unusable due to the nature of the burning sands.

Areas of sand are found throughout Isekai, but none exhibit the bright orange color and the extreme temperatures that are found in the sands of the Deadzones. These conditions have killed off all life in the area, often for at least a mile or two after the sand ends as well. Magical means are required for a person to enter a Deadzone and not suffer severe life-threatening injuries that have few remedies.   Magic academy researchers from both continents as well as many Avian Mapmakers have attempted to study and map the Deadzones but the phenomena of the burning sands makes this a nearly impossible task, even when flying hundreds of feet above 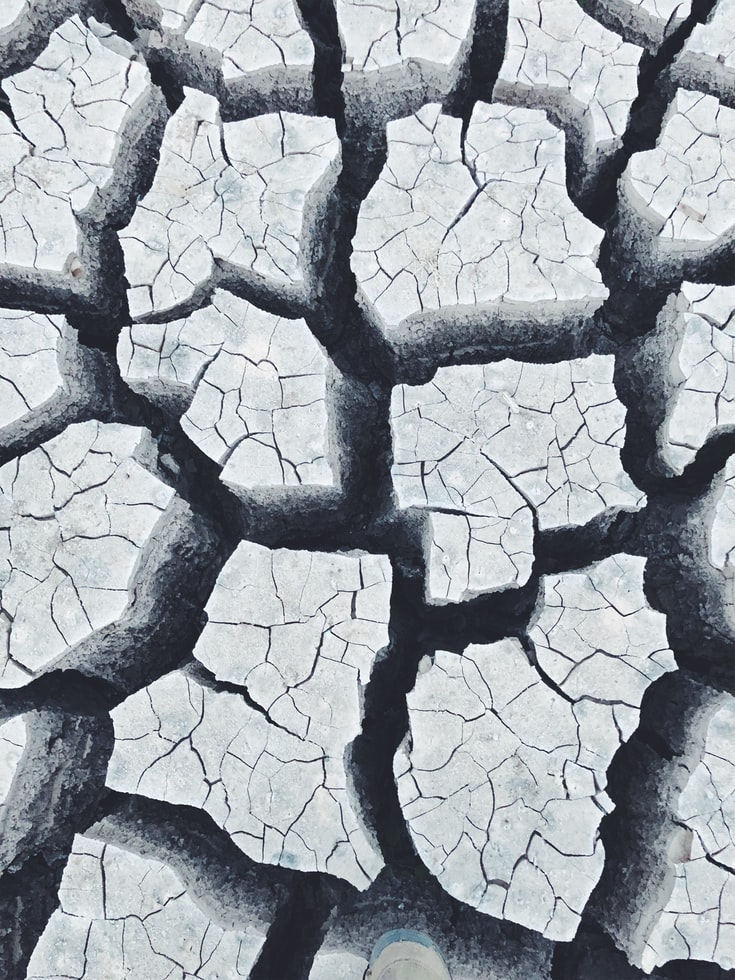 Scorched Earth by Joshua Brown on Unsplash
Deep cracks web across the ground throughout areas of the Deadzones. Here, the power of the Eldritch Beings reached deep into the earth, creating scars that no amount of time will ever heal.
the ground. It is believed that the power of the Eldritch Beings lingers in these areas, raising the temperature astronomically and the world is unable to heal such deep wounds.

The smallest of creatures can no longer survive here. Insects and birds do not fly over the scorched ground, rodents do not dare go near. Even the deadly creatures of Káto turn away from where the burning sands have crept into their homeland.
— Unknown

Deserts are often home to flora and fauna that thrive in harsh conditions and areas that lack large quantities of water. Even with proximity to water in many cases, the Deadzones lack any indication of life, including in the areas near their edges and in the air space above them. These areas are eerily quiet, lacking birdsong, the chatter of rodents, or the sound of any other living creatures. The deep cracks in the scorched earth and the burning sands were noted to have either swallowed or killed all who attempted to inhabit or cross the Deadzones in their earliest days, causing most creatures to instinctually shy away from these odd places.

The Eldritch War lasted one hundred years, but the Deadzones were created in relatively quick succession during that time. The first gate opened in the Mystic Jungle not long after a series of scouts were sent out from temporary entrances into Isekai. For many places and peoples, these scouts would be the beginning of the end.

7 Spring's Morning, 1 EA
- First Eldritch Being Appears   15 Spring's Morning, 1 EA
- First Gate Opens in Mystic Jungle   23 Spring's Morning, 1 EA
- Gate Opens on the Island of Blessings   10 Spring's Noon, 1 EA
- Gate Closes on the Island of Blessings   12 Spring's Noon, 1 EA
- Gates Open on Eth and in the Forest of Mytos
In the early days of 1 EA, Eldritch scouts were seen throughout the world, but were quickly dispatched by Clerics, Paladins, and other heroes of various realms. It was assumed that these were nothing more than fledglings that had slipped away from some spell caster, lesser demons with little danger associated with them. The people of Isekai quickly found out how wrong this assumption was.   On the morning of 15 Spring's Morning, a blast of energy radiated across Vóreios, announcing the entrance of the first waves of Eldritch Horrors.. Heroes and others assembled near the borders of the decimated Mystic Jungle and began repressing the hoards.   Within days, another gate opened on the Island of Blessings. While this gate shut relatively quickly, the damage was already done. Two more gates opened on Eth and in the Forest of Mytos, bringing greater hoards of Eldritch Beings that decimated great areas across the world.
The Eldritch War stretched on and the gates remained opened. By 10 EA, the peoples of the world began referring to the areas where these gates appeared as "Deadzones", as nothing would grow or thrive in such conditions. Once the war was over and the gates closed, only then did the peoples of the world understand the full extent of damage in the areas that they had dubbed the Deadzones. 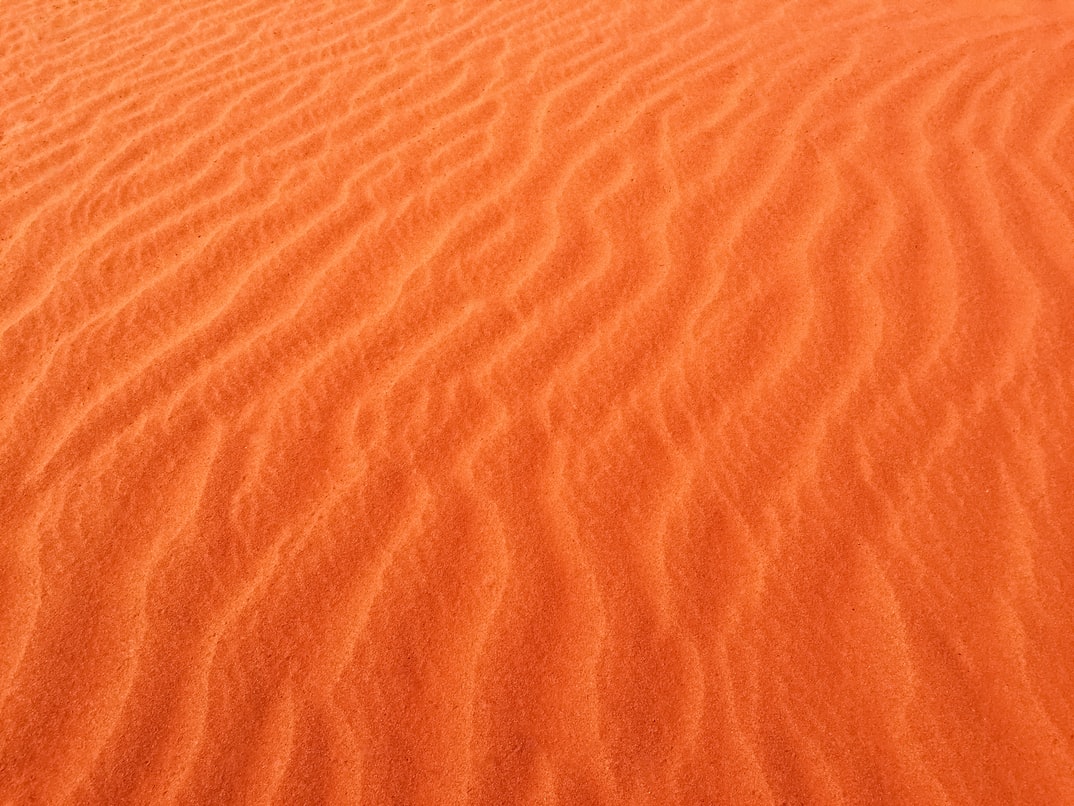 Orange Sand by Jeremy Bezanger on Unsplash
The Deadzones are known for their orange-colored sand and its burning, reaching temperatures at which no creature can survive easily. This causes few to even attempt to cross a short distance of these areas, choosing to circumvent it if at all possible.
Related Event
Eldritch War
Decimated Species
Minotaurs
Included Organizations

Many instances of the Deadzones were once vibrant locations with flourishing people and vibrant ecosystems of flora and fauna. These places were nearly always entirely erased by the entrances of the Eldritch Horrors, but some locations were more favorable and bore the brunt of that choice.

Once home to the mighty Minotaurs, the vibrant jungle full of thousands of ruins and precious religious temples was destroyed during the Eldritch War. This area became the first of many new Deadzones.

Greenery covered the island, making it a safe haven for Dragonkin and others that searched for solitude. The same island became one of many Deadzones during the beginning of the Eldritch War.

Home to the Lesser Celestials, the Island of Blessing slowly became nothing more than a sheet of ice south of Nótios. The Eldritch War decimated little there, even with a Deadzone created on the island.

The largest forest in Isekai, the Forest of Mytos spans nearly all of the Southern Continent, creating a large rainforest where a variety of Animal Kingdom races thrive.

I wouldn't want to get lost in a Deadzone!

Check out the worlds of Solis Empire, Magic Earth, Ithir and Vyraj
Check out my Summer Camp progress page
Powered by World Anvil