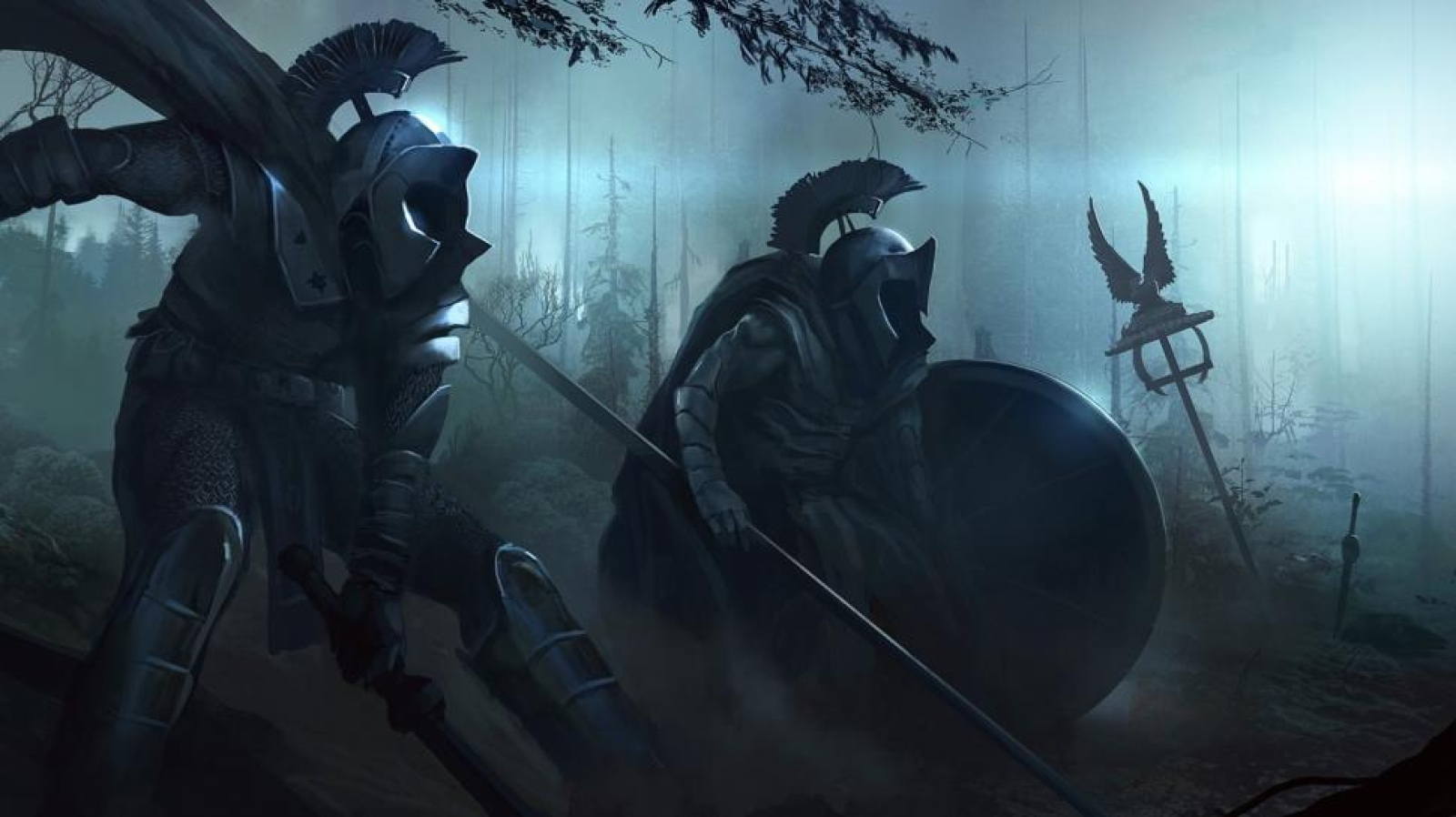 "When the seven gods of Ozlith ventured into the domain of war, it was the widow who chose to focus on the cost, while her fellow gods latched onto things like joy, skill, and coordination. A goddess of death and rebirth, The Widow found herself at home on the battlefield. She was determined to do what the others would not. To join her legion, you will pay a price. " ~Ozlith: The Birth of an Empire and the Seven Legions

The Widow's Legion was one of the Seven Centurion Legions of Ozlith and The Widow demands a price to join. She gathered her priestesses and taught them a rite of her creation. She told them to go forth and gather only the widowers of Ozlith, the men who have lost a part of themselves. When they did they performed the rite and the centurion who emerged was a changed man.

Due to some arcane power, the heart of the man is removed. The nominubus is removed, grown dirty over time, as the one woman capable of removing it was dead. It would be flipped and painted over with a black ichor. The festering wound would never heal and a miasma of death radiates from the man as he enters his new unlife.

A gladius and black armor were all the widowers needed in battle, but they fought without a shield. In their off hand they often carried a second gladius coated in the venom of the widow herself. Death is certain and swift, if you can even get that close. Their armor was painted black and the widowers are one of the few legions who implemented magic into their training.

They learned the art of death, forcing their fallen enemies to rise and fight their countrymen. The widowers were always silent, methodical and the miasma made them as much a liability as an asset. Widowers were only used in dire circumstances.

They showed up when a battle was lost. They were an omen of defeat and failure and were shunned from society.

Not much is known about them, as they kept to themselves and guarded their secrets. Those who wanted to join must be chosen by a priestess and make a pilgrimage to the long-forgotten island of Ozlith, where the empire originated and where the widow was said to live.

While very little is known about tactics and ranking, historical texts from Mhirriah go into enormous detail on the speculation of training and initiating a new prospect. When a widower is found, the priestess observes him and waits until his loss clouds his reason then approaches him and tells him of his pilgrimage.

Many entries state that when he arrives, the same priestess will transform into a spitting image of the mans wife and the rite, whatever it may be, begins.The widowers rarely fought face to face. Usually the only one's who can get close are those who use the arcane arts.

This is due to the miasma that flows from them. Inhaling the gas is to meet an unpleasant death. The legion was often referred to as "The Last Resort."

They were called when a battle was lost, but needed to be won. The generals of the armies would sound the black horn, a hollowed out fang of a giant eldritch spider. This causes the miasma around them to move and grow and they follow it to the fields of battle to purge it of enemies.

I sat on the hill with my mom watching them fight down below. My father was always on the front line. He fought like the centurions themselves, to be honest, but tides turn. They always do eventually. At some point, even the armies combined with the great centurion legions of Ozlith won't be enough. That is when the black horn sounds. It was a lovely sound, no wait... It was sad, a heart-wrenching sound. I can't seem to describe it... strange... a moment ago I could recall it perfectly. That's unsettling.
No matter. The horn sounds and I've never seen a man of war so scared. A cloud appears, not the dust kicked up from the battle below. It was black...thick like water creeping slowly. You can see them, or at least their silhouette. Black figures in a black mist.

I have never seen a battle that ended with soldiers from both sides running for their lives. Some of them were crying. My mother took me by the arm just as the mist began to overtake the enemy forces...and some of ours too. They held their breath, but they made a grave mistake. When the widowers take the field you don't run. You will likely die or you may not but it's dreadfully hard to hold a lung full of air with heart pounding and adrenaline pumping. You just ran half a mile and now your going to die tired.

I wish I could tell you all what that mist did but based on the screams and...oh...those horrible sounds....I honestly dont want to know.

The Seven Centurion Legions of Ozlith

Oooh.. Interesting! :D   The magic part is interesting. How common is it to use magic in war? Has it changed from ancient times when these legions were more active?   Is this another legion that is no longer part of the world or are they contemporary? How do they fit into the world now, if they are gone from it? Are there legends, myth and theater plays that feature them? Are there any successor legions who mimick this one, but without its unique magical elements?   Keep on WorldEmbering! :D

Thanks so much for commenting. I'm sure i owe several critiques which i will get too. I keep forgetting lol.   Magic is commonly used it war and has been since its discovery but this more than magic, its the power of an outsider, a god from, well, somewhere else. Ozlith is inspired by an idea of making a pseudo roman and Greek society that is a cosmic horror itself. The real weirdness of the widows legion is they have their goddess with them and thay power is what radiates from them. A god influencing a battle is unheard of, but outsiders are not bound by cosmic rules.   For the most part none of the legions have an active role in the present. They are believed to long dead. Not enough of this legion is known for plays or mimicking sadly. The quotes are from a character my players meet when the legions become particularly important in journeys of the expedition. They meet Mirrah who is kind of a messiah. Ozlith is a lost land that the people of Mhirriah want back and she has promised it.   Maybe a little too much info but i think that covers your questions lol thanks again for the comment and I'll return your critique soon :)

A cosmic horror take on the Hellenic/Roman era sounds really fascinating! I look forward to seeing what else comes out of it!   Do you think magic will have a soft or a hard system to it? :D

Its actually a weird combination of both. Lore wise magic has a lot of fluff, especially enchantment which gets complicated and often times is more a method of showing off than efficiency due to how easy it can be to make a mistake. The sanguine legion were the first to use blood magic which is much softer than enchantment. So i guess it depends on the genre of magic you use and what kind of practitioner you are. More a matter of preference lol Bards cheat the magic mages use through art for example

Well, that's kind of rough for them. They always show up and the hometeam loses. Now, is it that the Widow's Legion has bad luck? Or cursed? Or is this a matter of bad timing? What's the purpose of their magic?   Given there bad omen, how do they fit in with the world?

I forgot to add this last night and will add it now. They were a bad omen cause they take the field to ensure victory even at the cost of their own me. They are the last resort for critical battles ozlith couldn't afford to lose. Think like a living nuclear bomb. They are not bad luck but being around them is dangerous due to the most. They can't control it because technically it isn't their magic but the power of their goddess spilling from them. Necromancy would be magic they know and use. The purpose of their mist and magic is to purge the field of battle. Even if they are the only one's left standing, its still a victory for ozlith.

They were kept away from the battle as a reserve once the horn sounds it agitated the mist causing it to move and grow and they move with it.

Sorry for the multiple replies i didn't answer the last question. Truth is they didn't fit in, even in their nation. Being a widower in ozlith is considered the worst position as the only person able to reveal your very name to the world was either your mother or if you were married it passes to your wife. Ozlith is matriarchal society and men could only share their names to those they married to if they married a woman.

I love your legions! This one was very chilling to read. How do they get the "festering wound"? Is the miasma just bad smell or does it spread disease like they thought back in the day? :D

Thank you! The miasma smells like decay and is visual. It is an essence of death that spills from the wound. As far how they get the wound its from when their heart is removed. During the rites the empty space begins to pour the mist

I dont picture it bloody or grey. More fairy tale. Nasty gruesome stuff isn't really what the widow is about lol but that I you for your kind words and the like :)

Very interesting article. I love the idea of the legion, and am hungry for more details. The layout is well done and I like the artwork. My only critique would be to proofread and refine your formatting slightly. This is not meant as a slight, merely a means of continuing to improve on what I see as a great article. Well done, and keep up the good work.

Thanks so much for the like and comment. I appreciate your kind words so much. I will be focusing on formatting and proofreading after December. If you really want more the links in the sidebar feature the other six Legions as well as the full story of their nation in the legions themselves. By no means do I expect you to do so but hey it's there lol