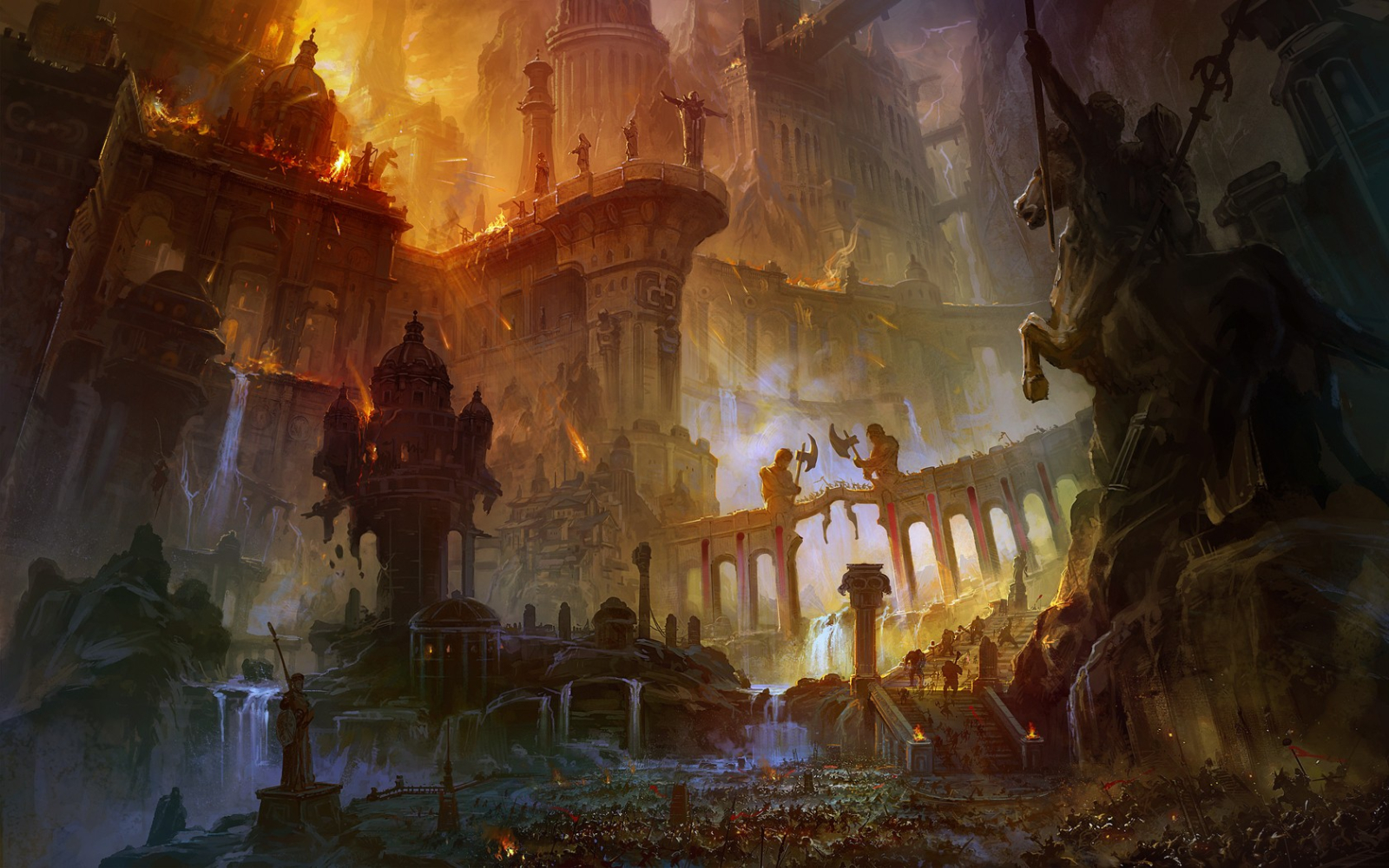 Ozlith is one of the worlds greatest mysteries. It's empire pushed from the southern border of mhirriah to well beyond into territory that has ever been explored. The land of ozlith itself, where the empire originated, is a long forgotten region said to be as far south as one could travel. Ozlith was at its peak when it fell. An invasion of demonic entities that ravaged the land over the millennia to turn it into the infernum, slipped through into the physical world. The mhirrians themselves were the refugees of ozlith who escaped due to the efforts of the last empress turned goddess Mhirriah, for whom the nation is named, along with her entourage and the pantheon of gods whom the ozolith worshiped. The Epicenter i of the demonic incursion is the city of xiulba, which was built to be the new capital of the empire due to its central location within its borders. The previous capital of Salimiscus was in ozlith and was too far to govern the outer territories effectively. Expedition demeter journeyed into the infernum and unraveled the mysteries of ozlith.

Ancestors of the 11 tribes of mhirriah

When referring to ozlith there are two terms of the note. The republic and the empire. It is widely known that ozlith switch from a republic to an empire in the middle years of the long war. The Republic and the empire were radically different in culture. The republic was a peaceful and forward thinking state. Elected officials would meet and decide laws similar in many ways to the Estallian major and minor nobility who based their branch of government on the ozlith republic. In this time ozlith did not have any standing army, relying more on local militia and mercenaries to settle military disputes. It wasn't until the long war began that they formed an empire. The first emperor, who so far remains unnamed, absorbed other cultures into the empire. These cultures were given many freedoms and liberties as a part of the ozolithian empire which made most content. Rebellions were frequent but the centurion legions were more than capable of stuffing them before they took off. Laws we're established by local governors who were known members of the local cultures.

Ozlith had always been wealthy. This allowed them to establish trade and in the time of the empire, it allowed for well-coordinated efforts to build roads to and from territories. Their weaponry is regarded as the best in the world and even after all this time are still usable and effective to this day.

Ozlith featured many elements of infrastructure but most of these things are unknown as it has been so long. The ozolithian markers and ozolithian nold are examples.

The seven centurian legions were the major asset of ozolith along with an empire that ran like a well-oiled machine.

The seven legions, and the inner circle are the only currently known organizations of ozolith though many likely existed.

Apart from the basic history of the vignette above which many refused to believe, ozolith's history is fairly unknown. Of the texts currently known, few details anything that doesn't concern mhirriah's reign or the later years of the long war. This is partly due to loss of various texts to the ages and the fact that historians were not plentiful in ozolith during the time of the empire. This time placed most people in the military. Another reason is the church of Mhirriah itself who refuse to enter the ozolithian markers in Mhirriah and forbid others to do so as well. Many believe information resides in these markers.

Ozlith featured elaborate designs carved in stone. A heavy use of pillars and arches along with open spaces, sometimes even outdoors as in ozlith proper the weather was usually agreeable and the temperature brisk.as the Republic expanded its borders became an empire, ozilithian mold was common and widely used for its many properties. It was shaped into similar architectural designs but angles were rare as they had to make after the structure was built since the core of the mold is rounded on the edges. Statues and engravings often decorate the spaces and windows were often left out of designs. This along with the use of ozlith a mold was a military decision. The mold was nutrition and paired with almost anything allowing those caught in a siege to wait it out for long periods of the time. The cored provided a dense wall for protection and lack of windows allowed for fewer means of entry and less structural weaknesses. Few have lived to enter these buildings and get out alive so interior spaces are a mystery.

Due to its size, the empire featured just about all forms of geography. The original land of ozolith was said to be a rocky and fertile place, with forests, hills, and plains. The resources found were just as plentiful.
Alternative Name(s)
Ozlith
Type
National Territory
Population
Unknown
Inhabitant Demonym
Ozolithian

A key componant in marriage traditions practiced in Ozlith, this piece of cloth covered a tattoo on a mans chest. This tattoo is his name, and it is forbidden to reveal to anyone.

A substance that enhances, produces and even gives life to flame that originated in Ozlith

Monoliths that litter the land of Mhirriah and persist even well into The Infernum. Legends tell of select markers the warrior queen built herself that lead back to Ozlith.

An arcane shortcut to grant one arcane power, or hinder an enemy with the sounds of sizzling flesh.

A curious substance that comes from mold colonies. It is most often used in the creation of weapons sharper and more durable than steel ever could be.

The language spoken by the people of Ozlith