The first thing that hit me was the smell - a putrid mix of rot and death. I had been expecting a body - the neighbours claimed they had not seen the man for days - but there was nothing in the hovel except a pile of rags in the corner.   I stepped closer to investigate and stopped dead. It was not a pile of rags at all, but a puddle of flesh. A scream strangled in my throat.   The puddle had a face.
— Anonymous King's Rock Guard

The Red Death - often called Bloodcap-Induced Disintegration by scholars - is a rare condition sometimes caused by the ingestion of an extract derived from the bloodcap mushroom. It is not clear what triggers this disorder, as one person could drink the extract a hundred times and be fine, whilst another could try it once and be dead within the month. 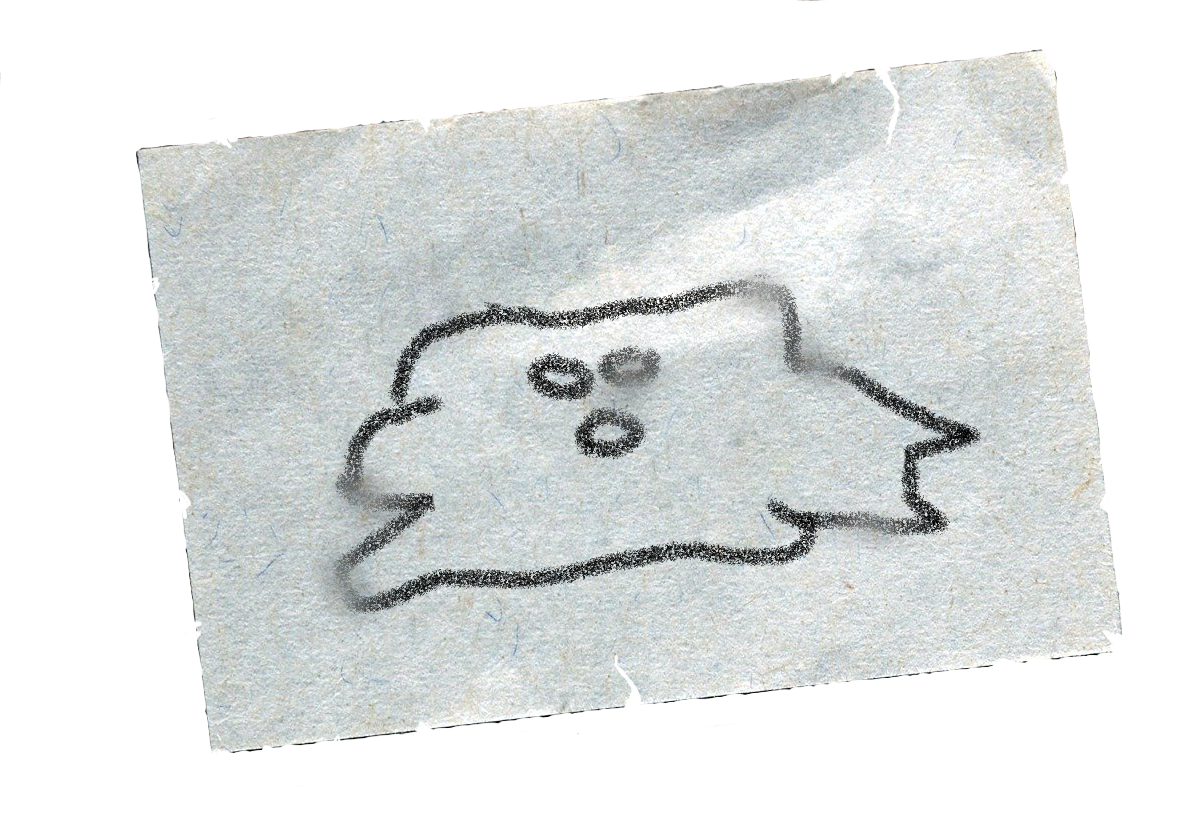 by BRRT, edited by Emily Vair-Turnbull
An artistic rendition of a victim by a drunk guard after a particularly gruelling shift.

The first sign that the Red Death has taken hold is chronic fatigue, which appears within the first couple of days after ingesting the extract. The sufferer will find everyday tasks laborious and that sleep no longer allows them to feel rested.   After about a week, the sufferer begins to feel pain spreading throughout their body. This is the beginning of osteomalacia, or bone softening, in simpler terms. Walking - followed within days by standing - becomes impossible as the bones are no longer strong enough to hold up the body. After around two weeks, the pain becomes intense and constant as the bones begin to disintegrate inside the body. 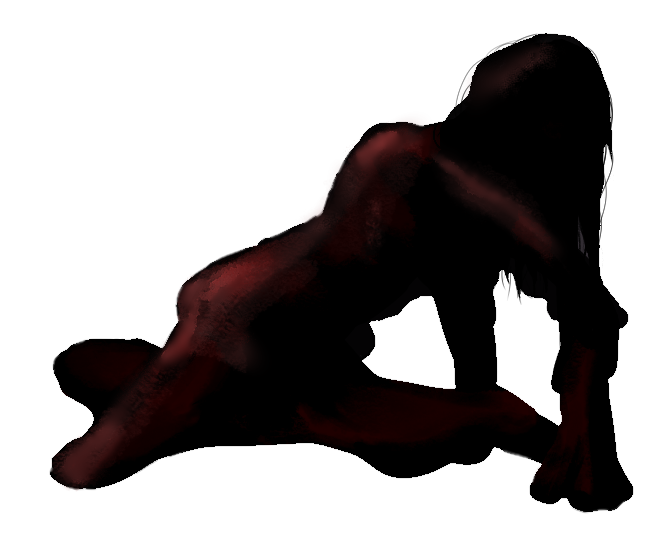 With care, the sufferer can live a month or so after the onset of pain, though most are of the opinion it is kinder to let the afflicted die quickly. As the bones disintegrate, the body becomes formless and organs shift from their proper places. Often, the actual cause of death is suffocation, as the lungs collapse without the protection and structure of the ribcage.

The Red Death is fatal in all cases. Once the fatigue sets in, there is nothing anyone can do.   Death occurs between two to five weeks from onset of symptoms. Attempts to prolong life beyond this point have proved unsuccessful.

As the bloodcap mushroom matures, its gills begin to liquefy as a method to better spread its spores. This causes the underside of the mushroom to drip with what looks disturbingly like blood.   If ingested, this extract causes feelings of intense euphoria and mild hallucinations. On rare occasions, however, it can cause the onset of the Red Death. Unfortunately, it is extremely addictive and each use is a gamble with death.   For these reasons, bloodcap extract is highly illegal in most countries.

It is generally accepted by Caian scholars that, on rare occasions, spores contained in the extract penetrate the jawbone through the teeth. Once inside the bone, the fungal root system quickly spreads throughout the skeleton, feeding on the minerals in the bone and destroying the bone marrow. 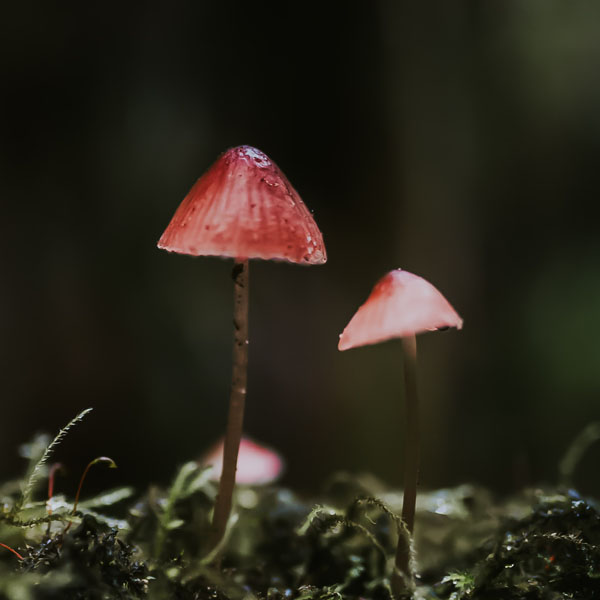 by Cole Keister
It is not known why being inside the human body speeds up the bloodcap's growth cycle. Scholars generally believe that the presence of certain minerals or chemicals in different concentrations to its natural environment contribute to this. 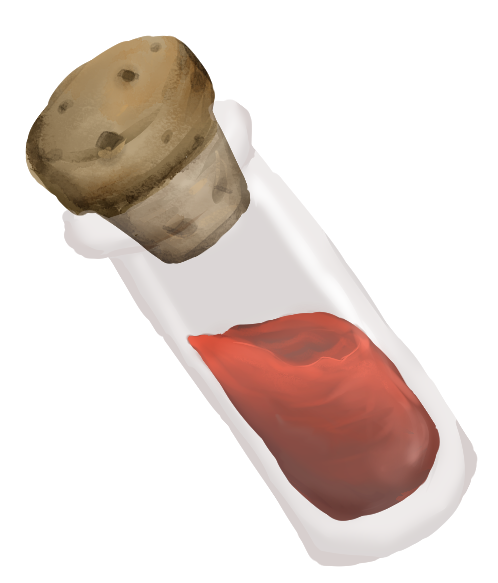 Amongst the general public, the Red Death is often believed to be the result of a curse or some maleficence. Though the link with bloodcap extract is widespread knowledge, the fact that it is a rare side effect leads most common people to believe that there has to be some foulplay involved as well. In Caillah, for example, the Red Death is believed to be a form of divine punishment.   On Sekaal, one of the small islands that make up The Cluster, bloodcap extract and the Red Death are integral to the worship of the god, Kizsir. On Sekaal, this condition is known as Kizsir's Embrace, and is considered a blessing. Two people on the island are chosen each year for the honour of drinking bloodcap extract daily. Being Embraced during this year is a sign that the person has been chosen to ascend to Kizsir's side. This is a cause for celebration and the person will be kept on public display until they succumb to the Embrace. Making it to the end of the year without being Embraced is a source of great shame for an individual, and they will be shunned by their people for it. They are cared for throughout their subsequent violent withdrawal from the drug, before being sent to live in seclusion with others like them.

Answering: "Describe a condition in your world caused by a drug or medicine."
Visit Serukis's Competition Page Check all other answers to this prompt Competition Homepage

This article was originally written as part of Summer Camp 2020.   Prompt: Describe a condition in your world caused by a drug or medicine.

I love it Emy, It roughly reminds me of ergotism, but nastier.

Muuuuuuuuushrooms! :D   Question: is it ever used by assassins? Can you slip it into someone's meal, or into a wound through a blade? Is there a market for the extract, with secretive guilds controlling the trade, etc? Is it common or rare? :D   Great stuff - can't wait to see what else you do for Summer Camp!

Thank you, Q! I'm going to have to write a whole article on bloodcap extract itself to answer those particular questions! Great to think about though! :D

"The puddle had a face." :o This is amazing and absolutely terrifying at the same time.

This is horrifying but sooo good!

Thanks so much, Laura! :D

Mushroom article! And what a mushroom XD   I really love this :D death by slowly melting into a puddle... absolutely gruesome! And I love how you've explain how that work, and all those crazy people still continuing to drink the extract :p

Oh wow! I LOVE this article! Again your CSS looks amazing, the page is amazingly well laid-out, the content is gripping and keeps you engaged, the art blends into the page well and give juuuust enough context besides the text... expert.   You keep smashing these out of the park!

Aww, thank you so much! That means a lot! :D

Great article Emy, this is one nasty condition...I love it :D   It also kinda reminds me of how "Baculoviridae" tend to liquify their insect hosts at the end of their life cycle.

Thank you! I think that's my favourite picture ever. XD

The idea to make it gruesome and illegal in one place and beautiful and blesseth in another is beautiful. The Embrace leaves me in awe but makes my insides turn when I empathize with the *chosen* couple.   I wonder what mushroom you will describe this year. :D

Yes, I love the idea that different people will have different views of the same thing.   Hopefully at least one mushroom! :D   Thank you! <3