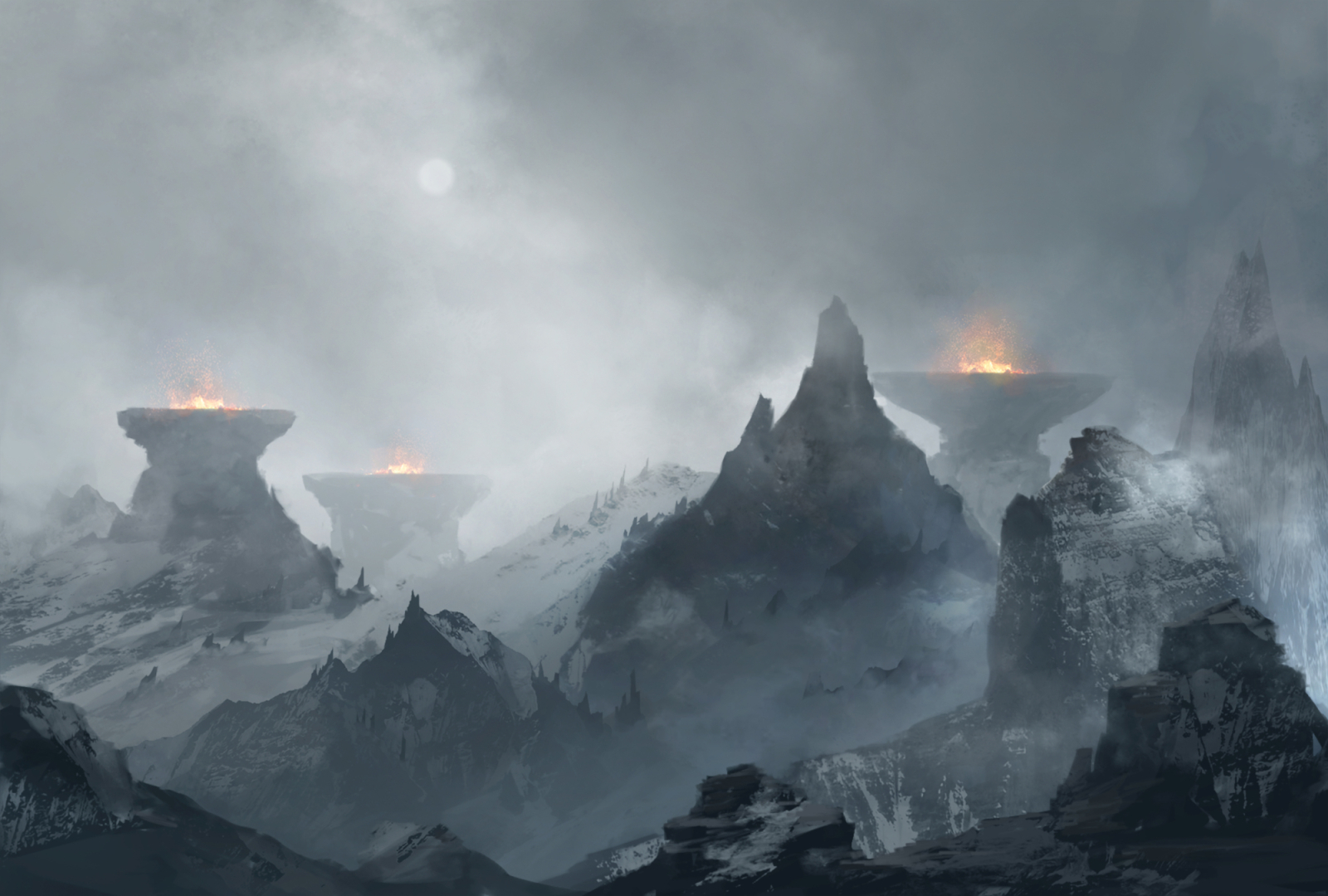 The arrival into the region of Dar'ru was marked with celebration, something that other Adventines did not have the luxury of. We arrived in the tamed southern parts, where the foothills began to break into jagged icy peaks. I did not see the city though, apparently I never was supposed to. "No city on the surface would survive," they told me. Only after my adventures would I understand why.

The entrance was a tunnel wide enough to house a passenger plane nestled on a the coast of the massive lake. The mist cast from the waves froze on my cheeks, making the tunnel all the more inviting.

The entire way down into the city was festooned with crafts, both synthetic and natural. Grand sculptures and dioramas of ice, glowing fungal arrangements that complimented the synthetic lighting.

The frozen north of the Jhoutai planet, this landscape is dominated by sharp jagged peaks ground to a point by wind and storms. At the lower points, massive glaciers carve the landscape.

Beneath the ice lies a very large subnivean zone where many unique lifeforms have evolved to survive in the tumultuous environment. Most glaciers flow into the frigid sea where they form the largest freshwater body on the planet.

Dar’ru also has the Wall of Razors, which is a series of basalt and obsidian cliff faces that form a landbridge between Dar’ru and Tel-Nege.

Jhoutai is on a cooling trend, and lands that were once safe for Coral growth are now hostile to it. Ringing the north and south equators are the old coral borders, which now crumble and collapse under the weight of snow.

Though the coral beneath the ice is dead, its vacant corralums still allow for tidal force to push gale-force thermal fronts northwards, sometimes resulting in flash floods and windstorms for those living underground.

Slush Floods
Though the coral spores don't take to the snow, they still often get caught up in its path and come down with it, leaving it traced with salts and other particulates that create massive pools of slush that, to the unsuspecting eye, just look like fresh powder.
Hypothermic Burst

Wind bursts come screaming down from the mountains, carrying such frigid winds that those at higher altitudes may find themselves suffering frostbite within moments of exposure.

Glacial Lake Basin East
Glacial Lake Ice Shelf West
The Subnivean
Dar'ru's underworld. As Jhoutai continues the millenia-long march into a global cooling trend, ice spreads outwards from the poles and out over ancient coral, killing it. Though the coral is dead, its corallums remain, a refuge for life beneath the ice.
Thunderhead Glaciers

Named for the frequent, earth-shaking rumbles emanating up from the depths, where glacial cavitation and coral collapse weaken the earth underfoot and push the glacial ice down into the Jerunthar.

The Steps to God
The Slush Flat

Fed by the waters of the thunderhead glaciers, and bordered along its southern edge by Osahn's Jaw, this artic lake is often hidden by 10-20 feet of slush covered in fresh powder. It's hard to tell what has hardened to ice, and what will suck you down like quickstand if you step onto it.

An unwitting Sazashi learns that Zweeg Worms may hunt in the ice, but they nest in caves.

This predator burrows through slush, navigating by sensitive dorsal bristles and protected against the cold by rubbery flesh and blubbery fat. Their body grows up to 13 meters in length, though is rarely seen in full. They circle prey to force them to sink into the slush, then attack them with biting or constriction before quickly consuming them for their precious nutrients and body heat.

Gravedigger Mole Worms
While much smaller than the zweeg (the average mole worm is between the size of a finger and an arm), Mole Worms are nonetheless a nuisance which invade farms and cause deadfalls within the snow.
Polar Sazakraht
Stocky, lumbering, and ornery, the Dar'ru Sazakraht are hearty persuit and ambush predators.

Watchtowers and towns built into hives of meta-sculpted stone. These plinths hum with the slow cyclone of meta-flame swirling at their core and rising from their tops. Should one see another's fire go out, it is cause for alarm, and aid. Many of these contain a sepulchre from the Sepulchre Procession.

Named for its southern curve and high, toothy peaks, Osahn's Jaw is an ancient, crumbling dam constructed during the reign of the Vadakendanic Procession as a way to prevent Dar'ru's subnivean slush floods from filling the bay below.

Hierophant Palace
Submerged deep below slush lake, Hierophant palace is a flooded Old Home sunken by the Valuser'ran supremacy during the Sazashi Revolution.

I love the idea of a freshwater sea. Sounds cold, though, being fed by glacier melt!