Trollkin were once the vile and ravenous Trolls, driven to madness by regenerative properties found in their blood. Now, thanks to a widespread practice of blood magic and shamanism, Trollkin have found a way to free themselves from the painful curse of regeneration. With the threat of madness broken, Trollkin stand ready to start a new life and prove they are more than their painful past.
Faced with a legacy of fear, Trollkin are seldom welcome among the civilized races and looked upon with a furrowed brow. As a result, most Trollkin live in isolated tribes and subsist on hunting or raiding for survival. Some have learned to thrive in civilization, but even within a cities walls, Trollkin tend to stick together in their own neighborhoods. Their skillsets fit in well with the local thieves or mercenary guilds and many Trollkin gravitate to disreputable work.   Nevertheless, a Trollkin at your side means a steadfastly loyal ally who isn’t afraid to break a few arms when the need arises.

The infamous regenerative abilities of Trolls are well known across Erenel. Slice a troll’s flesh or dismember a limb and watch as the Troll rapidly heals through the wound with only acid or fire slowing the regeneration properties. However, each time a Troll regenerates, they feel excruciating pain that slowly cripples their mind. This pain over time drives the Troll to inevitable madness as long as a Troll bleed’s green.   A Troll’s green viscous blood is also highly susceptible to mutations that lead to both physical and behavioral changes over time, sometimes within the same generation. For centuries, Trolls not yet succumbed to madness sought for a way to rid themselves and their clan from the curse.   Thanks to a recent surge of tethering blood magic, partially due to the Sanguis race, Troll’s discovered a way to remove the mutagen properties associated with regeneration, filtering their blood and leaving only faint traces of the curse. With each newborn Trollkin born after their parents undergo the filtering ritual, the regenerative evil is pushed farther away with hope it will eventually be eradicated.   Unfortunately, not all Trolls undergo the blood magic ritual. Many choose to walk the path their ancestors did, scared of the change that will befall them or unwilling to lose the short term power of regeneration.

Even though most Trollkin hunch forward with slender builds and broad shoulders, they still tower over many races in Erenel with an average height between six and seven feet. At first glance, they have both Elvish and Orcish characteristics with prominent lower canine teeth and long ears. However, Trollkin can grow much larger lower canines than their Orcish cousins, which can reach a foot in length.   Their long arms and quick reflexes allow Trollkin to be exceptional hunters, carving out a way of life in even the most remote places. With thick hides of green, blue or brown, Trollkin skin tones generally resemble their origin of birth. A Trollkin from the north will typically have a blue skin tone while a Trollkin from the Q’barran jungles could be dark green.   Most Trollkin wear tattoos to show tribal loyalty or to associate themselves with their ancestor's spirits. Great Trollkin warriors take this practice a step further and brand their flesh with acid or fire to show mastery over fear. The acid or fire burns represent overcoming the curse of regeneration and that they are no longer afraid of what was once considered their greatest weakness. 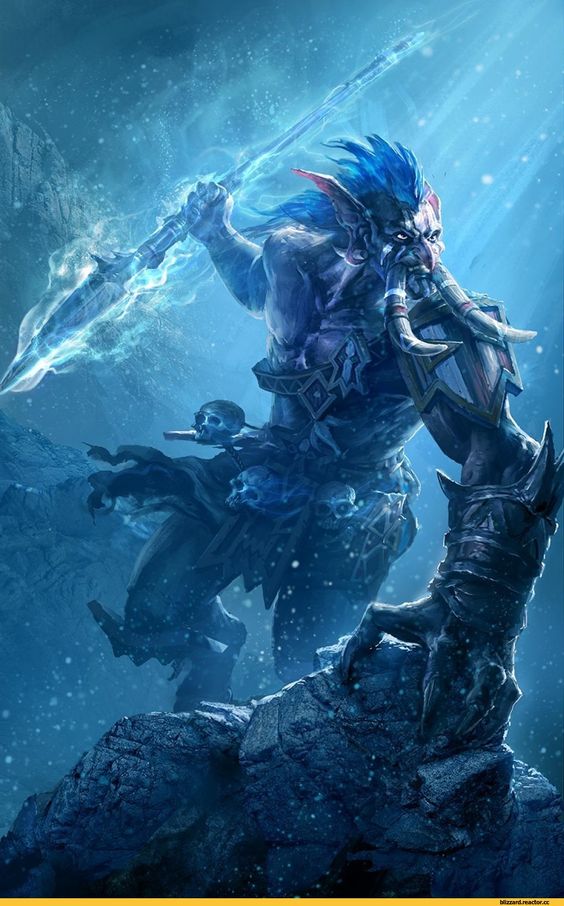 Available only for Gamingbrew Patrons. If you are a Patron the race will appear below. Support Erenel
Races

I love it. I'm working on my 'Troll' race now and having a hard time with it. This is an inspiring article.

I'm glad you like it! Looking forward to checking out your take on Trolls when it's finished.