The smog creeps above the horizon. A horrible fuligin beast clawing at a clear blue sky with ravenous hunger. Here is Glyphshire. The great gnashing of industry where men are fuel for the flames of commerce. From Glyphshire do all good things flow...   Glyphshire is the second most populated city in Victoria and the beating heart of the country's industrial force. In Glyphshire, coin will get you anywhere. Atop the hill from which Glyphshire was established, the Palatial District sits overseeing the rooftops and spires below. From here a thousand unseen dramas play out with guile (or not) and subtlety (or not). While the gardens and gated mansions give the appearance of refined elegance, safety is not guaranteed as the nobility are quick to anger as are their private guardsmen and pocketed mercenaries.   Below the Palatial District is the Vaulted Causeway. Here lives the true middle class of Glyphshire. People live out their daily lives free from the drama of the Palatial District and the Crucible below it (and very far from the Middens). Here, there is a semblance of law and order for rarely do the crime syndicates of the Crucible come to this district for prey. Among the vaunted institutions of Glyphshire, Bridgeford Academy stands tall and firm as one of the most respected schools in all of Goretz and the Four Seas.   Below the Causeway, the Crucible is where the true beating heart of Glyphshire is said to pulse. The grimy cobbles and fogged gas lamps give an eerie glow during the night as the smog drifts in from the Factory Ward. Here, crime syndicates wage covert war with one another for control of territory. The violence make even the police wary to involve themselves with affairs lest they be dragged into a greater conflict with more enemies than they can count. However, ingratiating oneself with one of these syndicates can come with great benefits. Access to contraband and rare materials as well as ease of access through controlled territory of the ward can be well worth a few thousand enemies. Just be sure to stay within your lane should you so choose to seek such counsel.   The Factory Ward stands at the edge of Glyphshire. From here, countless goods, weapons, and machines of war are produced and shipped to every corner of Victoria. These factories undergo new management often, with those from the Palatial District often sparring for control. While fortunes change with the toss of a coin, the gears of industry never cease.   Below the Factory Ward rests the Middens. Here the most wretched and depraved outcasts of society have been pushed to stew in the runoff of the ever running factories. The police refuse to come here as it is a madhouse of shanty abodes built in a crazed, haphazard manner. Rarely do outsiders return from the Middens. During the night, screams can be heard as the major syndicate of the Middens makes their patrol: The Sweepers. Said to speak a tongue only they know, the Sweepers are known to kidnap those who come out at night for unknown purposes. The other syndicates have all made attempts to control the Middens only for their efforts to be met with unmitigated disaster. Do not go here. 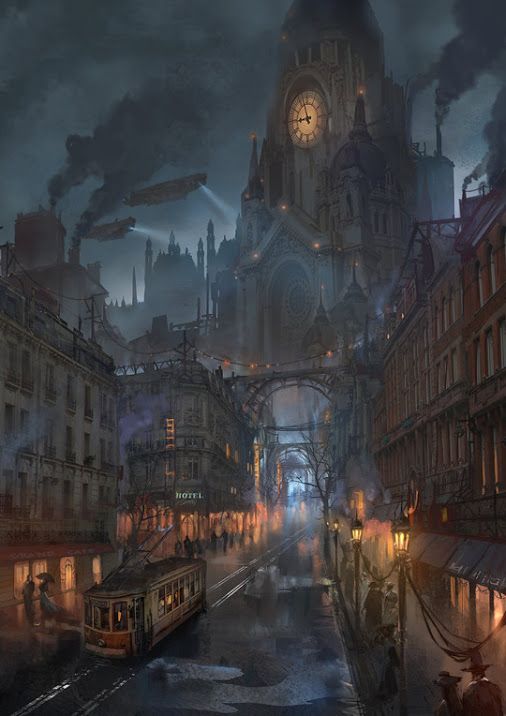