The Sindarin are a dwindling folk only 5000 or so remain on Harn from the multitudes who once followed their God, Seim, to this world. When their god, Siem, departed Harn, he summoned the Khuzdûl, the dwarves of Harn, to ward and watch over his chosen children, so beginning the epoch known to history as the Beginning of the Codominium co-dominion [/history]  , when Khuzdûl and Sindarin ruled over Harn jointly and in peace.   In time, the Sindarin and Khuzdûl welcomed the human peoples known today as the Jarin of Hârn, though in time they grew alarmed by the swift growth of the Jarin and their despoiling of the land. Yet before bloodshed could ensue, a second race of men, the Atani, invaded the islands. For a time, Jarin, Khuzdûl, and Sindarin alike warred against the invaders, but with the death of their King, the Sindarin retreated into the Shâva Forest, abandoning their dwarf and human allies. They have remained there, living in isolation with only a few thousand Jarin servants, ever since.   The Sindarin are divided into family clans, all of which are considered freemen by the standards of Harn's human kingdoms. Clan councils are often called to discuss internal matters, but most problems are resolved through negotiation – there is very little crime in Sindarin society. What little there is of it is judged by a legal system derived from that of the Khuzdûl, based on the concept of Vendetta. Society as a whole is governed by King Aranath and the Vulparen, his thirteen member advisory council.   The inhabitants of Evael are not taxed, and the economy exists on a basis of barter rather than currency exchange. The system is one based on trust, the exchange of favours and ties of kinship. In any human land such a system would fall apart immediately. It works for the Sindarin primarily because of their attitude to wealth; they rarely concern themselves with acquisition except for items they actually need although even the simplest tools will be works of art in and of themselves and also because such transactions are so few. Almost every Sindarin clanhold is entirely self sufficient save for a few imported minerals such as metals and gemstones. 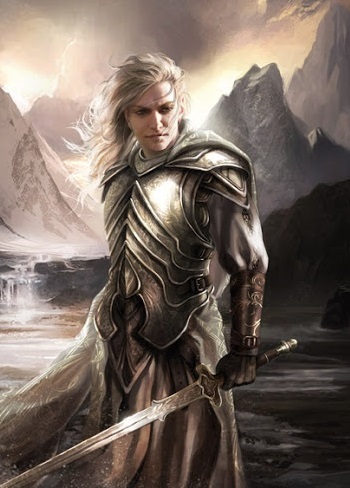