J'onn J'onzz is the Martian Manhunter, a law enforcement officer from Mars who became a police detective and superhero after becoming marooned on Earth. He is a founding member of the Justice League.

Centuries before the Modern Era on the planet Ma’aleca’andra, the Green Martians known as M'yrnn and Sha'sheen gave birth to twin sons. The bearing of twins was uncommon among the Martian culture, and as such, the first of the twins was named J'onn J'onzz, whose name means "Light to the Light." J'onn's brother, however, was born a mutant, bereft of a Martian's innate ability to communicate telepathically. He was named Ma'alefa'ak, whose name means "Darkness in the Heart."   As an adult, J'onn became a Manhunter (police officer) and married a Martian woman named M'yri'ah. The two established a modest home for themselves beneath the windswept Martian plains and gave birth to a daughter named K'hym.   Years passed, and J'onn's brother Ma'alefa'ak grew to despise everything about Martian culture. In an ambitious endeavor to commit full-scale genocide against his own people, he engineered a contagious virus known as H'ronmeer's Curse. The virus reacted to telepathic energy and carried from one Martian to the next whenever they elected to use their psionic powers. The plague responded to a Martian's innate fear of fire, causing them psychosomatic stress so intense, that their bodies and minds would literally burst into flame. J'onn desperately tried to keep his wife and daughter from using their mental gifts, but they were unable to do so, and thus ultimately contracted the virus. K'hym was the first to experience the symptoms, and M'yri'ah followed soon after. J'onn was anguished as he watched his family burning to death before his very eyes. The trauma of the event shattered his psyche, and nearly drove him mad.

On the planet Earth, a would-be scientist named Dr. Saul Erdel developed a transmitter machine based upon ancient Martian technology. Seeking to make contact with extraterrestrial life, he aimed his device towards the vicinity of Mars and activated it. The transmitter beam streaked across both space and time, striking the Martian Manhunter at a point in time several centuries before Erdel would even be born. The beam brought J'onn back to Erdel's natural time era, where he collapsed on the ground outside of the doctor's Colorado laboratory.   Erdel brought the distraught Martian inside and attempted to nurse him back to health. The anguish of J'onn's mental state created a psychic bond between the two, and Erdel became aware of the events that took place on Mars. In an effort to heal J'onn's mind, Erdel used the mental link to fabricate a new history for the Martian. He created a back-story inspired by the writings of famous science fiction novelists such as Ray Bradbury and Edgar Rice Burroughs. Eventually, J'onn's sanity was restored, and he was prepared to function in this strange, new world. Erdel put the idea into his head that he should become a great champion, and thus J'onn adopted the heroic guise of the Martian Manhunter.   When J'onn shapeshifted into a human-like form, Erdel was shocked and suffered a heart attack that killed him. As he was dying, Erdel asked J'onn for forgiveness for making him a prisoner of Earth .

Like all Martians, J'onn has a somewhat cold and stoic demeanor. He has very restricted emotional expressions. J'onn typically acts as the voice of reason in the Justice League and is one of the wisest leaders within the hero community, along with Batman and Superman.   Despite his cold exterior, J'onn is one of the kindest and most noble heroes operating on Earth. The Manhunter has demonstrated enormous willpower, as evidenced by his ability to retain his sanity after the death of his race. He has a subtle sense of humor and an affinity for the chocolate cookie sandwiches Chocos. The Martian Manhunter is considered by many to be the heart and soul of the Justice League.   He has spent decades living among humans and investigating the whole scope of human life. Although his primary human identity is John Jones of Denver, he has several aliases around the world that he uses. He even spent several months in the shape of a gorilla, living among them to learn about Earth. 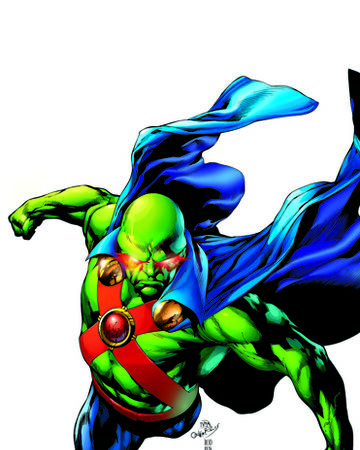