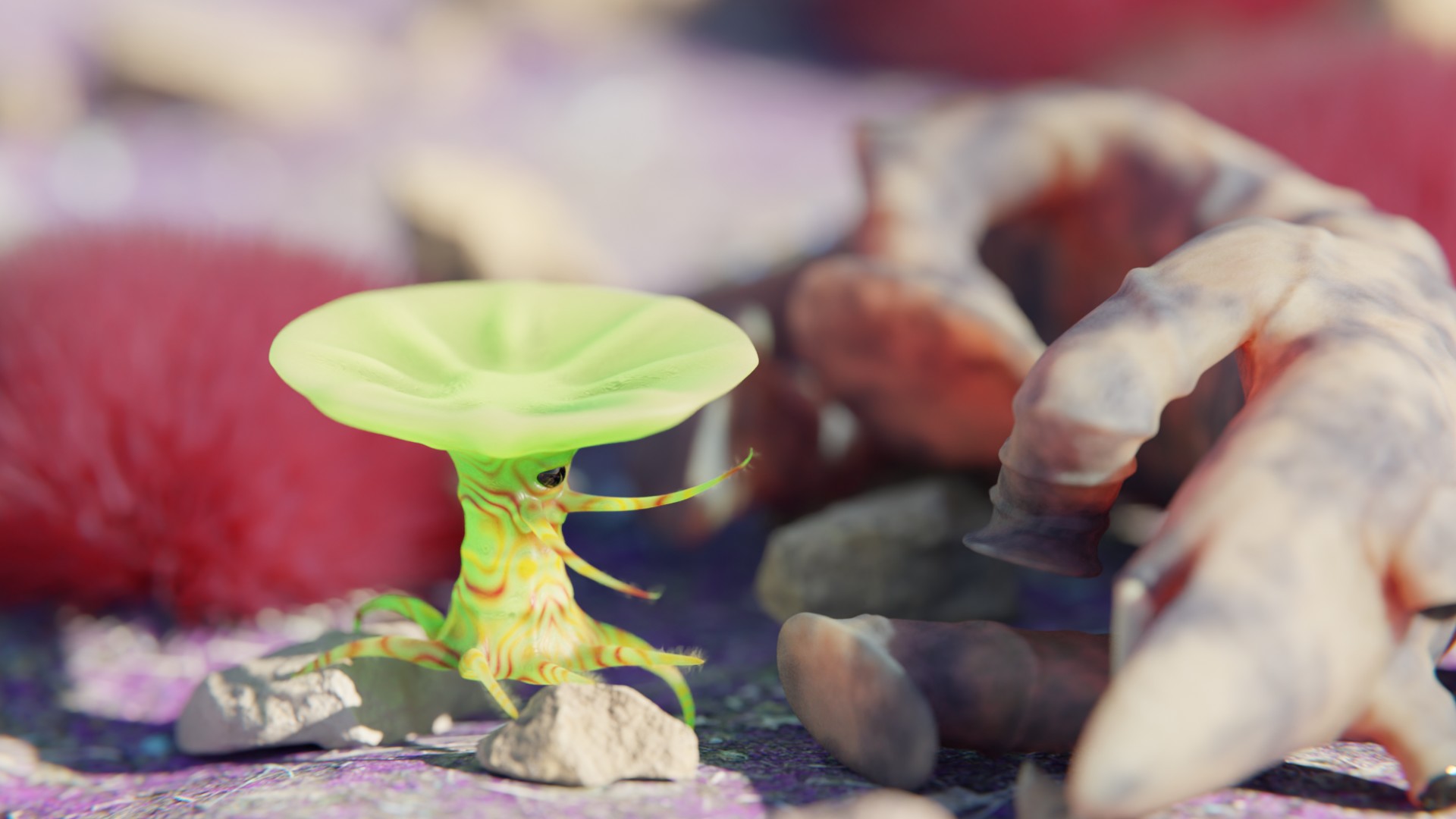 Landstars are one of the earliest phytozoans to venture onto land. They are slow moving, mildly poisonous scavengers that can slowly crawl across the ground in search of new carrion. Pictured here a landstar crawls towards a fresh springheel corpse around midday on Yama.

Landstars are morphologically rather conservative. They have a thickened round leaf that is used for photosynthesis, two tendrils used to sense chemicals in the air or water, 8 legs  and a single eye, much like their ancestors chloropseudopods, or the related umtrabella. They also have a gonopore where all their legs meet. A unique adaptation is that their dermal layers produce a layer of transparent keratin that helps protect them from trying. This layer is thickest on the trunk and the leaf, but must be shed periodically as it will become less optically clear and also restrict growth. The shedding is accomplished with the help of hydroquinone which the organism produces in its skin. This disolves the inner most layer of keratin allowing the clear protective layer to slough off in large patches, which are then usually eaten by the landstar. A result of this however is that landstars are mildly toxic and taste terrible to most predators. They advertise this with orange and red coloring on their trunk, tendrils and legs. In fact while their ancestor may have only produced hydroquinone around shed time, landstars now have small reservoirs of it and so they taste strongly of the chemical.
While the landstar may look top heavy, the trunk and leaf are actually hollow and mostly full of air, where as the base of the body is heavily muscled and contains both what passes for a brain, the gonads, etc. As a result even when toppled a landstar can right itself.

Landstars technically have no sexes, but do have 3 mating groups, A, B, and C. Any landstar may mate successfully with a member of any other mating group, and mating group is determined genetically, and is a matter of biochemistry, not gamete size. The gametes are relatively small and when landstars mate, which happens each spring, they will gather near puffball stands and pair up. Each landstar will release gametes near the base of the puffball, and they will hatch after only 2 local days into microscopic larvae capable of little more than wriggling and exuding digestive enzymes and acids. These larvae will spend the first 20 or so local days of their life feeding on the puffball, until they start to grow their legs. At this point they will wander away to find carrion and will be full grown at about 1 local year. While this is not helpful to the puffball, it generally causes little significant harm, leaving behind some bald patches on the bulb and some scar tissue, but little else.

When a landstar hatches it has only a few hundred cells and is microscopic. They eat copiously of the host puffball on which they hatch, and within 20 local days have reached a height of about 5 mm, from there they will grow to adult size over the course of a local year.

Landstars are primarily scavengers of xenometazoan carrion, and are well adapted to life on land, not needing to return to it to breathe, mate, or feed. As a result they can be found fairly far inland on Yama, although to mate they do need puffballs, which rely on salt water, so they are always within a few local days travel of some salty or brackish water around spring time. They can smell the salt, and tell with their eye that the spring is coming, and so after 3 seasons of wandering anywhere they please they will start to move towards the beaches and estuaries.

The landstar's primary feeding aparatus is its legs. When it finds a corpse it will settle onto it, gripping it with its legs. The legs will then exude digestive enzymes which will start to liquify the tissues of the carrion. These are then absorbed into the legs and enter the creatures open circulatory system, and are spread around by a series of pump like organs found in the layer between the skin and the open air filled core of the trunk. Additionally, oxygen and sugar is obtained from photosynthesis, meaning that landstars can survive off of surprisingly little and low quality carrion for quite a long time.

The single eye of landstars is not well developed, but still helps them navigate towards food. Their primary sense of the world comes through chemoreception on their legs and tendrils. Their tendrils are sensitive to smells carried in the air, while their legs are sensitive to chemicals they come in contact with. Essentially they smell with their tendrils and taste with their legs. Each of these appendages is covered in fine hairs which are actually fleshy and have concentrations of chemoreceptors.
EXTINCT
Genetic Ancestor(s)
Scientific Name
Terrastra yamanensis
Origin/Ancestry
Phytozoa
Lifespan
4 local years
Average Height
5 cm
Geographic Distribution