One of the original Eternal Sagas.

"The light will find us, even if it blinds us!" - Saint Wenik, during the Battle of Rose Rock, one of the bloodiest battles during the Year of the Rose

Each Eternal has its own qualifications for how their Clerics are chosen. However, a typical theme across most is that the Cleric is chosen at a young age, usually before puberty.

The Mad God chooses his faithful not according to reason and ritual, but rather, seemingly by chance. Since Talos fell from grace before the Temple even began, he has never held a spot within it and as such, there are no recognized Abbocys that worship Talos. However, sometimes special cults dedicated to Talos are revealed the nature of his madness and from it, a seemingly random but wild person is chosen to be that cult's Cleric. Because of the insanity of the Eternal, there is no single ritual that consecrates a Cleric and every one is different for every individual.

The All-Seer finds his Clerics based on their willingness to find the devil in the details. This being said, Clerics of Voden are consecrated by way of several tasks. One of which is allowing the pre-trained Cleric to discover their self exactly how to use their divine arcana. Accordingly, he allows them to understand the means by which their first arcana when they are ready to represent and advocate for the guardian of perfection and knowledge. The last trial of Voden is that the Cleric can attune to the artifact presented to them under 15 minutes. If the Cleric fails, they must wait a Season before they are able to try again. This trial represents not only their cunning but ability of their mind, body and spirit become one so as to focus on a single all encompassing task.

As Luna not only doubles as the Eternal of Moon and Gates but also the Eternal of Smithy, her Clerics are typically either chosen from travelers or craftsmen. In addition to this, as part of the Treaty of Years, only Clerics of Luna may be trained Equinox. In either case, they are taught by their respective Abbocy the means to smith their own weapons and armor. Their trials consist mostly of several metal working challenges, their final trial being that they be able to create a set of ornate scale armor that must be approved by the residing Saint, who then melts the metal of the armor down into a hammer that will go toward helping the Cleric in that Abbocy forge their own armor. This is to prove that not only are they skilled craftsmen but that they are willing to provide their greatest work to supplant the next in line.

As the Eternal of Sun, Sky and Sea, many of Clerics of Norlane come from sailing or fishing backgrounds. There are only two trials the chosen must pass to become a full Cleric. The first is that they successfully summon and receive the blessing of a Djinn. The second is that they must bring up a swan from when it is laid by its mother to when it has reached maturity and finds a mate among the other swans that the Abbocy would typically have. After this, the chosen must kill the swan they have brought up. This, accordingly, is so that they themselves will be ready for the pain that they will feel should they betray Norlane to Talos.

Be it farmer, hunter or shepherd, the Eternal of Beasts and Harvest requires many things to become a full Cleric of. There are nearly two dozen trails, from raising a wolf to maturity, to growing and reaping a first harvest to slaying a minor apex predator. The final and greatest trial however, requires the cutting off of one's own ring finger, or similar digit, and sending it to the Temple where it is buried under the Tree of Harvest. As such, full Clerics of Kursag are always recognizable for missing a particular finger. Accordingly, this finger helps feed the Tree and consecrates the bond between Kursag, his followers and his creatures.

Clerics of Vanedell are chosen based on aspects that are typically lone survivors, refugees or gravediggers, to name a few examples. The Moth Eternal demands little but gives much. Accordingly, there is only one true trial although priests of the Eternal prepare the chosen person much for it. Once they are ready to undertake the trial, they are left in a casket, three feet under solid packed dirt, for a week in the dark. They are fed air and water through a thin tube at the head end of the casket. Should a chosen decide they are unable to complete the ritual, even then there is no letting them out until it is finished. This ritual is meant to prove that they are as close to Vanedell as they can be until their final death.

Other than Talos, Cazuma is the single most feared Eternal and his followers are evidence of this. Past Clerics have been chosen from murderers, soldiers, executioners and more. In addition to this, Clerics of Cazuma typically begin their training past an early age because of this and are often the oldest type of Cleric upon initiation. Once they have been found out and released from their last position or job title if need be, the chosen is fed several herbs, inducing them into a strong high-like state that also acts as so that the subject tells the truth to their full ability before they are given a knife and docile creature to kill, such as a rabbit or chicken. Once they have killed the creature, they are asked if they felt any strong emotion by one of the head priests of the Abbocy. If the answer is yes, they repeat the test until their answer is truthfully no. This process continues with increasingly complex creatures until they are presented with a convicted heretic sent by the Temple. Should the answer still be no, they are fully initiated as true representatives of the Cold Eternal.

There is little to progress in when being a Cleric. One is chosen is to be a Cleric when their region's Cleric of a particular Eternal either dies or is excommunicated from the Abbocy. Once this happens, the priests of that Abbocy go out and according to the custom the now-gone Cleric's Eternal, find a new, typically young, Cleric to replace them. Once chosen, they are brought back to the Abbocy where they begin training under the regiment of their particular Eternal. It may be many years before the Cleric surpasses all of the challenges set forth, as all are required to be surpassed to become officially a Cleric of that region's Abbocy. During this time, the Cleric in-training is taught a number of skills relating to combat, politics, strange creatures, history and literature. Should a Cleric choose to deny their role, they will be either sent to work seven years in the Pit of Exiles as their Abbocy sees fit or be executed.

Clerics here are almost always heavily revered. They are perhaps the most universally welcomed in this Realm due to recent events not only in ancient tales but more recent historical events as well. To simply see a known Cleric go through your village is in itself seen as a huge ordeal for many Old Blood villagers. It is not uncommon to see a large portion of people within a society to prepare gifts and lodging for a Cleric ahead of time, especially if it is for a special event or holiday.

Ever since the Banishment, Clerics have not been allowed into Equinox. Those that have managed to pass through, usually in disguise, and were found out were exiled. Those who had been exiled and yet returned and found out where promptly killed, raising tensions high between the Temple and Equinox, but for 1000 years, until the Year of Blood tensions were eased only through a hard peace and dozens of Lodge interceptions. These days, Equinox allows only Clerics of Luna to travel across its borders and there is always word of another Abbocy sending its best to that colorful Realm.

Despite Unside's reputation, its treatment of Clerics are typically less severe than in other places. In fact, only after the Treaty of Years did Unside in general truly begin to reconsider whether Clerics from the Temple would be allowed within the Realm. These days, depending on the established area, those who live there may or may not welcome Clerics from a Highsun or Equinox Abbocy as many of the lower places within Unside still have the memories of the Temple's Treatment of the Year of Blood still fresh in their mind. However, despite many Abbocys being destroyed during and after the Year in Unside, many still remain for one reason or another, whether the local populace cares for it or not.

There are few Abbocys within Cevaria, not because of disbelief or intolerance, but rather because of the dangers across this Realm in particular. Even whereas Equinox and Unside are full of dangers, they are relatively civilized and becoming lost is not such an issue. This is not the case here, where even the most well traveled roads are still arduous to go on. As many intelligent inhabitants of Cevaria revere various tribal deities and faiths, most of them still welcome, if at least the aid of most Clerics. To have one pass through the depths of Cevaria is just as, if not more rare, than those who go through Equinox. Attempts to establish Abbocys in the lower depths have been met mostly with failure for several reasons, be it attacks from more feral creatures, becoming lost, cave-ins, etc..

The first Clerics were chosen by Saint Dylun, according to the old tales, all anointed at once so as to not favor any Eternal over the other. From here, the first Clerics traversed Highsun all together as a single team known as the Silver Hand, establishing the four Abbocys across Realm. First in Verdentia, then Teifel, following in Lanavar and finally in Hyborea. This route would become known as the Speaker's Path, due to the Silver Hand's conviction and truth in the ideals they held dearly on their journey. 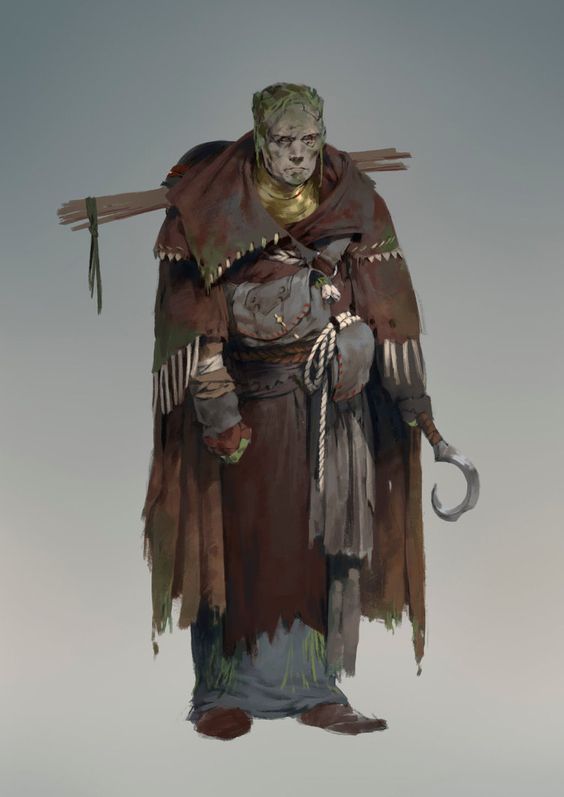 "At first the Cleric of Luna, an Old Blooded of some kind, looked up and down the tree from the inside. He was old, scales mottled, wore little in the way of actual defense other than a few metal rings placed around his body. A sense of death permeated the area but none of us could put our finger on what was about to happen, not really. For a while, I remember that the further on up we went the more a kind of fuzzy yellow moss covered our path. After some walking up the spiral case that lead up the trunk, as it got even denser with moss, I think he knew right then and there what was about to happen. The Old Blood placed a hand on the one in front of him, a tall burly creature covered in scales and sent him forward. Right in its thickest, about halfway up the trunk, a creature made out of the yellow carpet itself tried to push him off the case and down the tree. It scratched his face a mighty bit trying to push them off but that was start whatever that Cleric had conjured. Right then and there, the moss thing went up in hot flames, shrieking something awful before falling off the case itself to the base of the trunk below. We met no more resistance on the way up after that." - Belbet, Mutt Hunter, reminiscing on an 1028 expedition investigating a massive tree that claimed to have sprung up during the Year of Blood.