Lithe and agile. Relies on dodging and casting quick spells during combat.

Stitches on most of her limbs.   Elven ears.   Tattoo's all over her body, used for storing mana and spells.

Has the power to imbue puppets and dolls she created with mana, allowing her to control them. She can control up to 60 at a time and can teach them a variety of spells. The larger the puppet, the more mana it costs to maintain in combat.     Her mana reserves are somewhat large, but her extremely high aptitude for efficiently chanelling mana is considered to be second to none. As such, spells that normally require large amounts of mana are reduces to trifling amounts.     Her signature ultimate attack is Curtain Call - DIE FOR ME .     Felicity forcibly takes control of a victims soul, controlling their bodies movement. A stage is manifested magically, with a variety of show puppets on stage. The victim is then forced to dance for 30 seconds. If the victim cannot break hold of the spell in time, they will finish the dance and their heart will instantly implode. The stage is then lit on fire, then lined with a variety of magical bombs for an extra dramatic explosion.

Ousted by her village in an unknown territory, Felicity has known solitude and loneliness throughout her childhood. With nobody to talk to and with her parents executed due to her unexpected latent magic powers running rampant, her grief eventually manifested into her favorite doll, one her mother lovingly sewn together for her.     Over time, her powers grew more and more powerful. What once was a mindless moving puppet became a completely sentient and highly intelligent simulacrum of her soul.       And so she created. More and more puppets. More and more filling her army of vengeance. With a heavy heart, she set upon her old village and razed it to the ground, not even sparing the fellow children. Felicity believed her time on this disgusting world was over, as it held nothing of value for her anymore. What use was this life without a singular purpose?     Then... she met Aymeria Aldynn, Forgotten by Time .

The partner of Aymeria Aldynn, Forgotten by Time , the two of them are the sole members of The Inquisition.

Loves to pull pranks and is generally playful. 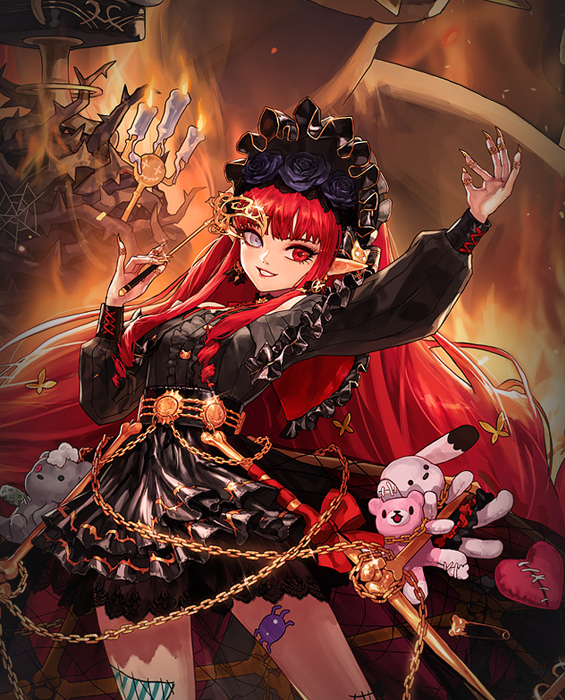