In peak physical performance, considered to be one of the best War Mage's in all of Faeven.

Has the power to control 2 of the 7 Deadly Sins, SLOTH and WRATH.     Can summon Vallacre the Slaughterer, said to be a threat even worse than the Primordials.     Can summon Nyarlathotep, AKA. Nyarly. Said to be the physical manifestation of SLOTH. Has innate magic powers that are nearly unmatched in all of Faeven.     Aymeria's signature ability is Sinful Technique - Carve and Spit     Aymeria manifests the Forbidden Fruit and consumed it, granting her the power of the 3rd deadly sin, LUST.   Her mortal shell temporarily takes form of the Original Sin, taking on a more daemonic and primordial form. Her form tempts mortal men and women, showing the true light of their sins for all to bear. As they are charmed, Aymeria manifests the Original Sin made into a physical weapon known as Oathbreaker. She then rushes forward, dealing nearly one thousand hits within 5 seconds, sundering their body and soul.

Her signature set of serrated scimitars, JUDGEMENT and ENVY. Forged by a Senju blacksmith, making them almost unbreakable. They can be shifted onto eachother to transform into a staff.

Born on the outskirts of a bordertown Durandal city, Aymeria awoken to her powers of summoning the dead after seeing her friends die one by one during the Bloodsong War. After being forcibly drafted to the war effort, Aymeria struggled with her dwindling psychosis and the true reality regarding her mental state: she enjoys hurting people, not just Daemons. After a particularly devastating defeat during an operation, Aymeria faked her own death and fled further into the countryside.     Several days later, she met Felicity, and eventually founded the Inquisition.

Head of the Inquisition 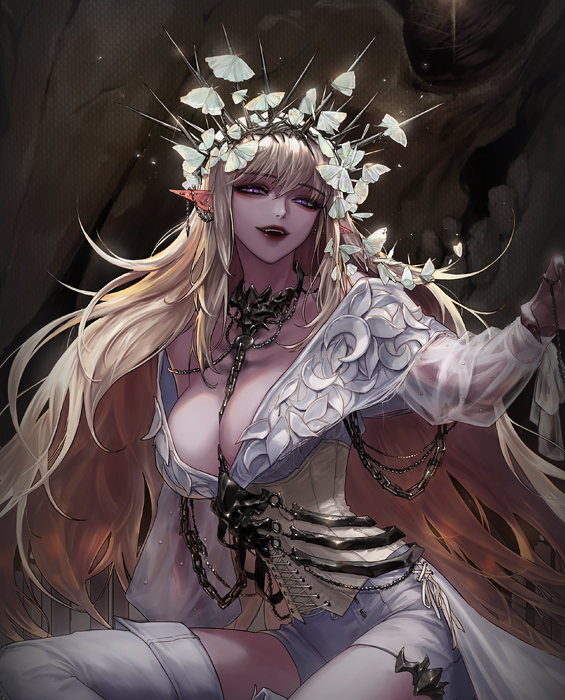