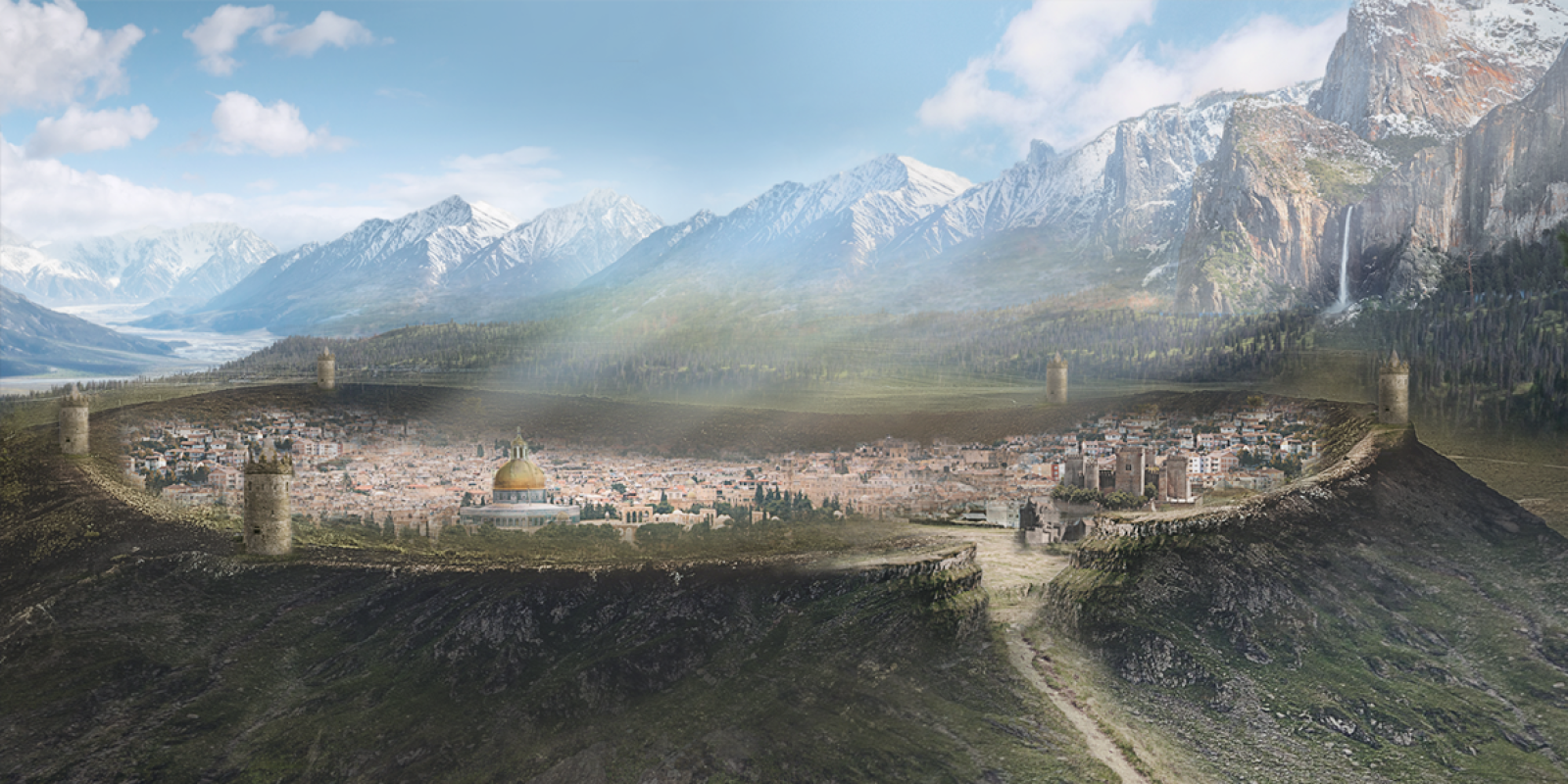 The Brass Bowl is a famous city situated in the north east of Tentotta near the picturesque Larthtera Mountains. The city is well known due to it's unusual location - it was constructed inside of an impact crater and is believed to be the site where The Shaper fell to the world and gave life to all beings.

The impact crater was once known as The Shaper's Seat where The Creator of the world came to sit and rest. Wanting to be as close their god as possible, people built a settlement in the shelter of the crater. Local historical documents claim that The Shaper's spirit protects the city from all natural harm.   To keep this divine favour, the early architects of the city constructed the core layout into a six pionted snowflake design - the holy symbol of The Shaper. The design remains to this day and many pilgrims come to this sacred site even in modern times to pay respects to the oldest of the gods.   The Maker's Temple is one of the largest buildings in the city, and it's brass roof glints like gold in the sun. As many new cultures follow different beliefs, temple is open to all and welcomes every race to meditate, pray or show gratitude. There are different areas in the temple to suit everyone's needs, including a peaceful upper balcony area for evening ceremonies of singing brass bowls to resound through the streets as the sun sets. 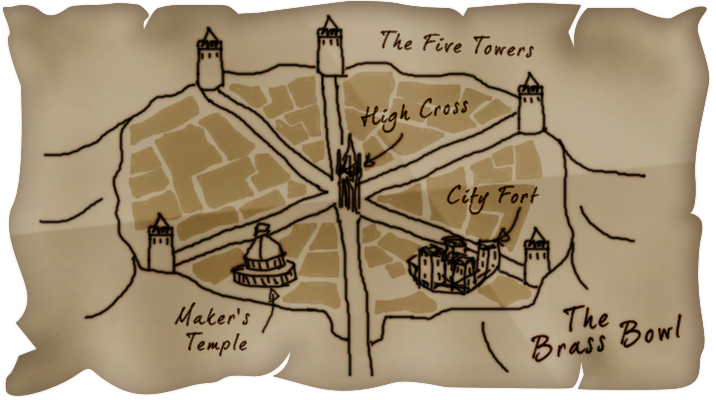 The city is well defended by the steep outer slopes of the ancient crater. A single entry gate has been carved out of the mineral-rich natural wall to allow access for traders and pilgrims and can be easily defended during times of unrest. It is rumoured that there are hidden tunnels that lead out of the city - most are for waste but the Mohrim Miners may have dug some small shafts through the rock to create ventilation into the Mohrim Mines.   Five tall towers overlook the city and surrounding area. Each tower represents a Lord of one of the five races to watch over the sacred city. The heavily fortified towers serve as small barracks for the city guard and are strategically positioined around the crater's rim, allowing patrols to cover each district.   Near the entrance of The Brass Bowl lies the impenetrable city fort (which serves as a strong deterrant for anyone foolish enough to storm the city).

The Brass Bowl is an ancient sacred site and many pilgrims visit the city to pay homage to The Shaper and take part in the ancient traditions and ceremonies within the city. The Shaper's District becomes a hive of activity during religious holidays and many traders and shops sell trinkets such as ribbons, pendants and small brass prayer bowls that make a mesmerising sound when rung.   However, the biggest source of income for the city is the export of a unique material called Mohrrim Crystals. They seem to be unique to the crater rocks and none have been located in the nearby Larthtera Mountains. The Mohrrim crystals have a unique quality to them that can make weak virtues into strong ones. This was first discovered when someone in the Mohrim Mines accidentally tossed a shovel full of coal containing some crystals into their furnace. The tiny flame roared into life and flames hungrily licked out into the tunnel, causing five severe injuries and one casualty. The Mohrrim crystals have been studied and experimented on, and are now used in moderation for fuel-efficient furnaces and steam engines.   Mohrim Miners have discovered a secondary use for the crystals by grinding it down into a dust called Ihrrum. Ihrrum dust has similar enhancing qualities to the Mohrrim crystals, with the side effect of weakening strong virtues as well. It was first discovered by a Mine inspector, who noticed that throughout the course of a day - the strongest Golun miners would grind to a halt, whilst the frailest Human slaves would gradually get stronger the longer they worked.   Ihrrum is now classified as a controlled substance and is illegal to use in competitive sports. Only the captains of the city guard are permitted to use Ihrrum for force. Generally the dust is used for recreational or healing purposes.
Log in to World Anvil to view
bonus content and secrets!
Type
City
Population
43,000
Included Locations
Related Materials

The city has come to be known as The Brass Bowl for all of the brass used in the city's architecture, and also for the tradition of using brass singing bowls in religious evening meditations. The city was originally called Shaper's Seat in ancient times, which eventually became Perse after many years. Perse is the official name of the city, but locals from the region of Tentotta just call it The Brass Bowl.

Tentotta is a hot, dry region home to The Great Tentottan Desert.

The divine being shrouded in tales of myth and legend who created The Brass Bowl of Tentotta.

Articles under The Brass Bowl

An abandoned and haunted section of the mines in The Brass Bowl of Tentotta.