Krat is a well built red Vulpera. His wispy fur hides a large portion of the scars on him, but is often betrayed by lighter patches where mended wounds have regrown.

His history is unknown, even to him. Outside remnants of a memory of being taken from his family, almost his entire life was spent in the Sethrak slave pens of Vol’dun. He was sent into the fighting pits, made to kill whatever his opponent for the week was, then thrown back in. This routine never changed for what he now knows was close to nineteen years.   It wasn’t until the Horde liberated the Vulpera from the slave pens that Krat was introduced to the world. The real world. The one full of magic, indescribable powers, and entirely new environments. Barely able to speak, borderline feral, Krat was thrust into Azeroth with little warning.   He shortly found himself gravitating towards other kin he could find in the Horde, skulking around familiar markets of the Dustpaw. They seemed to understand his plight a little, even if he didn’t, and took him in as muscle.

Looking after a caravan in the new world was far more difficult than he anticipated. Many run in with local Orgrimmar denizens, be it with the law of The Thirteenth or the ruthless Copper Street, forced him to figure out the world at breakneck pace. His rushing in angrily often got him and the Dustpaw into trouble.   Magic was above him, enough times throwing his face at it had proven that, but a chance encounter in Pandaria gave him a glimmer of something. The Red Crane, sensing a great fighting spirit wandering through Krasarang, reached out to him in a vision.   This short, angry furred being had been fighting all it’s life, training their body and spirit without even knowing. A rough gem that could be something far more if it knew what to do with itself. A Celestial wouldn’t be doing it’s duty if it left someone in it’s land carry on in such confusion.   With at least a goal, Krat could work towards competing with the powers of the world. But returning to Orgrimmar claimed his temper for almost the final time. The Grunts didn’t believe the Dustpaw tales about the Copper Streets, and the numerous attacks on his people by them from the shadows forced the stubborn fox into drastic measures. On a dark night, he crept away to confront one of their ringleaders, barely surviving the fight.   Technically, he died.   Fragments of a dark, swirling place is all he recalls of it, along with some unwanted Blood Magic being applied, but he was pulled free. He was brought back by the quick thinking of his friends, waking up resting on the lap of one of the kin dutifully looking after him. Yeinni. They’d been inseparable ever since.

Coming back from death itself, Krat felt changed. Having to rest for a whole month forced him to think about his actions, being able to do little else. His anger at those against his kin wasn’t gone, but it was nowhere near as vitriolic. Controllable. Now he had more than just himself to think about; the caravan that had rallied around him and his new partner all had to be thought about before any selfish action.   Over time, after recovering, the Copper Street problem sorted itself. The Dustpaw got their vengeance in their own way, with the help of their allies. True to the Red Crane’s word, Krat had noticed a strength in his spirit when he focused on it. As much as staying still was a struggle, he was taught by Pandaren Monks how to use this to protect his people. A new favourite of his, a surge of Lightning in his fist, would become a hallmark of his on the field of battle.     Finding himself supervising the entire caravan as it’s head guard, responsibility and purpose had calmed this one untamed ball of rage. The rough gem was now a shining beacon for the Vulpera. 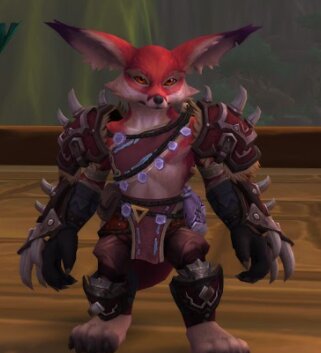