Dathomirian ex-bounty hunter trying to overcome his personal demons and do the right thing while serving an underworld organization.

Dathomirian ex-bounty hunter trying to overcome his personal demons and do the right thing while serving an underworld organization.

Traditional tattooing over body and face, excluding the hands. Also several scars -- some under tattoos, some over. Most prominent is a circular scar roughly 2 cm in diameter on the front of his left shoulder, with a matching scar on the back side from being impaled by a Zakuulan pike. Also long scar across pelvis area from a lightsaber slash. Light scarring over hands from having tattoos removed.

The tattooing and yellow eyes dominate his facial features, and it's hard to look past to see a Roman nose that's been broken at least once and thin, harsh lips. He has a strong jaw and chin, and his eyes usually have an appraising look to them, giving an impression of shrewdness.

His earlier his tattoos are ad-libbed versions of actual Dathomirian markings, inked during his time with the S'surians. He later took a legitimate interest into his heritage, and the tattoos added after that time are more accurate to the kind common for his ancestors.

Saggan has three tiers of apparel. At one end, he has what he calls casual. This is generally just typical wear for a low- to mid-level citizen of Nar Shaddaa, consisting for the most part of synthleather and cheap linens.
"Business Casual" is what he calls his set of lighter armor. It consists of a chest plate worn under a long synthleather coat, with armored plates added to boots, gloves, and pants. He carries a rebreather when in this suit, but only wears it when needed.
His full-on "Business Suit" is a suit of powered Corellian battle armor with integrated weapons systems.
It should be noted that he will dress as casually as he thinks is prudent, even eschewing the wearing of blasters when performing security duties for the Elysium or the Rising Sun.

Saggan has a latent Force sensitivity that manifests itself as gut feelings and hunches. He is unaware that this is anything more than instinct or luck.

Saggan is an example of an assimilated alien: one who's adopted the wider galactic culture in place of his ethnic culture. Born and raised on Nar Shaddaa, he was involved in the largest gang in the Zabraki District -- The Ssurians -- at age 12. At 16, a bounty hunter by the name of Khan Halcorr, tasked with taking the gang down, spared him and took him under his wing, mentoring the young Saggan as a bounty hunter himself.
Six years later, Halcorr was killed while collecting a bounty on Tattooine, and Saggan inherited all his possessions, including a fair amount of credits, his ship, and a handful of outstanding contracts. Fulfilling the contracts on his own, he quickly made a name for himself.
Over the next few years, he began to become disenchanted with the contracts he was taking and became choosier about the sorts of jobs he'd accept. He found himself not only doing research on the bounties, but also the contractees, refusing jobs if he suspected the bounty system was being abused. Although his reputation as a successful bounty hunter remained, he also became known as one who asked too many questions, had misplaced ideals, or was simply uncooperative.
Also over the years, he sent money home to his parents, who were all still living in the Zabraki District. Although he urged them to move away, his parents couldn't find it in themselves to do so, although his sister managed to avoid gang involvement and move to a better district.
In 18 ATC his family was killed as retribution for action against a swoop gang Saggan had all but wiped out over a decade prior, the Bloody Baylegs. A holonet search will yield stories of what appears to be a particularly brutal gang war that put the swoops out of business at about that time. The gang made a comeback at about the same time Saggan's family was killed, and although there's been a steady string of violent episodes involving them, there's been nothing on the scale of the previous incidents. Very recently, the gang seems to have gone underground once again.

Having left the bounty hunting business, Saggan came across the Elysium and applied for regular work. He was placed on retainer as a "problem solver," making himself available for any job that didn't clash with his ideals until given the position of the Elysium's Security Regulator. After several months in that position, Saggan took a leave of absence to address some personal business and relinquished his position as Regulator. On his return, he reclaimed his original position as a problem solver while also doing work on the side for parties connected to the Elysium to whom he claims to "owe a debt." Recently, he was appointed as the Elysium's liaison to its allied organizations, The Shadow Lounge and Dark Primacy.

Apprenticed to a bounty hunter, Saggan learned the skills necessary to track down and subdue fugitives -- or kill them if necessary. He also learned the basics of the business side of the job as well as basic starship piloting skills.

Currently employed as a liaison representing the Underworld Elysium, an underworld organization that operates a smuggler's port on the Outer Rim wasteland planet of Lok. Also on retainer with the Elysium as a "problem solver," as well as open to private contracts. Previously a BBA-accredited bounty hunter.

Saggan failed to protect the teenaged son of friends, resulting in the boy's death. Actions against the responsible parties prompted them to murder the boy's parents as well as Saggan's parents and sister.
As the godfather/adopting father of his friends' daughter, Luto (now grown), he considers himself a failure.
He also believes he caused the death of longtime friend and contact -- and occasional lover -- Nellea Firalan.

Saggan was exposed to several of the shards of the Darkstaff, which attempted to manipulate him, still carrying the memories of those attempts.
He also carried out executions of several young gang members on Nar Shaddaa, triggering intense nightmares and feelings of guilt.

Saggan often refers to himself as not being very smart. He is, in fact, much more shrewd than he lets on.

Saggan has done some bad things in his past, and even though he constantly seeks to do the right thing, he always seems to be presented with impossible choices. Guilt, therefore, is a major influence in his life. He's constantly trying to "pay off" one moral debt or another, whether real or imagined.

Saggan is a sexually active heterosexual. He's careful to avoid making commitments; early in his career this was because of his constant travel across the galaxy. Currently, it's a combination of old habits and a desire not to disappoint or hurt a lover.

"In my business, it's better to be underestimated than overestimated. Braggarts die young."

Saggan suffers from intense nightmares and rarely sleep for more than an hour or two at a time. Because of this, he's often tired.

Zanja Vazda, great-grandmother: Only known surviving relative and Clan Mother of a coven of Force-wielding witches on Dathomir. 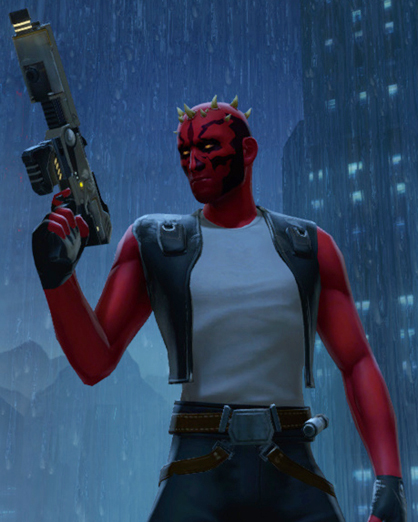 I met with Konstanz and Kaci on (in?) Mek-Sha last night. We were at a cantina they were both familiar with and after a few drinks, I let slip the reason I haven't had a full night's sleep in the past two years or so. I tried to cover it up, but Kaci called me out on it in that blunt way she has. That girl has a nose for nerfdruk and a passion for comparing her past misdeeds with those of others. I think she smelled blood in the water.

I could see Konstanz trying to empathize with the guilt I felt – not only for what I’d done on Nar Shaddaa, but for causing Luto’s brother’s death, then her parents and my own family. I think I’ve told Kons where Luto is now, but I’m not sure Kaci knows. That’s another source of guilt, although I left it out of the story. Part of me – the adopting father part, I guess – wants to know whether she survived her ordeal. But the rest of me would rather not know.

So I’m left wondering what they think of me now that they’re aware of all the deaths I’ve caused, both directly and indirectly. And also whether telling someone else – Firebird was the only other living person I’ve confided in – will cause the nightmares to finally cease.

The major events and journals in Saggan's history, from the beginning to today.

I met with Konstanz and Kaci on (in?) Mek-Sha last night. We were at a cantina they were both familiar with and after a few drinks, I let slip the reason I haven't had a full night's sleep in the past two years or so. I tried to cover it up, but Kaci call...

The list of amazing people following the adventures of Saggan.