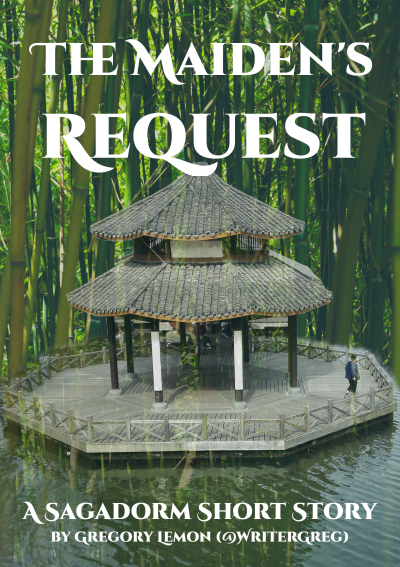 In the world of Sagadorm

The old lotus seat cushion Henrik carried down the palace hallway provided little padding. It was difficult to see the warty toad resting on its dusty brown surface. No one could have found a more insulting vessel to carry the newest royal companion, and Henrik was sure the emperor tried.

The princess and her attendant slowly walked in front of Henrik. Jing stopped at a bench and sat. “Please go and prepare my chambers for the night and wait for me there.”

The attendant bowed and left them alone. Jing put her face in her hands and let out a groan of frustration. “Henrik, what am I supposed to do?”

Her face shot up out of her hands, and she yelled, “I forbid you from calling me Princess ever again!” The flash of anger was gone as quickly as it came, replaced by a resigned sadness. It hung between them like a heavy curtain. After a moment, she gently patted the open space next to her.

“Please sit with me.”

Henrik sat, subtly turning the cushion and the toad away from her view. No matter how he turned the cushion, the toad shifted to look at the princess.

“My father is furious with the shame I’ve brought to the palace. That”—pointing at the toad—“is the first Cursed to enter the palace since my father banished the previous Grand Secretary for treachery. He loved him as a son and trusted him like a brother. When the betrayal was discovered, Lady Nevena cursed him to be a golden tree snake, fast enough to flee, but too weak to harm humans.” Jing leaned her head back against the wall. “I was young at the time, but I still remember my father’s hurt and anger. I never wanted to be the cause of something like that. And that is what I have done tonight.”

Her eyes filled with tears as they sat together in extended silence. She reached out and gently took Henrik’s hand. She smiled as they looked at each other. “Thanks for listening.”

The toad said, “Is there anything I can do to help?”

“You want to help?” Jing leaped from the bench as her tears returned. “Leave! Leave this palace and never look at me again!”

Henrik and his brother barely spoke after entering the servants’ buildings. He placed the cushion on the floor of his room and went straight to bed without changing. Visions of Jing running and crying haunted Henrik’s attempt to sleep. The desire to fix the harm Frederik’s actions caused kept him awake. Guilt mixed into his thoughts because he thought more of Jing than his cursed brother.

Henrik rolled over to check on the toad. The cushion was empty. He shot out of bed and walked quickly toward the palace, searching, and hoping he wouldn’t attract a patrolling guard’s attention. Henrik neared Jing’s chambers when a woman’s scream startled him.

“Jing!” Henrik rushed to open the door to the chamber. In the dim light from torches outside the window, he only saw the closed drapes of Jing’s canopy bed.

The toad came flying out from behind the drapes. Henrik ducked and heard a loud thud on the wall behind him, followed by a much larger crash on the floor.

The attendant rushed to the bed and opened the silken bed curtains. She sat and spoke calming words at the princess’s side. “My lady, are you all right? What happened?” Fury coursed through Jing’s eyes as she pointed to where she threw the toad.

Henrik heard shouts from soldiers running along the halls. He turned to see a broad-shouldered man groaning and stirring in the corner. The man’s arms and legs fumbled as if he had forgotten how to use them. Henrik grabbed a discarded robe and covered him. “Frederik, you idiot!” Henrik pulled

Frederik to his feet. “We need to get out of here, now!”

“Jing, this is my older brother.”

The anger on her face shifted to a confused panic as her glare shifted between both men. She whispered to Henrik. “You can’t be found here!”

Soldiers burst through the chamber doors. The two men did not resist as they were forced to the ground and tied with ropes.

Henrik and Frederik stood in the middle of the royal court, waiting for the emperor. They were surrounded by palace guards, and their ropes had been replaced with iron shackles and chains.

“You look pretty good, all things considering,” Henrik said. “But I still think you are an idiot.”

Frederik chuckled as he rolled his shoulders but then winced. “It hurt more to transform this time.”

“That was probably the impact with the wall.”

Frederik looked down. “Couldn’t you have grabbed a man’s robe?”

Indistinct yelling could be heard from the hall outside the room. The doors behind them slammed open, and the emperor stormed to the throne. “Are these the foul scum?” he bellowed.

The empress and Jing entered the hall and came alongside the wall. Jing’s eyes were red. She looked like she had run out of tears. The empress gently held her shoulders as they stayed in the far corner.

The emperor paced back and forth in a rage. He sized up Frederik and had a new look of hatred for Henrik. Finally, he broke his furious silence. “How dare you enter into my daughter’s chambers! You will both be executed for your crimes against the crown.”

Lady Nevena entered the hall. Her blue robes glowed brighter in the hall as the servants were still rushing to light candles around the room. “Dear Emperor, I believe you should hear them before you continue.” Her demeanor was calm, but there was radiant authority behind her statement. It was not a request.

“Hear them? They will be executed! Traitorous thieves who were caught with my daughter!”

“I snuck into the palace,” said Frederik. “He tried to stop me.”

The emperor’s face leaped between the brothers, his family, and the fairy. After a moment of swirling glances, he let out a quick huff and turned to sit on his throne. He motioned for all to take chairs along the wall. The empress and princess took their places in the smaller thrones at his side.

“I will hear you, as requested by Lady Nevena.”

Frederik stepped forward, and the guards drew their swords to keep him in his place.

“Most honorable Emperor, my name is Frederik. I am the son of King Ulrik and Queen Caroline, Crown Prince of Rikenvatten.” He swung his shackled hands to his right. “This is Prince Henrik of Rikenvatten, my younger brother.”

The shock of this proclamation spread to all who were in the room. Lady Nevena smiled and said, “Emperor, these men speak the truth and are men of honor, as I stated before.”

“Honorable men are not caught in my daughter’s chambers!” yelled the emperor. A stern look from Lady Nevena and an increase in the glow of her aura forced him to compose himself. “Explain,” he growled at Prince Frederik.

“Your Excellency and court of Chienhu, last year my brother and I were traveling through our kingdom and came upon a gang of thieves stealing from a royal outpost. As I led the charge against them, I was transformed into a toad by an evil fae in their number. My brother returned us home, seeking a means to restore me to human form. Those who wished to usurp our family’s reign claimed that Henrik murdered me and concocted a fantastical tale to claim the throne for himself. We both had to flee the country until I could be restored. My faithful brother knew I could not survive a winter near our native land, so he brought me here, cared for me, and secured service with Your Majesty.”

“That does not explain why you committed this treachery against my daughter.”

Lady Naveen interrupted. “Breaking a curse, such as this one your Majesty, varies depending on who casts the spell. It appears the fae intended to sow additional harm to Rikenvatten by requiring an outburst of royal anger to break this curse.”

Frederik nodded and continued. “We meant no harm to Your Highness, your family, or your empire. We believed many times that the curse was about to be broken. I alone entered your daughter’s chamber in a desperate attempt to anger her. My brother was too late to stop me.” Frederik bowed before the Emperor. “I humbly beg your forgiveness, Your Majesty. We only request that you allow us passage that we may return to our family in Rikenvatten and clear my brother of the false murder charges.”

Jing whimpered. Her eyes met with Henrik’s, and they shared a long gaze.
The emperor pointed to the princess. “You think I could so easily forgive you when my daughter is in such a state?”

The emperor stared at his daughter. “He tends the horses. How could you fall in love with a servant?”

“He’s a prince from a foreign land,” Jing said.

The Emperor’s eyes narrowed at his daughter. “Did you know?”

“No,” Jing looked at Henrik. “He never told me who he was, but there always was something more about him that I could not ignore.”

Henrik stepped forward. “If it pleases Your Majesty, may I speak?”

The emperor slumped back. “This is madness.” He waved his hand granting permission.

“We are truly sorry for the harm and distress that we have caused. I hid this from Your Majesty and Highnesses so that those who sought our demise would not hear rumors of our location and put your subjects in danger if they followed us here. Our kingdom is in peril from those who would destroy our family. It is imperative that we leave and restore my brother’s claim to the throne.”

Henrik turned to Jing. “I am sorry that I could never tell you who I was. Your kindness sustained me through this trial. If my kingdom were not in peril, I would ask your father for your hand.” Henrik stared deeply into the eyes he had long cherished. “I love you, Jing.”

Jing clasped her hands to her mouth and laughed through new tears. She cautiously looked at both of her parents and then leaped from her throne. Henrik almost lost his footing as she threw her arms around his neck. “I will come with you.”

“You will do no such thing!” bellowed the emperor.

The empress reached out and placed her hand on the emperor’s. With the faintest touch, his protest was silenced.

Henrik, still in chains, moved so that he could look into Jing’s eyes. “Your father is right. You must stay here.”

“I don’t care,” she whispered.

“Will you ever return?”

“Henrik the horse master needs to leave. But I will return as Prince Henrik of Rikenvatten and court you properly.”

“I don’t care what you’re called. Just promise you’ll come back to me.”