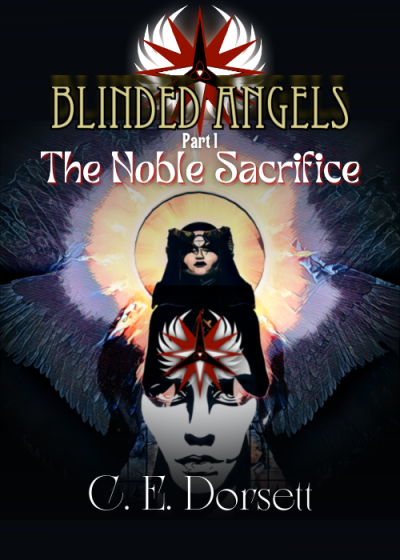 Chapter 3: Prayers in the Chapel

Sister Lydia Talbot kneeled in prayer with her sisters around the solitary red candle. Her knees pressed into the hard, cold stone floor of the convent. Shadows stretched from the high pointed windows over her and her sisters in faith. The leering moon sought a glimpse of the sanctum.

Luminous golden butterflies emerged from the dark skin on the back of her hands. They encircled them as they said their prayers to the Great Mother to protect the village from the villainy of the liars who lost access to magic centuries ago.

She’d grown up away from the technological terrors of the unsotha, or wrecca. These liars, exiles, refused the honest path of the giants. Her people didn’t abandon their faith either, but they still pledged themselves to the covenant. They weren’t liars, and greed was a vice in short supply among them. Lydia imagined the cruelty of the wrecca world as clear as any nightmare she’d ever had.

To her right, Sister Rayvinn, who practically glimmered in the soft candlelight, manifested silver braids from her hands to weave the community together. On her left, Sister Ines summoned forth a shower of cleansing light that rose through the air to heal their people.

The flame of the red candle between them turned black. Each of the sisters finished their last incantation and listened reverently.

“Sisters.” The spectral, accented voice of their Mother Soteria caused the black flame to flicker as it carried her voice into the room. “Three wrecca wandered into our lands. The Salian Guards of Blackwood Abbey have been alerted, but it would be better if we investigated their presence first to discover how they made it past our defenses. Sister Ines, check the strength of the barrier. Sister Rayvinn, speak to the leshy. Sister Lydia, go to the Shrine of the Manes and find out what they know.”

Lydia choked down her desire to protest her assignment and intoned with her sisters, “As you wish, mother.”

Mother Soteria wouldn’t punish her for speaking up, but it was unnecessary to make a fuss. The Salian Guard would show up before too long, so she didn’t have too much to fear from the wrecca. Besides, she had magic and could defend herself from whatever they threw at her.

She stood with her sisters and donned her simple white porcelain mask. She nodded at them and left the chantry to retrieve her broom. Strictly speaking, she didn’t need it to fly, but added to her wimple, scapula, and tunic, it would complete the image of a witch the wrecca made for themselves. Intimidation was a valuable first gambit when interacting with the exiles.

A promise weighed on her heart, another obligation that she brought with her to the order. If any of the exiles were ever to return, she swore to send a message.

Energy crackled from her hand into the wood of the broom, and it floated at waist height before her.

Lydia sat on the broom like she would on a ledge. She whispered a prayer to the winds and kicked up into the sky. Flight was freedom, even if she had to pay the cost for it. Sure, later tonight, her muscles would ache down to the bone, but it was worth it.

She flew in a spiral high above the convent, and whistled the secret song into the night air, giving it enough magic to carry to the ears who needed to hear it.

Arising like a soft crescendo, the heavy beat of dragon’s wings approached from the west. Her green and black scales glistened in the moonlight.

The book wyrm, Jules, flew toward her with the fae Orla riding on her back.

Orla’s face shone silvery white like the moon. She whispered the words and wove with her fingers the web of light between them so their words would carry without having to shout.

“May the peace of the blinded angels find you well,” Orla said, as if they were sitting across from each other at a table in a quiet room.

“And may their sacrifice ever live on through us.” Lydia lowered her head as she spoke. “Three wrecca have made it into the wild, and I was told if this were to happen that I needed to inform the order.”

Jules puffed out a cloud of smoke. “I am sure they know already, if this is that, but we will pass along your message.”

“How am I to recognize if they are the ones?” Lydia asked. Dragons and fae were not the ones to seek simple answers from. Nothing the order did was ever simple, either.

“The standing order doesn't say.” Orla said in a businesslike tone, then added colloquially, “But you would think if they really wanted us to find someone, they would give us more details, wouldn't you?”

Lydia laughed. “Well, I suppose it wouldn't be much of a secret society if they didn't keep secrets even from us.”

Jules laughed, and flames flashed into the air below Lydia's feet. “There are many rumors about shadows haunting the night. Some say that the deathless has returned.”

“Why can't people except that deathless has finally died?” Lydia rolled her eyes, remembering the tales of the battle of winter’s end.

“Maybe because he's called the deathless for a reason?” Jules made a smoky hiss that anyone familiar with dragons new as a sign of sarcasm.

“After all, how many times has he been reported dead?” Orla said.

“But they found a body, and it hasn't moved, this time he is really dead.” Lydia said.

“That is not dead, which can eternally lie…” Jules said, adding a deep chested echo to her voice.

“But this time I assure you, the deathless has truly died.” Lydia shook her head. “So you truly know nothing about the wrecca we're supposed to be keeping an eye out for?”

“Only you do. Did you find it odd that they keep bringing it up at every briefing? If it was so important, what aren't they telling us?”

The Blinded Angels, like most secret societies, compartmentalized the information they held and sought, so only a few beheld the complete picture. Unlike their counterparts, they weren’t ancient, arise alone with the wrecca nation in which they were founded. How many secrets we kept in their vaults?

It made no sense for the order to fixate on the fate of a particular exile. The only reason that possibly made sense was that they were trying to revive one of the old hunter's guilds, but there hadn't been open conflict between the magical and non-magical world since the 1940s. Hopefully, the mistakes of the past were not about to repeat themselves.

“I would keep an eye out, though, if I were you,” Jules said in a hushed tone, well as muted as a dragon could be. “If chaos really is brewing, you will want to stay as far away from it as you possibly can.”

“What exactly do you mean by chaos?” Lydia asked.

Orla glanced around to ensure that they weren't being observed. Light flickered in her eyes and she extended her vision far beyond what she could ordinarily see. “There has been a great concern growing in the county court. We're not entirely sure what it entails, but I can say with some certainty that the dark gentry no something they're not telling the rest of us.”

“They are not even telling the other dragons.” Jules said. “I don't know. It's not strange for dragons to keep secrets from other dragons, but this is different. I've had a very close relationship with Severina for ages, and every time I ask her about it, she changes the subject.”

“Do you think it's just a bit of a family scandal or something more?” Lydia asked.

“Well, I know most of the family scandals, and if this is one of those, then it must be quite a doozy if they're hiding it even from me.” Jules spoke with the solemnity uncommon to her.

“Come to think of it, Mother Soteria has been rather cagy about something lately. I just thought it had something to do with the elders that we keep in the crypt.” Lydia struggled to remember the situations she was referring to. “There are more sarcophagi from the old country scheduled to arrive soon, but I refuse to think they would smuggle anyone dangerous into the country.”

“They don't have to be dangerous,” Orla said, “just someone who isn't supposed to be here.”

This was the one thing that Lydia hated most about being a part of the blinded angels, all the secrets and innuendo.

Mother had done nothing, really, to make her suspicious, and yet here she was doubting her. All things being equal, she never would doubt someone she would become so close to. In times like these, though, all things were no longer equal.

Lydia thanked Orla and Jules and watched them fly off to deliver her message.

If nothing else, she's done her duty, and what else could I ask from her. It was just difficult to live up to her obligations when she didn't know what all they truly wanted from her.

Flying over the stone walls of the convent, she headed toward the wild, keeping mindful of the wyverns recently spotted in the area. They would be difficult to see against the night sky, but sound of their wingbeats should give them away.

Just ahead of her, Graycek’s cackling laughter scared the birds from their roosts.

With a shake of her head and a silent sigh, Lydia descended between the tree branches to the shrine.

Three young people sat in a circle with their backs pressed against one another, shaking with fear as the lanky di inferi Graycek danced wildly around them.

Lydia hovered over the statues of the blinded angels and said, “Stop that, Graycek. You’re lucky I arrived before the Salians, they might have banished you back below.”

Graycek stopped on the spot and curled his lip at Lydia. “Oh, that would be so much worse than being here. I stopped them from running so we could deal with them our way, would your rather I let the leshy have them?”

Lydia responded with a stern gaze before turning her attention to the wrecca. “Now, the three of you must not speak except to answer my questions. Don’t lie to me, and do not try to drag me into your lies. Do you understand?”

The three wrecca passed a frightened glance between themselves, then nodded.

“How did you get here?” Lydia asked.

“On foot.” The male almost snarled at her.

“How did you get past the barrier?” Lydia said.

“We didn’t see a fence or a sign on the path.” The woman said.

Lydia landed before the third person, who hadn’t said a word. “What is your name?”

“Well, Ellis, my name is Lydia. Do you know how you got past the barrier?”

“We just wanted to have a picnic, and got lost.”

Lydia narrowed her eyes. “I don’t think you did.” She took a deep breath and exhaled slowly. “I need you to follow me. Mother Soteria needs to speak with you.”