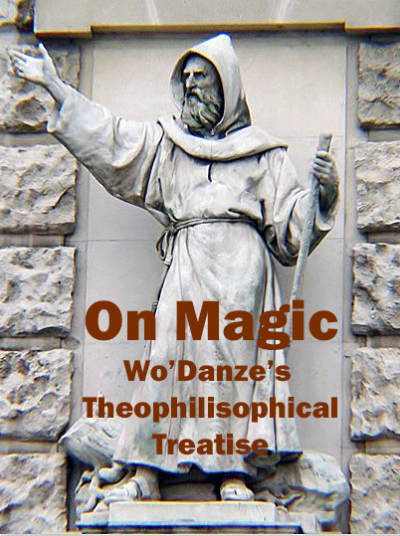 All magic, regardless of domain, has at their root the power of life.  This energy is pervasive and permeates everything in creation.  While our first systematic forays into manipulation of the life force around us have been in the divine realm, there have been well noted incidents with the wild magic of the elements and the impact of demons amongst us.  Despite their difference, all magics at their core have the same power or source of force and energy.

Similar to the energy inside a storm cloud that releases lightening, the life stuff inside coal that is released in flame and heat or the spring floods released by the reservoir of melting snows in the mountains, all objects, animal, mineral or plant have at their core a life force or energy holding the component bits together.  This force is the source of magical power.  With divine and infernal sources, the entities act as a tank or well to store quantities of life energy.  As some authors note, the relative power of the demon or divinity translates to the size of the pool or well of energy that can transform into action by or through the entity.

While all creation contains this force, it can be channeled or exists in certain domains.  Imagine a compass.  The force that channels in the north direction is earth's elemental force.  To the east is air elemental, to the south, fire elemental and to the west, water elemental.  Now imagine a needle pointing from the center of the compass straight up in the air.  This is divine force and the arrow that points downward is infernal force.  While the compass can point in many directions or be channeled in different ways, at their core, the force that directs the needle or travels down the channel are the same.

There is one more type of magical force, the so-called spirit force.  This is a misnomer, as all magical forces have an essence or common form that some authors call the quintessence, which is the transcendent form of all magic forces.  Some argue that the best or most useful type of magic is transcendentalism, but most feel that this snobby internecine view was created by the numerically smaller Shamanists.