Note: the website address directs Explorers, Time Travelers, Refugees and Visitors to a Working 3D Storybuild World. For security reasons the Midtown Ladies Guild requests you contact Ruby O'Degee to book your expedition to Clachan GeeArtan and other worlds that are part of Clachan FògarrachArtan​. We call the 10x, Yx, Zx build in the sky The Great Treehouse. Like any other treehouse worth its bark, members know the password.
Ruby O'Degee is a fictive author and virtual world builder. She believes a good backstory is the foundation for any virtual world. Her first opportunity to visit a virtual world in the fall of 2003 spoiled her. No visible world without a story is going to be enough for her. She is a Myst Uru explorer and refugee who writes her own worlds after years of practice.   There are few virtual (visible, walk through) worlds built with a complete story foundation. Most virtual worlds are historical replicas, venues, games or marketplaces. So she and a group of friends, all fine authors decided to start Age Writing (physical and visible worlds). It's been a long double back experience for Ruby.   It wasn't her decision from the beginning to more than fit square pegs into round holes. Puzzles were all Ruby wanted to solve, but after completing a few dozen puzzles she decided to make her own. Of course, she didn't have a clue about how the magic got done.   When she once asked a friend and popular world building mentor about "when and how to get started?" He answered "now" and "learn while you write."   Ruby trusted him, but she wanted another opinion. A second friend and popular world building mentor said "now" and "learn patience while you write."   When a third friend and popular mentor said "now" and BE the storyteller, she stopped asking. 17 years later, Ruby is a one woman band. "It's hectic," says her retired school marm beneficiary.   She realizes that her story got shoved to the back of the drawer. She needs to concentrate on the foundation of her builds that couldn't come first. Why? Because she is a pre-frontal, lateral thinker who needs to know much before she can know a little step by step. In the meantime she needs to keep it organized and at the ready.   Ruby calls her process Story Building. She develops a piece of virtual property for a purpose. That's a story. She sets down an object. That's another story. So it continues until the story gets told. Ruby's issue? It worked until it didn't get finished. Not yet. But at least she's at the point where it can be finished by an always distracted plotter.   Chronicler and storyteller she will be.

Ruby O'Degee is a documentary fim producer, oral storyteller, voice over actor (the voice of Madge), Cavern player and a stage set designer.   In her spare time she likes to bike ride, watercolor, paint with acrylics, bookbind, create Art Dolls, repurpose Books, raise intelligent cats (Limit 2), read novels, travel the metaverse, pilot her hot air balloons, and build conraptions.   Disclaimer: While Ruby loves to repurpose, she's not terribly interested in repairing much of anything. She only makes repairs and edits when its necessary. And cursing all the while. 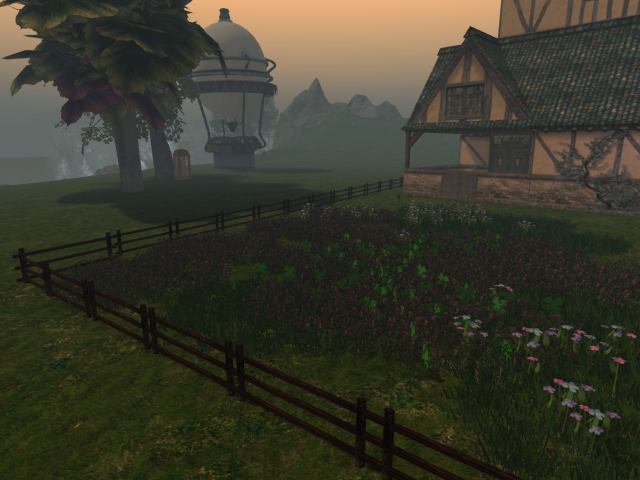 A Trip to the Moon, Around the World in 80 Days, Invasion of the Body Snatchers (1956 version), Jane Eyre, A Street Car Named Desire, Modern Times, City Lights, Silence of the Lambs, Cabaret, Journey to the Center of the Earth, Casablanca, The Time Machine, Twenty Thousand Leagues Under the Sea, Rocky Horror Picture Show, To Kill a Mockingbird, The Great Escape, Double Indemnity, The Way We Were, Princess Bride, The Wizard of Oz, North by Northwest, Murder on the Orient Express, Harry Potter Series, Star Wars Series, The Name of the Rose,The Hobbitt, Narnia, Lord of the Rings, The Pillars of the Earth and the eclectic list continues...

The Name of the Rose, Foucaut's Pendulum, The Prague Cemetery, Lord of the Rings, Hobbitt, Anne of Green Gables, Cider House Rules, Son of the Circus, Ishmael, Jane Eyre, He, She and It, The Handmaids Tales, Lady Oracle, The Testaments, Beloved, Sula, The Poisonwood Bible, Grapes of Wrath, Old Man and the Sea, Anathem, D.O.D.O, Seveneves, Snowcrash, Despereaux (book, NOT movie), Tiger Rising, The Magician's Elephant, Holes, The TRUE story of the 3 little pigs by A.Wolf (a very important book in my library), East of Eden, Oryx and Crake, MaddAddam, The Year of the Flood,Woman on the Edge of Time, and this eclectic list goes on and on and on.

Ten great articles from WorldEmber 2022 and RiverFang's Resolutions for 2023!

This dish makes you tear up.

Lootbox Eve is a free-for-all of epic proportions in the Centralvest Zone of Luridity. But that's what happens when you put a bunch of wrapped gifts in an open market, tell people they're free and that everyone should ready, set...GO GET THOSE PRESENTS!

One of the four sapient species of Etrea, shapeshifters are distinguished by their ability to change into another form.

A lexicon of common terms and esoteric slang alike for the world of Shedim.

Arcane Geysers are an oddity of the world, one strictly found in the Cradle of Clay. These geysers release a cloud of special dust which is concentrated magical energy transformed into a material that can be harvested once it is released from the world.

The Troll on Porridge Island

An ancient device from a civilized time. Built by the mysterious Choni Techaugers, it allowed communication or viewing across stellar distances.