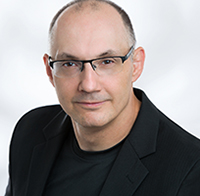 The Sacred Trinity Of the Necroliberatas

Death as the Undead

A long-held belief of necromancy posits that death and life are not binary states, but rather a smooth and permeable continuum along which many beings can wander.

Denis Dyack is the CEO Apocalypse. Currently working on Deadhaus Sonata.   A video game industry veteran of more than 25 years, he founded Silicon Knights in 1992 creating titles such as Blood Omen: Legacy of Kain, Eternal Darkness: Sanity’s Requiem, Metal Gear Solid: Twin Snakes, and Too Human. Denis is responsible for the direction of the brands across all mediums.   In 2011, Denis was inducted into the Canadian Game Developers Hall of Fame. Denis was awarded the Outstanding Achievement in Character or Story Development by Academy of Interactive Arts & Sciences for his work on Eternal Darkness. Denis is known for his unique approaches and understanding of the video game medium and has garnered multiple industries and business awards.   Denis is moved by the positive potential of converging media forms and is inspired to creating content that is original, challenging and engaging. Denis is a firm believer in ties between academia and industry and has consulted or been on several advisory boards such as MIT, University of Waterloo, Wilfred Laurier University, Brock University, McMaster University, and others to work in this regard. He has spoken on a variety of provocative topics from Engagement Theory, One Console Future, to Cloud Computing at conferences such as GDC, GDC Europe, Games Con, and DIG.   Denis has a B. Physical Education, H. BSc in Computer Science, M. Sc in Computer Science. Denis recently graduated from Miskatonic University with full honours in Quantum Theory believing one can never be educated enough to deal with the unknown.