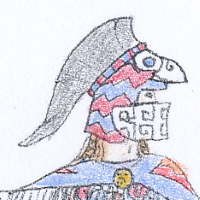 I've been worldbuilding via drawings and writing for fun since I was a kid, but only began doing so in an organized manner little over a decade ago.
Much of my work is based on notes in my native tongue, Icelandic, and I generally try not to deviate too much from the original names for different species, cultures, regions etc. when anglicizing them here, which includes preserving some of the Icleandic letters.
The original names are usually found in the footnotes; for pronunciation guide, check this out.

The Sims- Elder Scrolls- and Civilization series, Spyro the Dragon, Assassin's Creed: Origins, Titan Quest, Zeus: Master of Olympus, Dawn of Man, lots of adventure games (even though I'm terrible at them) and many others.