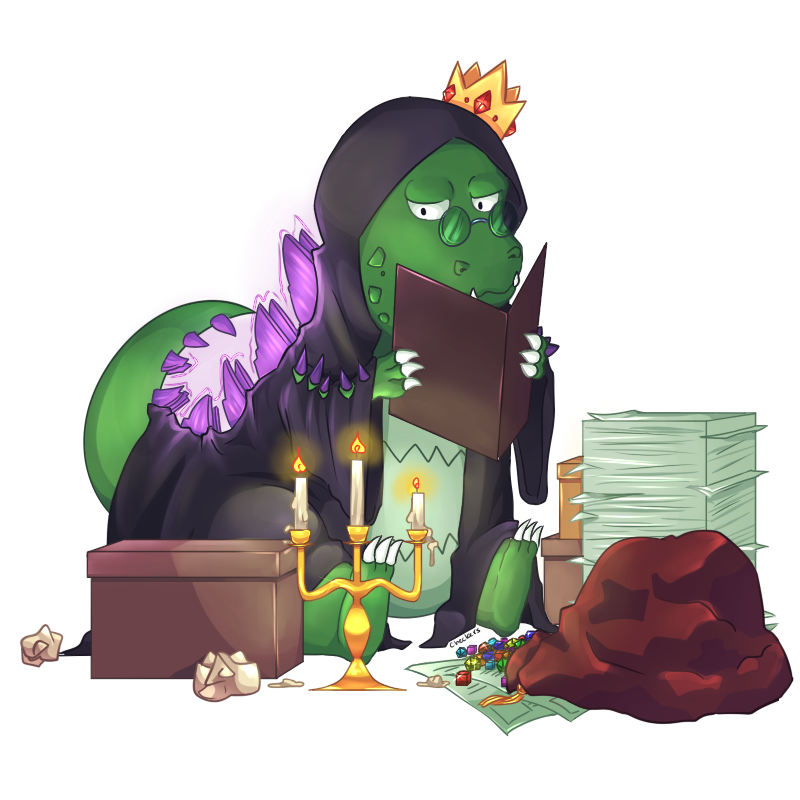 The Magman always made the party nervous.

Q:Can you tell me about the name Kojin? Why did you pick it?

Kaiju Kojin: So, as one of the few audible kaiju, I quickly adapted to human speach. This researcher... was facinated with my aptitude, and spoke to me daily, often giving me books to read and discussing Kaiju culture in exchange for human culture.   In one of his books, I came across stories about the various yokai and gods of japan, and the idea of the Kojin struck me. The god of the hearth... Now, the legend says that the Kojin is just as powerfull if not more powerfull than all the Kami's of the land... but he doesn't see any sense in violence or destruction.   He wants to be used to cook food, and boil water, smelt iron into tools that help humans tame the wild. The kojin is in the flames of innovation, the fire of survival, and the coals of the hearth.   I felt something in my heart ring after I read about this prometheus, and my friend said I shoudl take it's name, since he could think of no better Kaiju to hold it.   I hope to keep true to the namesake I've been bestoed. Hold myself humbly, while I try my best to present quality content. I look forward to meeting and working with everyone!   Have a wonderful time, and Kaiju on!

I was released from Monster Island after a virus created by the Xillians infected humanity.   It drianed many resources and funds that were ment to keep the Kaiju Research Institute on Monster Island operational. After many years of bridging the gap between Humans and Kaiju the experement was over, and everyone was let go.   As many went their separate ways and further destruction... I was more fascinated with the humans and the things they make. When I was employed there... I was the Human/Kaiju Liason.   (I say employ, because for my services, the humans would give me things for my hoard.)   I made a lot fo friends, and fell in love on monster island. One last thing I was asked to do was hatch an unknown Kaiju Egg with my Kaiju Waifu as we settled down in the moutains of the NorthWest.   Having found a cave close to a city, I worked out an agreement with the mayor that they would closed off traffic and clear a path for me to shop at the stores.   Here's Kaiju Secret #1
We kaiju can change our size at will. Minilla isn't the only Kaiju who can do it.. we all can.

One thing about that is our default size is really based on how much radiation we've abosrbed... but we can control our density to grow and shrink at will.

But, the smaller I shrink, the harder it is for me to stay shrunk... it's like holding in a snease, or not scratching an itch...

So, shopping at stores can be a challenge if I get overly eager wtih things, or I stay inside and read too long.

The Kaiju Research Institute has given the Kaiju helper drones based on the Jager series of robots my good buddy Godzilla faught.   It's part of the Kojin Rehabilition Act, where the Kaiju Institute will monitor the Kaiju as they try to assimilate into normal society and try not to distrupt human activities.   We get bonus points if we can actually figure out a way to work with them, so I'm hoping by doing this channel, I can make some interesting friends and expand my horisons to show the world that not all Kaiju are terrors that stomp in the night...

My interests vary from coin collecting to restorations. I'm interested in archiving and protecting history for future generations. I am a firm believer of understanding the past and learning from it.

Kaiju and Sentai series, both subs and dubs.

I also like a lot of older 80's swords and sorcery films.

One of my favorite as a child was called "The DungeonMaster" (or Ragewar).

Sword of Shannara series, Xanth, anything by Christopher Moore,

The primer and introduction to the world of Lyra.

An in depth overview of the variable feature and its use cases.

A list of help and connections - our github, help for what to do after you reach affiliate, etc.

Applying to the ASC

Click to read the ASC Network Code, see the requirements, and learn how to apply!

The Hesi Blues is what the people of Upēsis call the murder of Kt. Ulums, a soldier who had been the sole survivor of a dangerous expedition.

An animated series that accompanies the written story of the same name.

A mischievous yet adorable creature with an insatiable appetite for sushi.