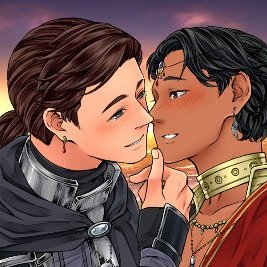 The Gread Covered Market of Al'soukarh

I just like to write the shit that pops into my head. That shit is pretty interesting to me, so i hope ii'll interest you as well. I will link the story on Wattpad when it'll be published.   I am not a native english speaker and i excuse myslef for any typos or anything like that, my computer is not set to english and can't tell me if what i wrote is correct english. I'm very sorry!!   Following this statement, I'm in need of a beta reader for my Wattapd page!

I love horse riding and i'm actually now riding professionaly. I've always loved music and things like cosplay (probably as a part of make believe). I'm a big fan of DND even if i have not have the occation to play until recently.

I love the MCU, but my movie crush is defenitly LOTR.

Euphoria is a good one, as well as Gentlemen Jack. I liked His Dark Materials a lot, but not as much as the others. I'm very interested in trying The Witcher and Peaky Blinders.

Most of the books by Tolkien, including some like Hurin's Childrens and whatnot, but also anything by the authors i've listed.

Probably Tolkien as I said, but of course i also have some less known ones such as: Christelle Dabos, Pierre Bottero, Lucie Pierrat-Pajot and Jhon Flanagan.

Probably the Zelda series, but mainly because i've only been able to play it. I've also loved Dragon's Quest : Firmament Sentinels, if anyone remembers wich one i'm talking about.