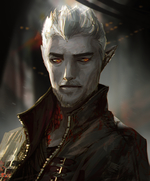 Hey there! I'm a geeky person from NYC and grew up playing RPGs, JRPGs, and adventure games. I had a big imagination and would come up with long running stories and built small towns and worlds with Legos. All this, along with a love of fantasy and sci-fi movies, turned into me wanting to write and build more in depth worlds with lore. Once I started playing D&D 5e (I didn't have any interested friends to play 3.5e when I was younger *sad face*) I realized that running campaigns was a fun way to world build while doing what I love most when creating; collaborating!   I have a published one-shot comic in Titan's Lost In Space Anthology which I co-wrote with my best friend.

Playing Music, looking at the sky, walking through nature.

The Fifth Element, Lord of The Rings (all of them), Star Wars (all of them but Empire is my go to), bunch of Disney and Studio Ghibli movies and others I don't remember off the top of my head.

FLCL, Rising of the Shield Hero, Is It Wrong To Try To Pick Up Girls In A Dungeon?, RE:Zero, Konosuba, various other anime, Another Life, Game of Thrones, Vikings, Jane the Virgin, Terrace House

Fallharbor's most liked by others articles.

The self proclaimed high elves of Nalamiir.

Fallharbor's most viewed by others articles

Goddess of the Forest

Badges and honorary awards Fallharbor has won by taking part in community challenges and other events.