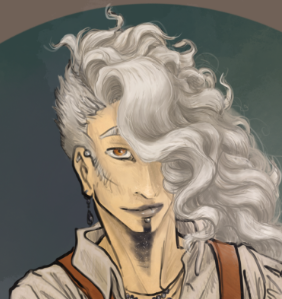 Alexej is a self-taught artist and storyteller with a faible for the macabre. He has a strong fondness of religious and historic mythology which is probably why he went to acquire an academic background in literature & media.    As a millennial who lived through the technological revolution, adapting new media at an early age, he’s been a gamer his whole life and combined with his fondness for gothic aesthetic and literature that lead to his early obsession with nerd culture. Role playing games, video games, trading card games, 90s cartoons, comics and manga all equally play a role as influential obsessions in his life.   Alexej has been writing his own games since 2001, was running a bi-weekly Vampire: The Masquerade LARP Domain for ten years, promoting his own games at conventions, drawing comics and writing novellas - just like anyone here, probably. He has now undertaken the task of bringing his biggest achievement to live, the Tabe Top RPG “Das  Ende Aller Dinge” (DEAD) together with his partner and his friends. And if you’re here for it, then that’s all that matters, really.   Well. An obsession for monsters, angels, demons, queer stuff and the dark places of the human soul sure help. But that’s just the icing on the cake, really.   Welcome to the show!

A hero of the Realm who sacrificed himself to save the world—and is now the most popular action figure in existence.

Goddess of Decay, Saint of the Zombie