For millennia the horselords of the Baiyurts threatened the western flatlands of what is today Juraedon and the southern countries of the Naharaim. In ages past, they dominated all nearby peoples with their chariots; and eventually they mastered the art of archery on horseback. They are fierce warriors, noisy singers, and divided into many competing tribes. They are most populous in the northern Zagros prairie, a narrow band of brown grass edging Uulsan Torall, and the central valleys and plains, which run lush and green in spring.

While the Baiyurts are an eclectic and spread bunch, they can be roughly split into two great races: the central Gedyurts and the northern Zagyurts.

The Gedyurts have long been the innovative force of the subcontinent. They have been the progenitors of all the great conquerors of the Baiyurts. Their fertile river valleys have made them a populous and powerful people. A Gedyurt is of great height, standing at about 5'10, and their women are often taller than the men. Their eyes are narrow and usually a bald, bold, chalk blue. The mightiest of their people are born with multiple pupils in their eyes, usually two. Emperor Aelmourne was born with two. Only the Tetians have been recorded as having a similar phenomenon. Gedyurt hair is black or brown. Faces are wide with high and wide cheekbones. The nose is narrow and projected with a broad base. Foreheads are large and sloped; the brows are large and shadow the eyes. Lips are narrow and teeth are fine. They are born very pale, almost white.

The Zagyurts have always been the more militant of the two groups, though they've fought each other more than they've conquered outsiders. They are masterful horse archers, and grim fighters. A Zagyurt is of great height, standing at about 5'9. Their eyes are oblique and narrow and usually a fair shade. Common colors are blue, green, and white. Zagyurt hair is fair, often flaxen colored or a light shade of brown. Faces are wide with sharp cheekbones. The nose is narrow and projected with a slight curve. Foreheads are large and sloped; the brows are large though not as projected as those of the Gedyurts. Lips are narrow and teeth are fine, though they have an extra tooth between their bottom and upper central incisors. They are born fair-skinned, with a more pinkish color. 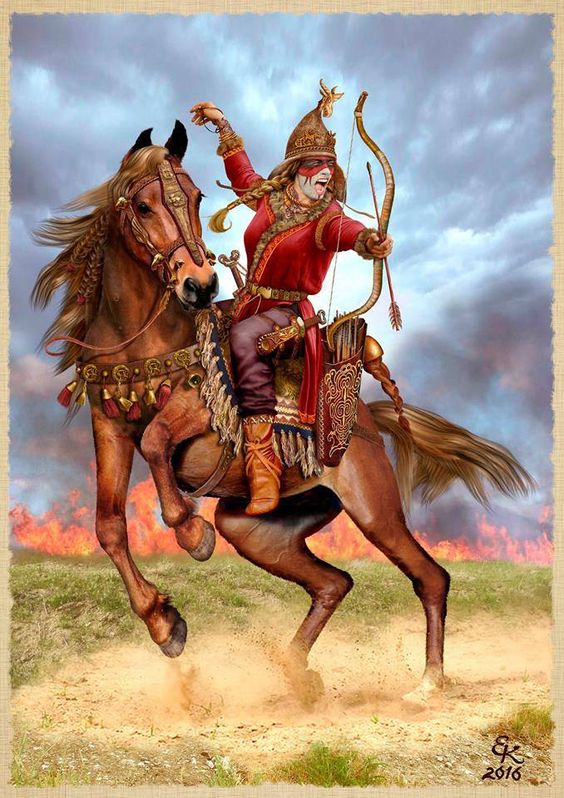 Size: Baiyurts, on average, are 5'9ft. tall. You are size Medium.

Born in the Saddle: The Baiyurts were raised to ride horses. Mounting or dismounting a creature costs you only 5 feet of movement, rather than half your speed. Furthermore, you may edge your mount to its limit. If you are mounted on a creature, you may use your action to double your mount's speed for up to one hour. This effect ends prematurely if you or your mount are separated or knocked prone. When the effect ends, your mount may only move a quarter of its speed for the rest of the day. Lastly, if you are mounted on a creature, you may add +2 to your ranged attack rolls.

Martial Training: You have proficiency with the shortbow, longbow, warhammer, and scimitar.

Sturdy Stock: You may ignore the effects of the first level of exhaustion.