Edited by James Field.
As seen in
Starseeds: Stories from the Toy Soldier Saga

When young elven Star-Pilot Shaundar Sunfall lies about his age to join the Avalonian Imperial Navy to fight his people's ancient enemy, the orcs, all he wants is a chance to prove himself.   He's going to get his chance. 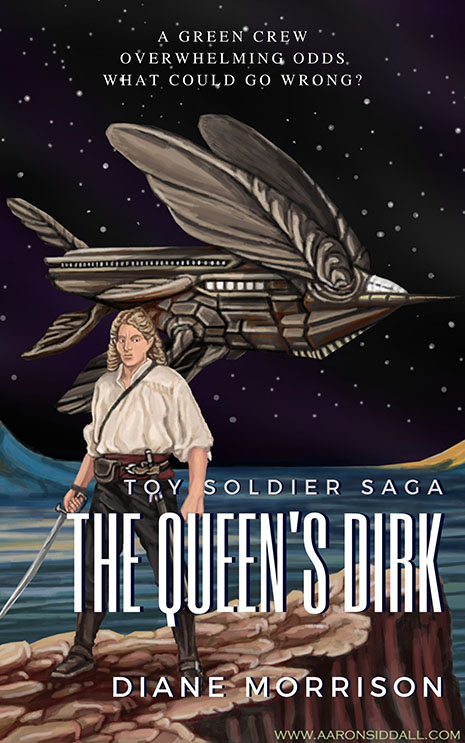 The Queen's Dirk Cover by Aaron Siddall (cover image,) Diane Morrison (cover design)
“Mail call!” the Quartermaster bellowed into the first helmsman’s quarters. “I have mail for Oakheart and Sunfall.”   “Thank you, Chief,” Shaundar replied. “I’ll take both.”   The Quartermaster piled a few letters on top of two brown paper wrapped packages and pressed them into Shaundar’s hands. “I do believe I recognize a certain girl’s handwriting on one of those.” He smiled as he continued down the passageway.   Narissa had sent something? Shaundar went through the letters and packages, placing his friend and shipmate Garan’s letters, and one of the boxes, directly on to his hammock, and sat down on his own. Garan was currently manning the helm, and there was no one else in the cabin.   Since his posting, he had been enjoying the relative luxury of simple privacy. Used to the crowded midshipmen’s berth for so long, they had almost too much room for all their things, and so their quarters had also become the place where the young officers met to play board games and card games, since they had the space.   The ship that housed those quarters, the Queen's Dirk, was currently on quarter watch, “at dock”— if you could dignify the arrangement which attached them to the station as being docked. For that matter, calling the hastily cobbled-together collection of derelict dreadnaughts a station was at most a courtesy. They were in the back of beyond here, at the far reaches of the solar system, circling the Sun in an orbit that was directly opposite his homeworld’s.   Still, mail had been waiting there for them. The Navy was a bit obsessive about mail; the Admiralty believed it was vital for morale. Shaundar could see that he had indeed received a letter from his betrothed Narissa Elkshorn, and one from his father, and the package was from his Mother and Grandmother.   He opened the letter from Narissa first.

Are you enjoying The Queen's Dirk? Subscribe to my Patreon for more Toy Soldier Saga fiction, available right here on WorldAnvil!

Articles under The Queen's Dirk

When the Avalonian Navy ship the Queen's Dirk investigates ship sightings in a planet's rings, they find more than they bargained for.

The battle is joined! The Queen's Dirk must survive combat with ten orc ships & escape to warn their homeworld.

Will the Queen's Dirk survive a battle against overwhelming odds? If it does, what price victory?

The conclusion of The Queen's Dirk.

~ Thank you for your support! ~
If you couldn't tell by the elves, orcs, and magic flying sailing ships in space, this is a work of fiction. Any resemblance to people or locations, living or historical, is purely coincidental, with the exception of Alberdingk Onestone, who may actually be an alternate dimension's version of a famous scientist, only as a gnome.
The Toy Soldier Saga is copyright (c) 1995 by Diane Morrison. All rights reserved.
Cover image: Toy Soldier Saga Part 1 by Aaron Siddall
Article template
Prose
World
Toy Soldier Saga
Category
Fiction
Author
SableAradia
Publication Date
4 Apr, 2020
Creation Date
8 Dec, 2019
Last Update Date
12 Aug, 2021
Visibility
Public
Views
1064
Favorites
9
Comments
0
Tags
fiction short-fiction novella The-Queen&039;s-Dirk Starseeds

Thanks for reading! Check out the rest of the story at the links above, and don't forget to subscribe for more Toy Soldier Saga fiction!