"You seemed more observant to me."
"What does that say about you then?" Eject replied deadpan.

Eject is usually broody and pensive. He is rarely seen smiling, despite not being in a bad mood by default. Even though he can be curt with strangers or when disgruntled, he isn't a rude or unfriendly tank.   Holds strong opinions and isn't afraid of voicing them, even unprompted. Not everyone appreciates this. It's difficult to change his mind once it's made up, which gave him the reputation of a stubborn, but consequent person. That doesn't mean he won't make compromises - he just does so very reluctantly. And should it turn out he was in the right about something all along, don't worry about repeating the mistake; he will make sure you won't forget about it.   There are few things that make him lose his cool; if he actually becomes anxious, whatever is happening is really bad news.

A bit worn armour, but generally in a good condition (as good as it can be in any case).

Wears a shovel on his rear for good luck.

Has seen many battles in his life. He was one of the founding members of the Falkendorf Team. Not much is known about his past otherwise. May be from the East. Some say that he used to be an SPG before the Purge, but he doesn't talk about this matter unless caught off-guard.

Greatly troubled by memories of the Purge.

Generally gets along with others, although he isn't very popular.

He isn't particularly taciturn - apart from the occasional one-liner, he tends to talk in run-on sentences, which are usually delivered in a matter-of-fact tone. 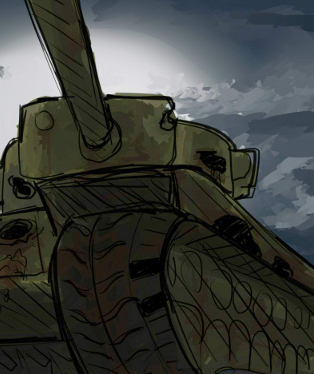 The Hummelverse and The Tanking League are my creation. All content - including art - on this page was created by me, unless otherwise stated.
Want to submit content like fanworks, ideas, characters? Please note that you are accepting these terms if you do.
Back to top
Article template
Character
World
The Hummelverse
Category
Main Stories in Characters
Author
arty
Publication Date
5 Jan, 2020
Creation Date
20 Feb, 2018
Last Update Date
25 Jul, 2020
Visibility
Public
Views
774
Favorites
2
Comments
0
Work In Progress
Tags
tanking-league falkendorf-team