“Well,” Eohelm said, tilting his cannon. “One thing he sure taught you already is how to sound like him.”

A low tier SPG who just wants to belong for once. She was given the nickname Arty and just stuck with it, even when she learned the reasons why there are many other SPGs who strongly dislike it. In her short life, she has experienced a pretty typical artillery career; while her teams tolerated her, she was treated more like an asset than an equal. This changed when she met Sky and joined her team, but the past and a still hostile world have shaped her.

To this day, she has little trust in her own abilities - she usually chalks achievements up to pure luck or anyone else who played even a minor role in them. She doesn't take any help for granted - while she is used to her teammates saving her when she's in trouble, it made her fear the day this won't be the case. After all, she is convinced that on her own, she's useless.

Through necessity, she is therefore the definition of a teamplayer. She'll do what she can to help her teammates and always has a greater good in mind. This loyalty ends when her own wellbeing is concerned, though.

It is not openly spoken about in the Tanking League, but one can safely assume that everyone knows why she was kicked from her old team. She will claim frantically that it was a tragic accident, but how much of an accident aiming a cannon straight at a teammate and pulling the trigger really can be is never explained by her.

She joined a team of strangers at the factory. For quite a while she traveled with them. She was underperforming in the battles however and changed class to artillery, which suited her better. When they were defeated in a fight, she was forced to join the winners, where she wasn't received warmly. After being bullied for a long time by two of her team mates, she killed one of them by accident and got kicked as a team killer. She strayed around aimlessly but then met Sky and joined her newly founded team. She has been with the Tanking League since.

Eject is training her to become a better SPG. 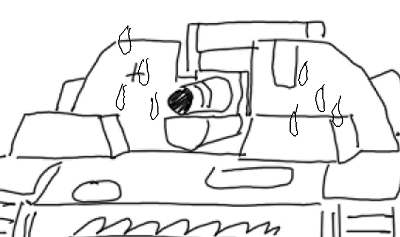 The Hummelverse and The Tanking League are my creation. All content - including art - on this page was created by me, unless otherwise stated.
Want to submit content like fanworks, ideas, characters? Please note that you are accepting these terms if you do.
Cover image: by DrEisenhauer28