When you're looking for a way across the mighty seas, the Handsome Garpike and its crew might be one of the safest ways of travel. This fine vessel sails from harbor to harbor, taking payment from passengers and transporting valuable luxury goods from faraway places. The ship can often be found in the harbors of the captain's homeland of Wolfsbrunn.

The Handsome Garpike is a sleek and slender looking ship. It has a slightly raised stern and prominent elongated bowsprit. On the sides of the bow are painted two fish eyes. All of the wood on the ship has a silvery grey colour that shimmers like the scales of a fish in the light of the sun. The three masts on the ship feature fore-and-aft rigged dark grey sails with a light grey garpike crest painted on them. The Handsome Garpike is not in direct service of the Kingdom of Wolfsbrunn but flies its flag on the main mast and flagpole on the stern of the ship to denote it's allegiance and homeland. 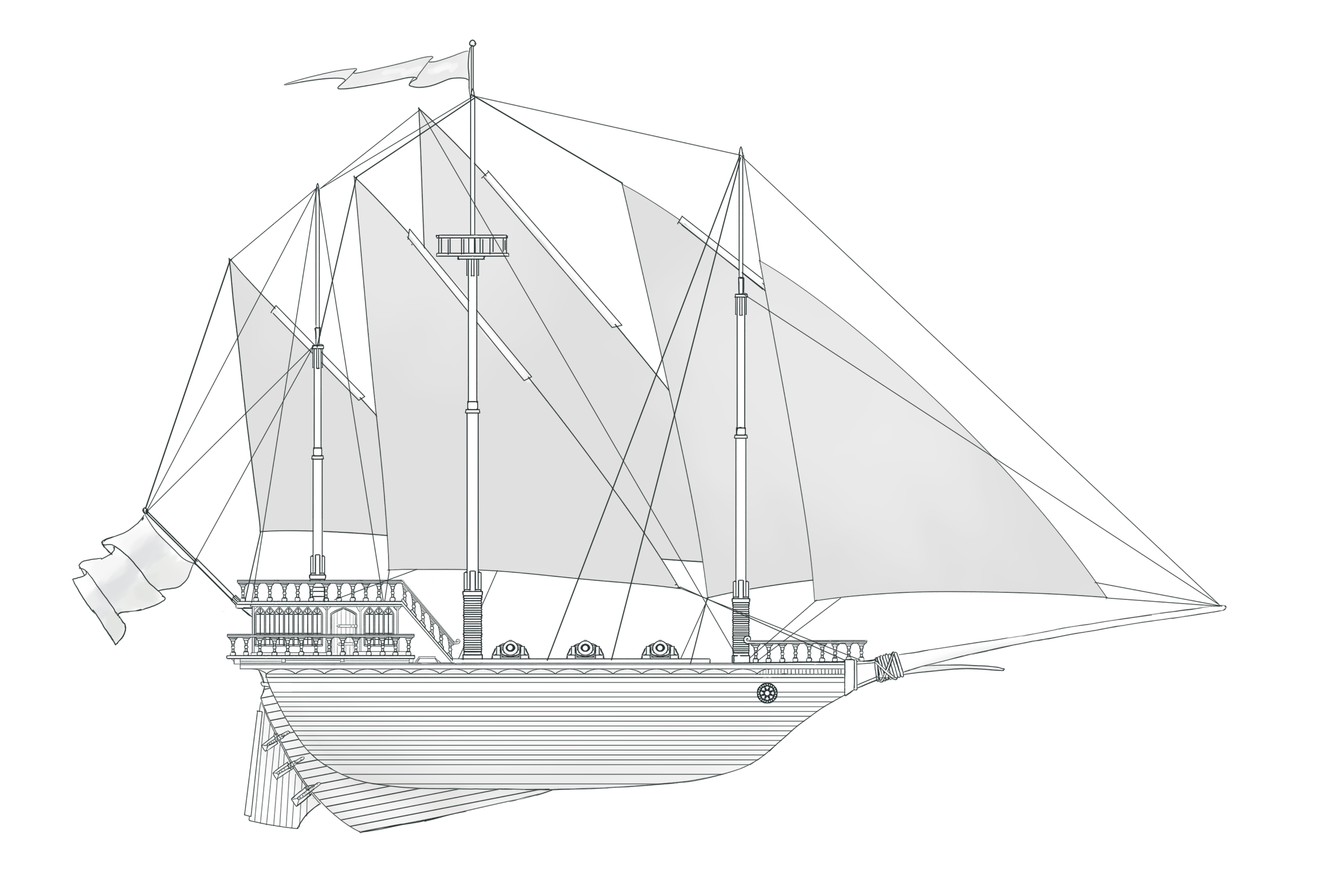 On the main deck of the Handsome Garpike stand six cannons, three on each side. The ship is often very organized as the rigging, ropes and chains of the Handsome Garpike have all been enchanted to respond to commands to tidy, tie, tighten or loosen themselves while they are attached to the ship. This also makes it easier to sail the Handsome Garpike with a relatively small crew. The captains quarters in the stern are accessed through a two large doors that feature a carving of the crest of Stor. The captains quarters are furnished with silver lamps, a dining table, a desk and a large bed. It also features a Seafarer’s Map Table and a few small bookshelves on which books about life at sea and maps of the world can be found.

The middle deck of the ship features the cabins for the crew and passengers. The passengers have a slightly better accommodation than the crew, with bunk beds in separate rooms. The crew sleeps in hammocks in the main room located in the bow of the ship. The ships galley and pantry can also be found on the middle deck.

The lower deck of the ship features a few more hammocks for the crew to sleep in but is mainly used as a cargo hold. The hold is often (partially) filled with luxurious goods from faraway places. The Handsome Garpike transports items like spirits, antiques, fine furniture, jewelry and expensive garments. The ship relies on its speed, so the quality and price of the items are more important than the quantity. The entrance to this hold is locked and not accessible to passengers. There are only two keys, the bosun and the captain both hold one of them on their person.

There is a small crew of approximately 20 people aboard the ship. They are all honest, hardworking people just trying to make a living, the captain respects the crew and vice versa. Each crewmember has a dagger and sword to protect themselves from any dangerous creatures or individuals which may come aboard the ship during their travels. These weapons are stored in racks near the staircase on the middle deck to the main deck while the crew is resting.

Cutting through the cobalt sea,
Fast and nimble, quick and free,
Not bound to reality,
The garpike is a sight to see.
— Verse from a shanty

Built in the year 6701AV, the Handsome Garpike was originally named The Fancy Fox, and was intended as a means to travel the world for a nobleman from Stor. When the man had seen and visited all the places he wanted to in life, the ship came to rest back in the harbor of Stor. Shortly after returning it was swiftly auctioned off to Lennard Overton, who has captained the ship for the last decade. The ship is quite nimble and fast and because of this has often evaded danger at sea.   One time the ship accidentally sailed into a storm where the vessel was pulled into a portal that led to a different plane of existence. It is unknown how long the ship drifted in this plane, as the captain believed that time progressed differently there. Ethereal creatures attacked the crew and unseen forces tried to tear the hull to shreds, but in the end both the captain and crew all made it out alive. When the ship found its way back to the material plane, the wood of the ship had turned to its now famous silvery appearance. It was at this point that the ship was renamed to The Handsome Garpike. There are tall tales and rumors that speak of The Handsome Garpike having the ability of extraplanar travel, or having luck beyond measure, but there's no real evidence of this.
Nickname
The Pretty Needle
Beam
7.5m (25ft.)
Length
40m (130ft.)
Height
35m (115ft.)
Speed
10 Knots
Cargo & Passenger Capacity
200m3 (7000ft3) cargo space
18 passengers
Hull
Silvery White
Sails
Grey
Crest
Silver Garpike
Captain
Lennard Overton
Bosun
Elric Sternberg
Related Articles
Murder aboard the Handsome Garpike 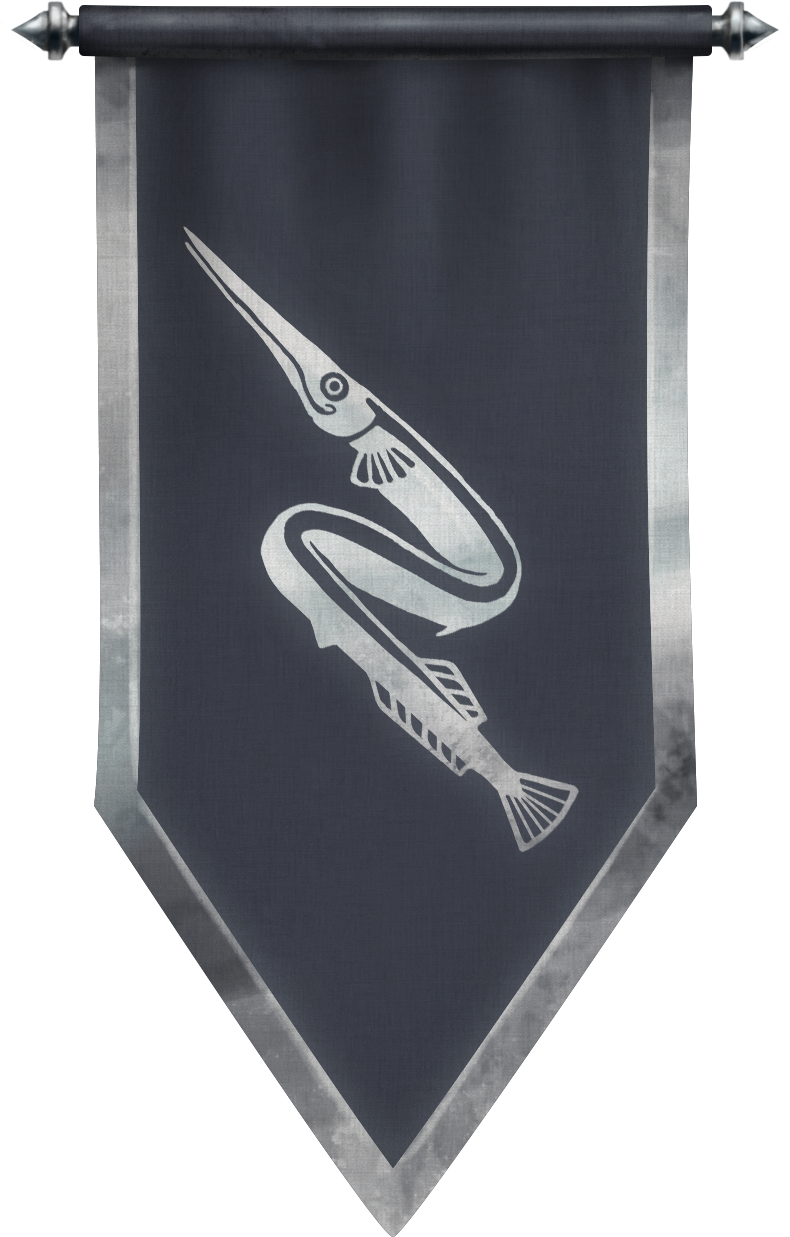 The Handsome Garpike
Open full size
Made with DungeonDraft
Technology

Thanks! this was way more fun than I expected, definitely excited to start writing about the one-shot adventure aboard this ship :)!

It's nice to see that the captain respects the crew, don't see that too often. And I'm also surprised that passengers get better accomodations than the crew. Nonetheless, fantastic article, I am obsessed with the flag and the map ^-^

I know right? Not every ship has constant mutiny! They went through a lot together in that other dimensional plane, so i figured they're probably pretty close. For the accommodations I took inspiration from the real world, where crew quarters are usually worse/smaller than passenger quarters (on ferries, yachts and cruise ships for example).

Oh my gosh I ship this! This is awesome!

Nice ship, I love the design of the flag and the how the sails on the map makes a shape similar to a fish, this is very cool :D What type of people would travel as passengers, rich people like it transport luxury goods, or would it be more affordable? I'd imagine people would prefer to travel on this ship rather than another one because of its cool history :D

Great article overall, and I especially like the different bits of art we get to see from you here: map, banner, sideview. Really well done.

Just so you know, you call the ship The Handsome Garfish in several places. I assume that's not an alternate name?   Beautiful art - I particularly love the flag! I love all of the detail you have in the make up of the ship, especially the enchanted ropes. I love the sea shanty as well - that's a fun little addition.   Great job! :D

Ooh thanks Emily! I edited that, it was not intended, but the original name i gave it, Luckily, the fish it represents has two names, garfish and garpike, I just liked the sound of garpike better :P :)

Garpike definitely has a bit more gravitas to it, I think. :D