Paldurog      Titan Fox
The Titan Fox is the personal airship of Aymer Eilrie. It is a custom-built airship, built by Conzania.

This ship was commissioned by Aymer Eilrie in 1728 and has been in his possession ever since.
In 1733 during a trip from Rivenglow to Featherby, the ship got raided by Wyndam Shaw. While no lives were lost, Wyndam was able to steal the gold that was being shipped. Reportedly, it was a quarter of a million in gold. It was the last job Wyndam did before retirement.

In 1751 it got a refit, replacing the engine, adding more windows and redoing the kitchen. In 1768, the engine was again replaced and the internal wood was refurbished. The last changes were done in 1790 when the engine was tweaked, the outside wood was replaced to make it waterproof and a rudder was added so it could land and sail the seas.

When Aymer Eilrie has to travel abroad, he uses the Titan Fox. Since he has a pilot's license, he usually assumes command of the ship. There are also other qualified pilots on board. They take care of flying if/when Aymer wants to do something else.

The Titan Fox is a high-speed yacht that flies through the air.

In 1790, the option was added to land in the water and proceed as a boat. When in the water, the engines cannot be used. The sails get moved into a more vertical position so that the ship can sail away.

The top deck has a luxurious captain's quarters and the cockpit. In the cockpit, the sails' angle can be adjusted as well as the rotation and speed of both propellers.

Both the cockpit and the captain's quarters are unusually large for a ship this size. That was a design choice of Elrie himself.

On the middle deck, there are 4 personal cabins, 2 bathrooms, a common room, the staff room and, at the front, there's a second common room with windows to look outside.

At the lower deck, there is a cargo bay with an entrance for loading/unloading cargo. Behind the first door, there is the aserion room and beyond that, there's the kitchen.

In the cargo bay, 8 class IX emperor type cannons are ready to fight back in the case of an attack.
The cannons have to be manned by one person per cannon. The user of the cannon can either channel their own magic through the cannon or use one of the infused spells. The infused spells are: 5th level Flame Strike at the target or 3rd level Lightning Bolt.
Infused spells draw energy from the Magic Storage Crystal.

Weapons of the crew are stored in the crew's quarters. The captain has his own weapon storage in his captain's quarters.

Power onboard is generated through 2 aserions that also provides propulsion for the ship.

A ship core in the bottom of the ship lowers the weight of the ship up to 0, allowing it to sail through the air. For extra speed, aserions are placed in the engine room. These aserions power propellers on both side, which can rotate 180 degrees to brake or even go backwards.

The Titan Fox is probably the most expensive ship ever built.
— Dimitri Dalby, president of Conzania 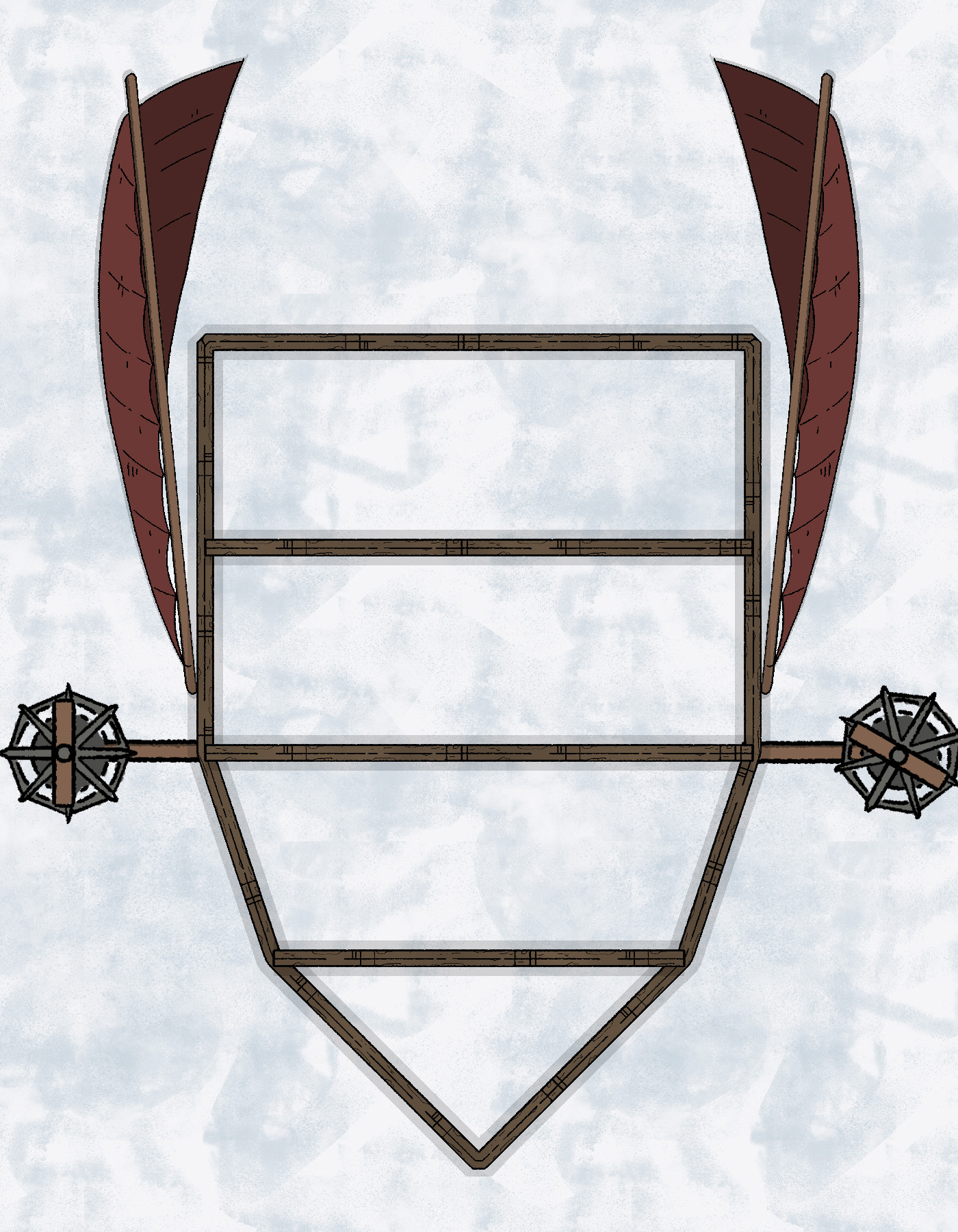 Already a nice looking map :) How does it actually stay in the air?

It's a fair question and something I still need to work on. In my mind there's a magical core in the bottom of the ship to lower the ship's weight. The ship is propulsed by either propellors or sails. In this case, it would be both. The sails are there mostly cosmetically, although they could function if the engines run out of fuel. The propellors would do the normal propulsion. Interesting thing to figure out. Thanks!

Glad I could help :) Yes that magical core would be a nice idea! Perhaps the sails could help with steering, that is also a possibilty.

Thanks for the question, I've added it :)

Nice article! I love the mix of late 18th/early 19th century technology with airships, and the different magics you used to allow for that :D   I don't think you mention how many people are needed to fly the ship, besides 8 people being needed to man the cannons. I'd think it would not be that many people since the ship design seems to be simpler than sailing ships, but you do have a lot of bed for the crew. Would almost of them, take care of the sails, or do the engine need a lot of attention?

Interesting questions. The only things that really need to be done are steering the ship and refueling the engines. So technically, you'd only need 2 people to effectively run the ship, but you'd want to do it in shifts. Since this is a luxury ship, part of the crew is there to take care of the guests.   The bare minimum to fly the ship would be 1 person, the pilot. They could either land and refuel, lock helms and refuel or continue on with sails only if the fuel runs out.   Based on all of that, for a simple flight during the day, there'd be 8 staff on board, for multi-day travel with shifts, around 12 people (3 pilots, 8 general staff to help around and serve the guests and 1 graveyard shift general staff). They can still scale this up to 14 people.

To follow up on kefkejaco's comment, does it only land on water, or are there cradles for it to land on? Just looking at the cross section (nice inclusion by the way) and realizing that the bottom would make it awkward to land on land.

Good question! Ships are designed to dock at a docking station. This can be a mooring (or docking) mast on top of a building or a dedicated building which has multiple mooring/docking spots. I have clarified that the ship's core can lower the weight up to 0 or all the way to the original weight.   The ship is moored/docked, like a normal ship, so that it doesn't float away.