Jiy celebrates an ancient rite during End Year 1:39-40. Called Fools and Ghoul's Day in modern parlance, the holiday stems from the ancient Blood Harvest, a rite of passage conducted during the blood-red moon days during the last harvest and before the first snows. 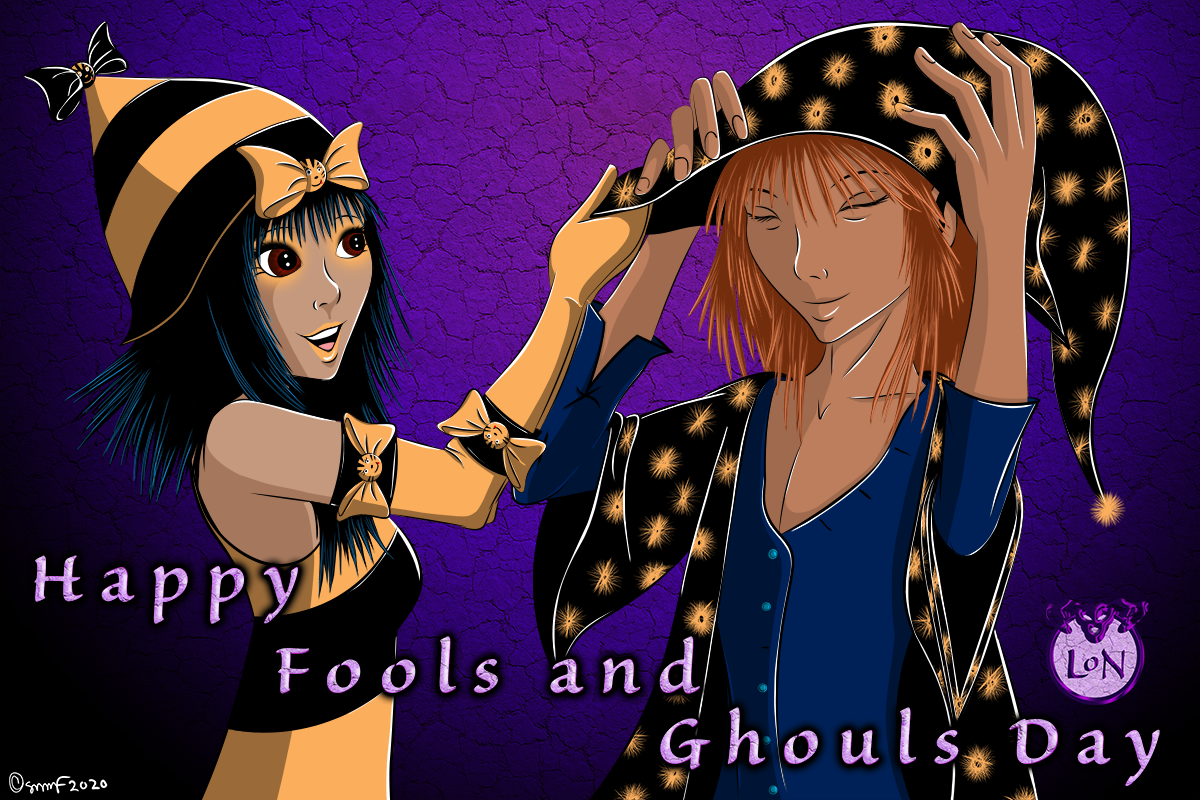 All images by Shanda Nelson unless otherwise stated.

The Blood Harvest
The Blood Harvest was a badly knit conglomerate of traditions passed down from the Jils, the Rams, the Albas, and other ancient Theyndora peoples of the west. Most dealt with teens swearing blood oaths to their kin and kith. The sacrificed blood pooled in a communal bowl and the high priest collected it at midnight, formed a procession of acolytes, and poured the solidifying liquid onto a sacred object representing their deity, be it a rock, a hill, a meadow, or a sculpture.   The Jils of Jilvayna celebrated Omerdewrane, a god of rage and vengeance, in this ceremony. The following day, they paid homage to his lover, Chewraineve, a gentle and resiliant goddess who convinced him to create rather than destroy. The pair represented the fire of a Mid Year sun dwindling into the cool embrace of a snow-covered night.   When the Taangis Empire reached western Theyndora thirteen hundred years ago, their religious leaders saw the rites and claimed them barbaric. They eradicated any who practiced them. The peoples reformed their sacred day, donning costumes to hide their identities as they continued with their practices in secret places. When Taangis divided the population centers and sent the peoples into other lands, the Blood Harvest celebrations became a way for the uprooted to hold onto their traditions.   The most important aspect of the celebrations were the costumes; no one wished to experience punishment for traditional beliefs. Masks were especially significant, and became the centerpieces of celebratory wear. After Taangis departed, the celebrations became more structured, and while the costumes and masks remained, the ancient rites all but disappeared from the festivities. The honor transformed into respecting the ancient dead ancestors who fought Taangis rule, rather than remaining a way for teens to swear allegiance to their communities. 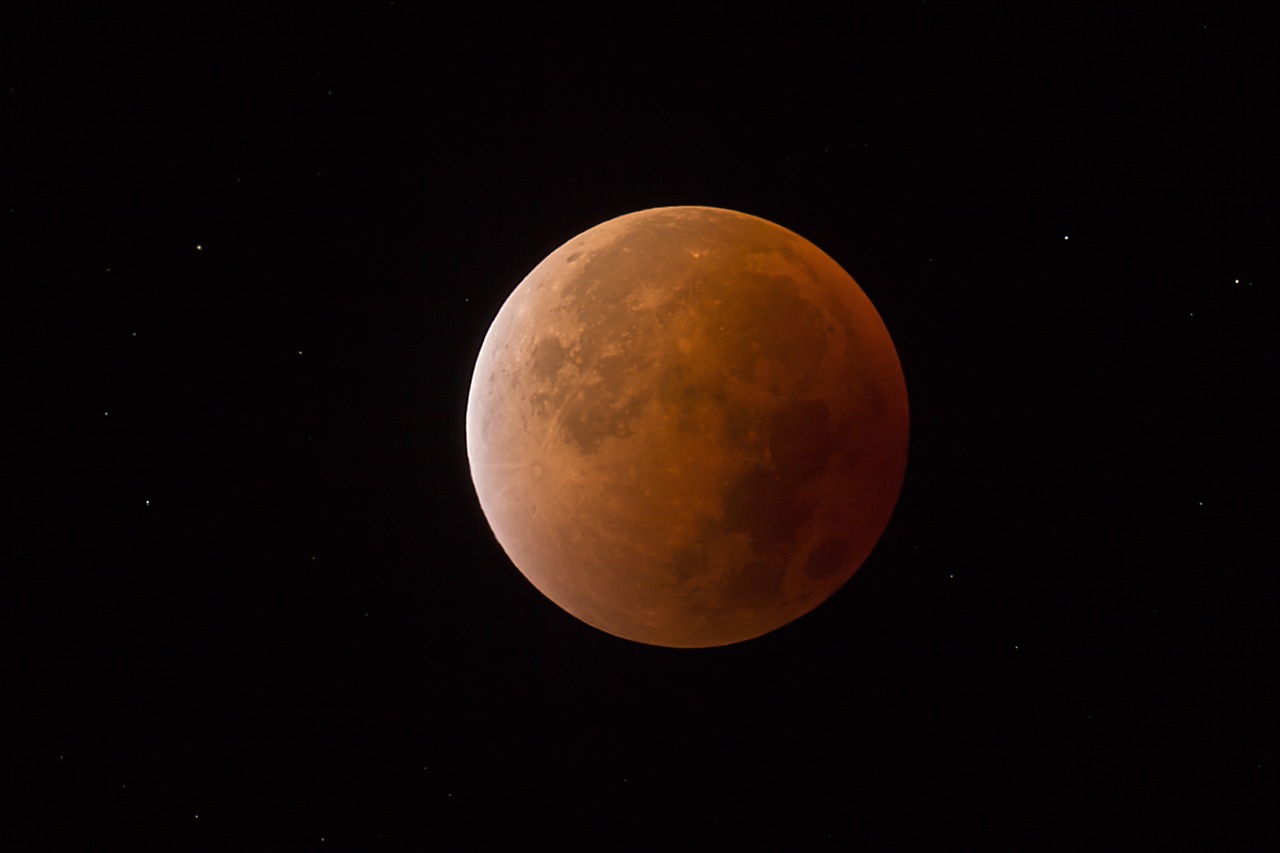 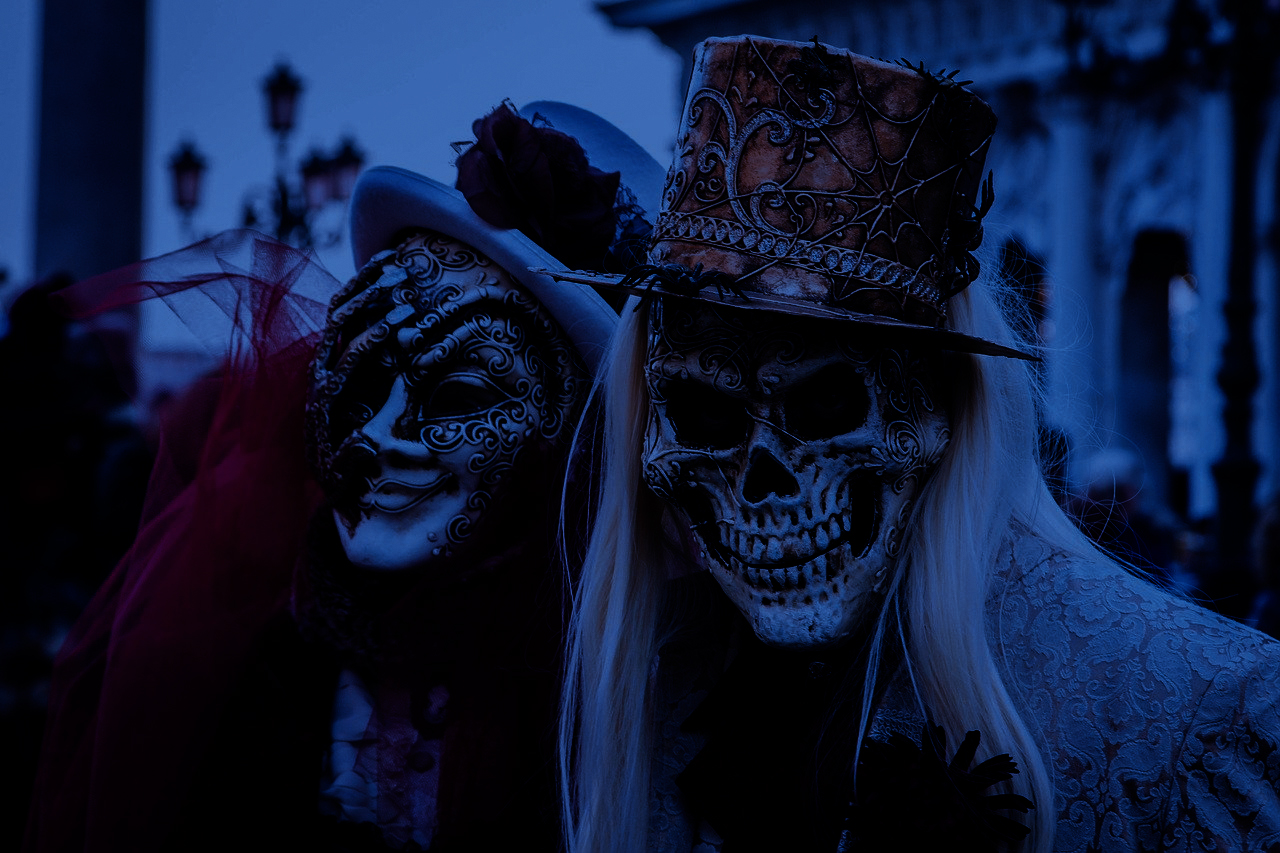 The Jilvayna celebrations are the descendent of the Jils practices, called Fools and Ghoul's Day. Frightening masks and costumes are donned to scare ghostly ancestors from their graves--in essence, "fooling" them. Once the ghosts vacate, gifts are presented to small, flower-decorated altars. The celebrators withdraw to other venues, allowing the ghosts to return and indulge in their gifts.   Private and public dances are the main way residents celebrate after the more somber religious experience, usually with a terrifying theme. During the night, pranks are played, mostly by children, because their disguises hide their identity and they believe (wrongly) that no one will know who to blame for the mischief.   The finale is the lighting of a large fire at midnight, where participants toss in their costumes and masks, ending the celebration. Depending on who threw the party, some celebrations end with religious leaders sweeping the ashes into containers and carting them to the same places the ancients saw as sacred, and upending them at those spots. The crown frowns on the practice, but has done nothing to stop it.
The Jiy celebrations differ drastically from those found in other Jilvayna communities, since it is illegal to bury the dead in the city. The corrupt court demands all bodies be fed to carrion lizards in The Pit, so there are no graves or tombs to visit with gifts. In-house rememberance altars are frowned upon, so most people follow religious lead and symbolically drive the spirits from houses of worship.   The wealthiest individuals pay the underground to bury their dead family members in ancient Taangis tombs. During Fools and Ghoul's Day, the families visit these burial places for a more traditional form of celebration--for a very hefty price.

The Lells
The Lells customers are normally too poor to pay to attend either the religious or the official celebrations that take place after the ritual scaring of ghosts. Several merchants have banned together in recent years, and pooled resources to purchase free food and drink for those who arrive at the shopping center in costume. The Grey and Stone Streets residents have an outdoor, communal celebration, partaking and gossiping, and usually buying a few wares. 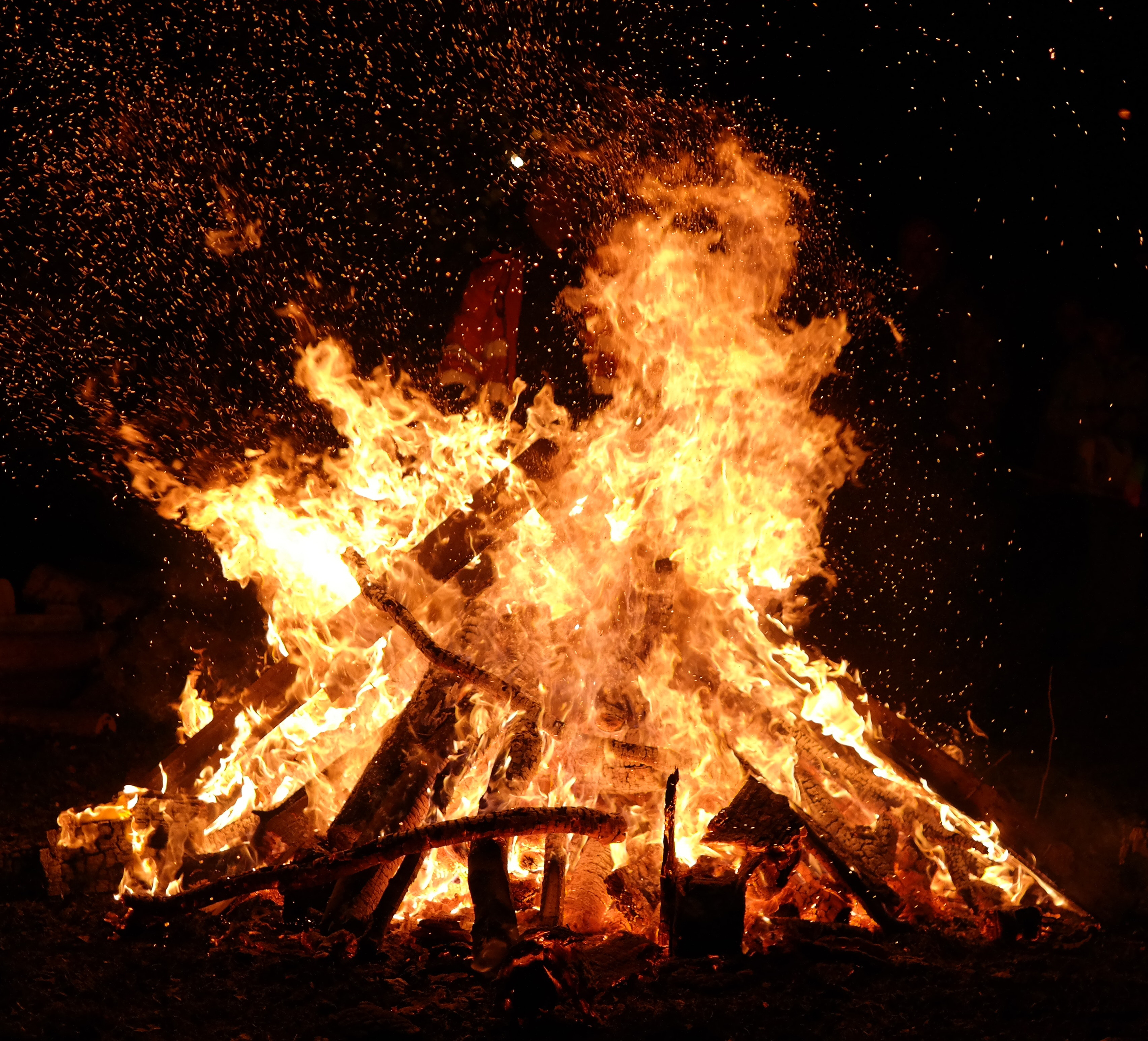 Jens Mahnke, Pexels
The finale happens when the moon is at its zenith; the Lells owners light a grand fire in the center of the largest square. Blood-red packets are handed to all participants and they randomly throw them into the fire. The packets erupt into bright, colored light when heated, and depending on how many are tossed in at once, the entire fire can turn a different color briefly.
At midnight, some Lells participants make a pilgrimage to the Pit, to honor the dead. Those who lost a loved one the previous year normally make the trip. Potpourri packets made from crushed wildflowers are thrown over the bridge and onto the bodies below.
Grey and Stone Streets residents tend to hold onto their costumes from year to year, and children share their outgrown ones with younger siblings.


When Lapis experienced her first Fools and Ghoul's Day in Jiy, she knew the street rats had no way to join in the official festivities, so bought paints and painted their faces. While not a mask, the paint served the same purpose. The rats were able to participate with their peers, and the celebration at the Lells became a lot more rambunctious and less strict in presentation. The main goal was to have fun, as as long as a child had a dab of paint on their cheek, they could receive treats from the vendors. 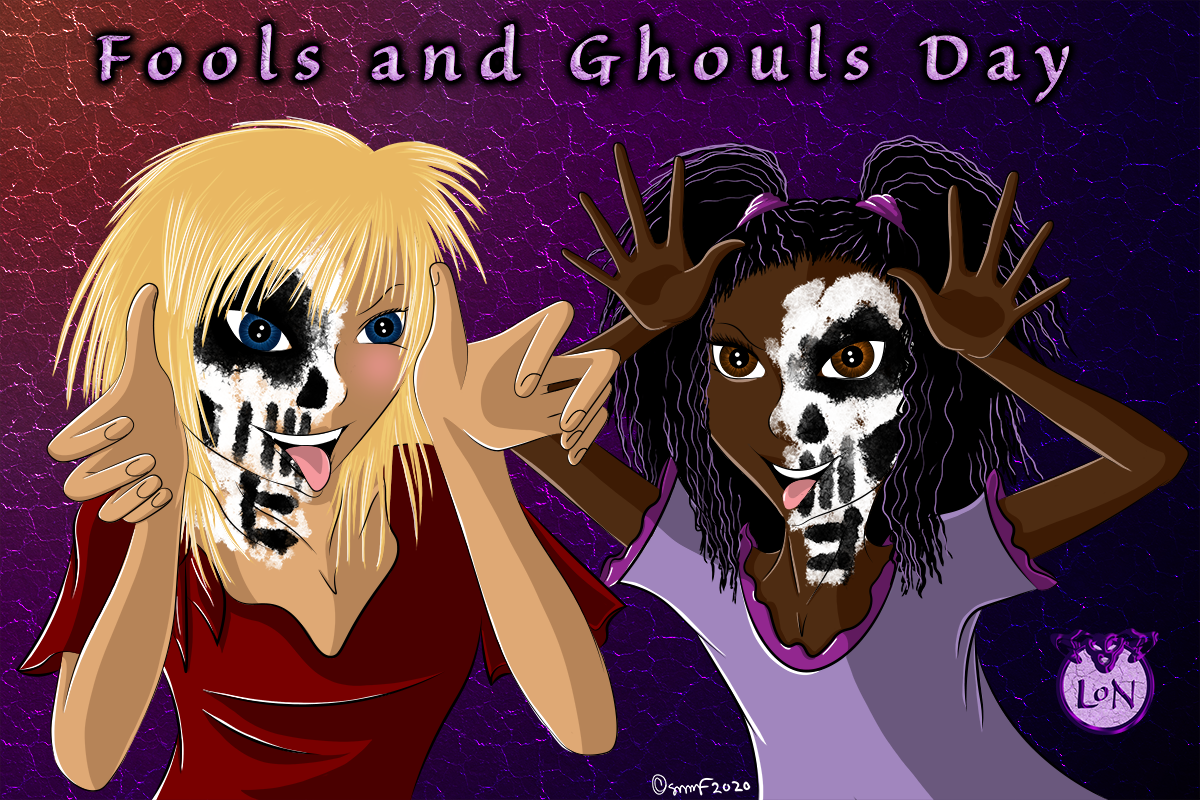 The Stone and Grey Streets celebrate Fools the following day, unlike other parts of Jiy, where thanks is given for creation. Brighter, jingly costumes are donned, face paint worn, tricks played, and soft pies given out at dusk that end up in the faces of friends. The Seven Gods and the Stars religion hates the mockery of their very sacred day, and the streets shrug and continue with the laughter.

Before Lapis, street rats were wary of the celebration. Masks hid identities, and too many Jiy residents used the anonymity to attack those they did not think could fight back. Rats were bruised, broken and even killed during the night.   Rin took it upon himself to fill a basket with small treats and visit cubbies, giving those that hid a chance get something sweet. While the rats are currently more apt to openly participate, Rin still dons the wizard outfit Lapis gifted him and hands out treats. 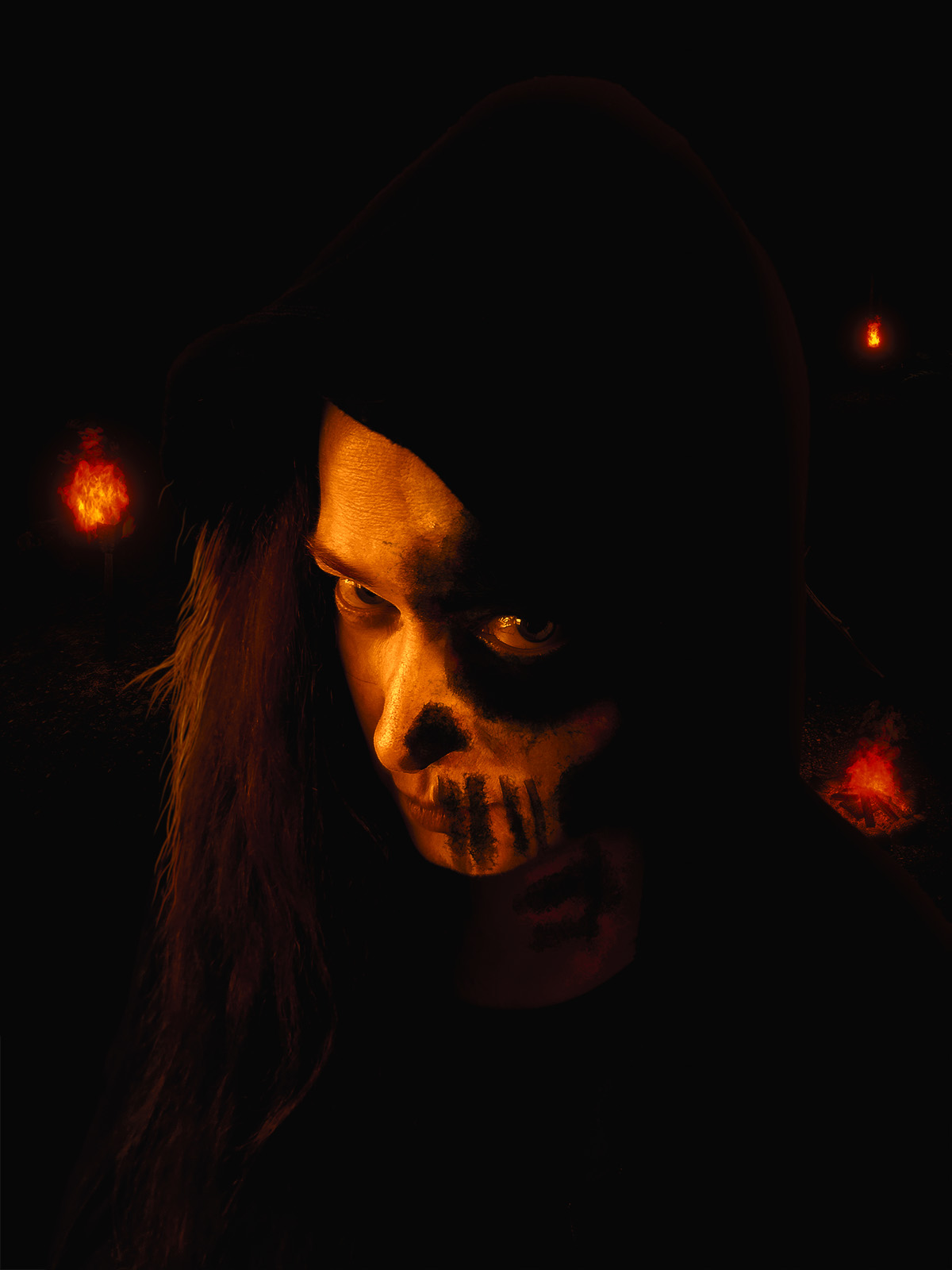 The most common face paint is the half-skull assoicated with the Ramiran rebels, the Skulls. The Skulls use it as an intimidation tactic. The Grey and Stone Streets kids see it as a way to honor people who fight Dentherion abuses. But mainly, it's spooky and cool.
The Eaves
Jilvayna Info
Grey Streets