Sotark is a prominent god among the common people and has widespread popularity among the Ancient Fey as he is associated with the arcane, with music, and the Sphinx race. Stories place him as one of two creators that carefully fashioned the Sphinxes as creatures of mystery and knowledge. Among his peers, he is known to have an interest in everything and seeks out new experiences as a source of inspiration for his true love, music. Sotark belongs to only one Pantheon, the Pantheon of Arcane. Despite having only one Pantheon identity he is considered to be influential among worshippers of almost every deity. Sotark's form is somewhat malleable, primarily appearing as a humanoid male though the species changes often despite favoring a blue-green color scheme of hair and attire. This god is often depicted as an Elf with a violin that stands amidst harsh weather but is completely at ease, with a somber or joyful look on his face.   His tenets and standards involve passion, creativity, inquisitiveness, and the ability that music has to communicate deep emotion. The personality of Sotark is well known though seldom understood, even by the Sphinxes that he cherishes. He is said to have played the first songs heard in the world of Isekai but he refutes this fact saying: "I was the first to hear the songs of the land and the first to bring them to light. I am no composer." Those that worship Sotark are varied though it is noted that commoners and travelers seem to have the greatest love for him, followed by artists and scholars. His likeness is common in opera and theater houses, or places that revere the arts while his symbol is often carved into instruments that boast quality or magical ability.

Sotark is involved in only one domain, his identity is invoked in the Arcane but he is widely known among those that do not practice magic due to his specific focus. Those that worship Sotark will venerate him as the god of all music, often of passion or romance, and in many cases the god of the arts. Sotark is often depicted by a silhouette with a darkened form that holds an instrument in a background of intense weather, ranging from arctic storms to sweltering heat or the ferocity of the ocean. He is often seen as the bridge between the "music" of the natural world and that of what mortals can comprehend which transcends and becomes magic.

Sotark is considered to be a primary deity within the Pantheon of Arcane because of his connection to magic that led to the revelation of Pink Magic, that is magic that is primarily invoked through song or art of some type. As a primary deity, he is considered quite powerful though he is not invoked as an imposing figure but rather one of inspiration and wonder. It is said that from his songs and orations came the lessons of how to cast magic through song and how to wield mundane instruments as tools of wondrous power. Tradition is often observed that states instruments bearing his symbol will play the sweetest of songs and can be heard over the fiercest of storms in the hands of a true musician. He is highly specialized when it comes to music and performance to the point that other deities do not seem to exhibit the ability or desire to create wonders through the use of song. When it comes to magic his focus is on inspiration, communication, emotion, and willpower that can touch the hearts of creatures and objects in its presence.

The exploits of Sotark are known only through the arts, with surprising historical accuracy found in songs and orations that are often tied to cataclysmic events or major conflicts either before the event or immediately after as a source of hope. The Sphinx race is said to have memorized every song, oration, play, and creation that has come from his mind due to how he shaped their intellect from the light of beginnings and endings. As a species the wisest of them have said that all things are a note within the song of Sotark, there is no beginning nor is there an end but simply a song that is difficult for mortals to perceive. It is said that a text does exist that details the music of the cosmos, instructions for a melody that connects Isekai to the Celestial Realms and beyond as part of an unknown procession but this has never been confirmed as such knowledge would only exist with the Sphinxes who have no desire to depart with such secrets.

The primary symbol of Sotark is nine notes on a measure, with no requirements for grand adornment. It is often carved into wood and is found primarily on stringed instruments or as decoration on large, stationary instruments. Other symbols include a single, silver music note that is often inlaid into an object or worn on a necklace. The note is specified as a quarter note but the name is not, this symbolizes both brevity and creativity which are both primary qualities that Sotark encourages in performance.

The holiday dedicated to Sotark is the 4th of Spring's Noon, the Prelude. It is on this day that the rains of spring are the most important to crops in warm regions, it is also a popular day for celebrations of history and romance. It is said that this is a day of courage for those that wish to remember painful memories, to step into the public view with new talents, and to take chances that have been put off for too long. Festivals of Arts are commonly held in large cities and populated areas, these continue long into the night with a variety of different focuses and few rules save for one... any settlement that celebrates this day will always begin it with a play that depicts Sotark's first moments on Isekai, how he fell deeply inspired by it, and how he played a great song that has been lost to time in a world that is long forgotten. 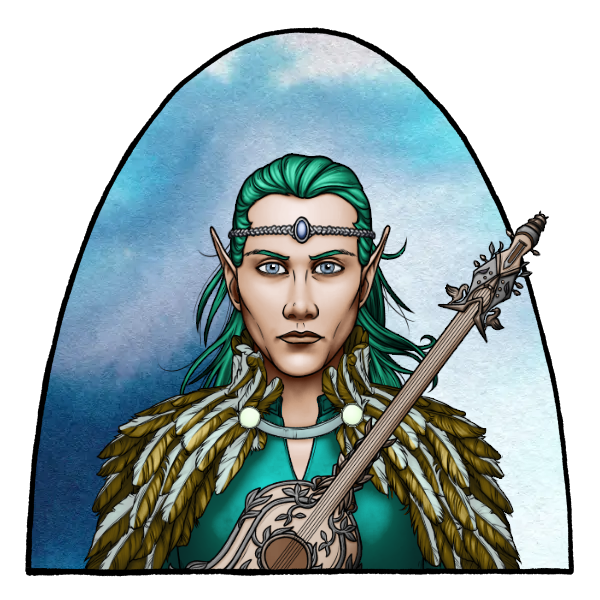 All things are connected and part of a movement, a piece that few can comprehend but we all experience and share through happiness, pain, and death. We should seek to unite and gain understanding through these things and use them to find bridges where roaring rivers separate us.   Magic is beauty, it must be felt and experienced with more than the mind in order to wield with potency.   Understanding is a skill and should be the beginning, in a world that is large and varied there are stories that will never be heard and songs that fall silent far too often so strive to seek, to remember, and to learn from what is beyond you.   All things of the world are one, from the highest mountain to the deepest cavern the world is connected and flows with one movement. Mortals too are part of this movement, a growing ensemble that pulls the attention of both light and darkness as they seek to find their place amidst the vastness.   Courage is taking the first step, all things that have merit will require diligence, luck, and risk that requires you to step out whether it be for an audience or for the lives of your friends so let there be no difference between them.