The Sveo-K’khak’khamathon was consistently the single most destructive storm recorded on Jhoutai. The force of the destruction was so appalling that it had been given a long name to stress the futility of trying to survive in it. Someone who wasn’t fluent in Sazasharanare would not understand the triple meaning of the name.
Hell-Earth-Sky
Earth becomes one with Sky
The Bondage of Earth, Fire and Wind
It was a warning created by Ka and was thus a warning to be taken seriously. The Ka were not in the habit of fearing anything.
— Journal of Nicodemus Jadey

The Sveo-Phenomenon, known locally as the Sveo-K’khak’khamathon, is a lethal storm that plagues the homelands of the Ka on a yearly cadence. The storm consists of several stages, growing in deadliness as a multitude of massive cell moves over the deserts of Khatoum. They collide in a mix of blinding water, sand and glass. Tornados spawn by the dozens in the colliding storm systems, flinging about anything unfortunate enough to in the storms reach.

The first stage of the Sveo is the meteorological build of two separate storms. One that comes from the south, carrying the warm moisture from the oceans in a severe hurricane depression. The second storm comes from the north, the windy front lifts obsidian and sand from the Khatoum badlands, forming an advancing brown and black wall of sandy knifes.

The two storms grow and lumber towards each other, forming a Fujiwhara effect and eventually merging into one massive low pressure system. The energy and cross-winds of the merging causes lightning strikes only a second apart, and tornadoes rip gashes across the desert.

The clouds didn't want to touch the sandstorm.

It was the only thing I could think as she stared up at the sky. The wind was coming straight down, a vertical and invisible hand crushing me beneath its grip. Sand billowed up from the city as if a behemoth hover copter was about to come in for a landing, but there was only the two storms, trying to merge into a singularity.

The wind was so powerful it cleaned the blood from my blades. I had to get inside.
— Log of Sheen Mevedra

Combined with the glass that comes with the northern storm, unprotected structures and people can be slashed apart in less than a minute. Rain soaks the desert in pounding sheets, turning the sand into untransversable slog and flash floods. The storm system does not move during this time, as the colliding systems force the fronts into a standstill. The super storm lasts for several hours until the energy of the system is depleted.

When the storm begins to dissolve and subside, the danger remains present. Winds remain hurricane force as the systems cannibalize each other. Flying sand and glass along with flooding can keep the surface in a standstill for days after the Phenomenon passes.
Back to Top 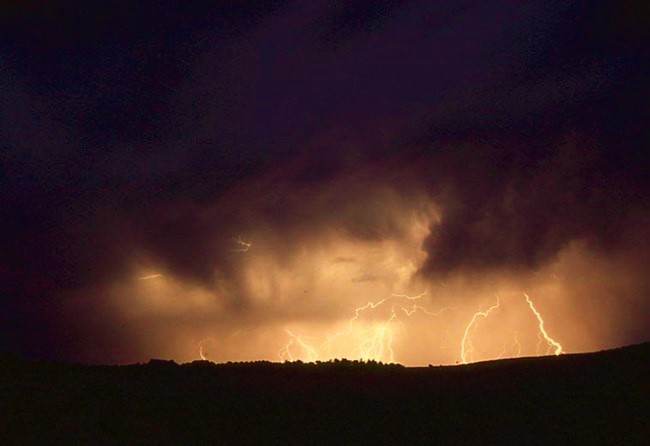 What a very harsh storm. Love the details that you provided and the sidebar with the stages to the storm! Very well done!

Thanks Shadow! I'm glad you enjoyed the article! It was very fun to draw back up from the archives and flesh out.

The whole thing is very full of detail and I like it. But what caught my eye was the "benefits". I mean, all I could think was "these people may suffer with sand inside their pants", but there os a good side. Just as anything in nature.

Thanks my friend! I always want to try and capture how this storm affects people, and knowing the benefits of a predictable storm makes it more believable. Glad you liked it.

Venerable Grandmaster PatheticBarrel
Heath O'Donnell
Content | 4 Great inclusion of a lot of information that really made this particular planet interesting, but it almost seemed tame compared to previous articles you've done. The addition of statistics is always nove though.
Technique | 5 As always, your skill at putting together a technical pleasing and fun format is hard to beat! Still jealous of those tables...
Style | 5 A common issue I've seen in these smaller articles is the tendancy to have very short paragraphs. This is fine on mobile, but I feel could feel like a let down on larger screens.

Overall | 14 Another Solid article, and another bit of interesting lore completed for Ethnis. Lets see if the future holds any surprises within Ethnis though!
Who the hell does this guy think he is?