Cloudskipper Kites are a type of Kite native to Jhoutai. They roost in high Korum spires, where they weave intricate and massive nests from excretions of bioplastic weave.

Cloudskippers can easily be spotted in the Jhoutaioan sky by their crescent shape: baleen fins below and appendage 'wings' above. When they land, they invert their position and walk on their appendages—this is because their wings are made from the bioplastic being spread among their fingers.

Seen from the ground and at a distance, the Cloudskipper Kite has a distinct crescent shape. Their trailing tentacles are used for balance when walking on land, and as rudders when navigating the tumultuous currents; these tentacles also excrete chemicals derived from the methane in their diets which, when combined, formed a durable bioplastic.

CloudSkippers use this bioplastic to weave intricate and hardy 'webs'. The footprint of their nests can cross acres, and they have often been found using them to create traps in streams or even in the air to ensnare smaller prey. Their wings, as well, are woven from this material. 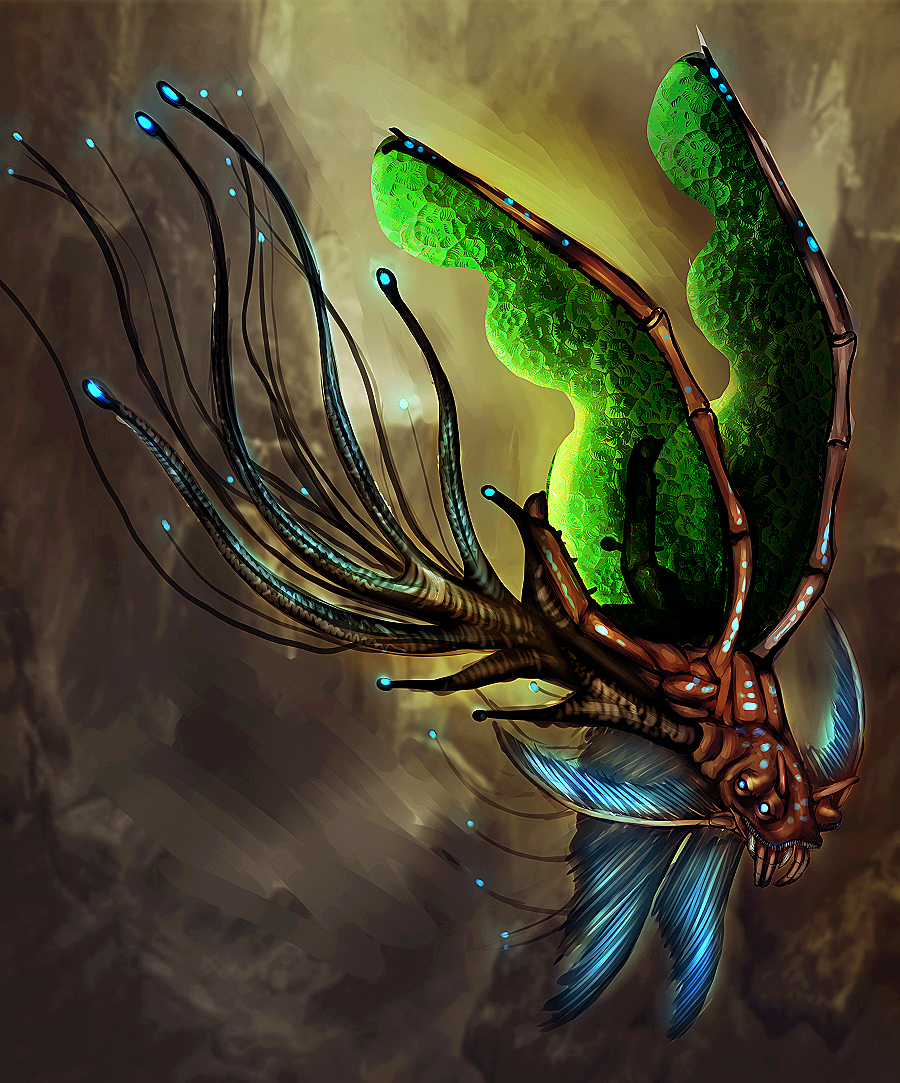 They must have some capability for learning. The Sazashi told us that a CloudSkipper raised in captivity will never create a set of wings for themself, and will remain landbound for the duration of their life.

When the Sunbursts break over the Nege Trees, the heat causes fungal pods in the fronds to burst open, and the updraft from the heat (and from the trees respirating upwards) crease a strong wind that pushes the spores into the clouds for the next stage of their growth.

The Cloudskipper relies on this process. It uses the updrafts to ride up into the clouds, and glides over them, capturing the nutrient rich spores in its baleen as well as preying on other, smaller creatures which use the same process to feed, such as young Tenchais' Groveback.

After feeding, they return to ground level and to their nests, where they cultivate and feed on Euphraesthi's Mane and other Korum-native plants and creatures.

The art is so beautiful - it really brings your description of the cloudskipper to life. I find it really fascinating that they cultivate food as well as hunt for it.

It's cool that the creatures weave their wings manually; if a wing is torn, then, they can simply repair it? this gives them a distinct advantage in aerial combat; they can risk tearing their wings; others cannot.