Silver halls and mithril doors / Stone walls to seal the cavern / Grander sights than ever before / In smithy, mine, and tavern
Toil hard in endless night / In toast, lift your flagon / Ye'll need the drink to keep you right / At the forge stoked by a dragon
Come friends, come one and all / Raise your mug by the handle / And tell 'em that their home awaits / In Thommar, City of Anvil

The subterranean city Thommar, capital of the Forge Dwarves, rests within the Crestfallen Mountains. Its cavernous halls, some large enough to contain entire surface villages are carved with unerring precision with ceilings soaring scores of feet overhead. Towering statues of famous dwarven heroes and craftsmen stand vigil over chambers and thoroughfares.   The mines below Thommar produce endless tides of iron, silver, gold, and mithril, both supplying the many skilled craftsman and providing a booming trade and wealth from cities across Erenel. But it is the Great Forge burning in the heart of the city that is the true treasure of Thommar. Just be wary of Flame Keeper Delzoun, the red dragon who lairs beneath providing the flames needed to keep the Great Forge lit.

Chieftain Farn Ironborn currently sits on The Great Throne and has for the past 90 years. The Ironborn lineage has lead Thommar since its inception.

Thommar is a city carved out of living rock, with halls and passages wide enough for the largest of beasts to walk through. There are hundreds of levels, twisting stairs, and a system of mine carts crossing in and out of the city. Numerous tunnels lead throughout the Crestfallen Mountains into Thommar leaving Chieftain Farn Ironborn and the Anvils, Thommar's Militia, with the impossible task of keeping track of dangerous dwellers.

The famous Great Forge lies in the center of Thommar in a cavernous chamber divided into smaller sections housing furnaces and anvils. Some areas of the cavern are raised on daises of stone, while others stand in shallow pits. Layers of stone catwalks crisscross the chamber, providing anchors for pulleys transporting buckets of ore and water throughout the forge.   Located under the Great Forge rests the powerful Red Dragon Flame Keeper Delzoun. Delzoun and Chieftain Ironborn are life long friends who both benefit from a life long truce. Delzoun's lair lies under the Great Forge bringing the legend of an immense treasure hoard. Chieftain Ironborn and the Anvils provide protection of Delzoun's lair who in return keeps the Great Forge lit with Dragon Fire. As Chieftain Ironborn ages, citizens of Thommar worry that if their leader dies, how would Flame Keeper Delzoun react? 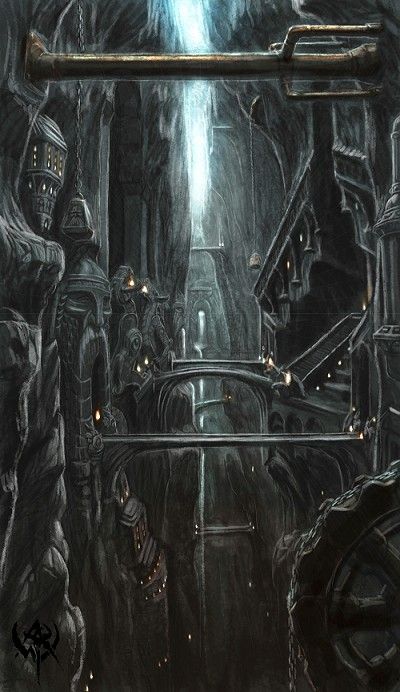