Beware, beware, the Mist Wood at night
When the sun will set and steal the daylight
Auntie will come, her gnarled stick clicks and clacks
As she crawls out her hovel, with large burlap sacks
To catch little children, she’ll hide in the glade
Away children fade, a price must be paid
Home lies behind them, a foul kitchen ahead
They should be in bed, but the Mist Wood they tread
O why son and daughter, did you not behave
Away children fade, the price has been paid
— Nursery Rhyme of Auntie Ida

Located North of the Mistwood Timberlands before one would reach the Howling Highlands, a Caelian clan following the Primal One Ødger was beginning to flourish thanks to a surplus of wild game and lumber. The followers of Ødger believed their Wyrd, a Caelian concept corresponding to fate and personal destiny, was overflowing due to their ancestor's hard work and sacrifice.   Unbeknownst to the clan, their elder, a powerful warrior named Baytur, had accidentally befriended the wretched and hateful Hag, Ida. Ida enjoyed the taste of innocence, ultimately compelling her to leave her home in the Trance: Plane of Eternal Glade and embark to the Mistwoods. Upon meeting Baytur, Ida took up the name Auntie and claimed she was related to the gods and a friend of Ødger. Auntie Ida skillfully mislead Baytur into providing her with a child to join her “flock” every time the season changed, and in return, the Caelian clan would thrive under her guidance and Ødger’s might.   Years would pass before the Caelian clan, and Baytur became suspicious, for death was not uncommon during these harsh times. After presenting another child to join the “flock,” Baytur, unable to hide his behavior any longer, followed Auntie Ida back to her cottage. It was here Baytur witnessed the horror of the child’s death as Auntie Ida tossed the body into a boiling iron cauldron.   Baytur fled in terror, alerting the clan of his foolishness and begging for help to remove the threat. Unforgiving, the Caelian clan beat Baytur and tied him to an ox. They would trade Baytur to Auntie Ida, and in return request to be left alone or face the vengeance of Ødger.   Auntie Ida, being from the Trance and bound to certain rules, slyly gave an Eternal Glade agreement. She swore to never step foot out of the Mistwood and into the Caelian Camp. Days later the followers of Ødger would come to realize, Auntie Ida would not come into their camp, but she was free to roam the Mistwood in search of a meal. Children were banned from entering into the Mistwood Timberlands alone, and the Nursery Rhyme of Auntie Ida passed down through generations as a warning to anyone entering the Mistwood. 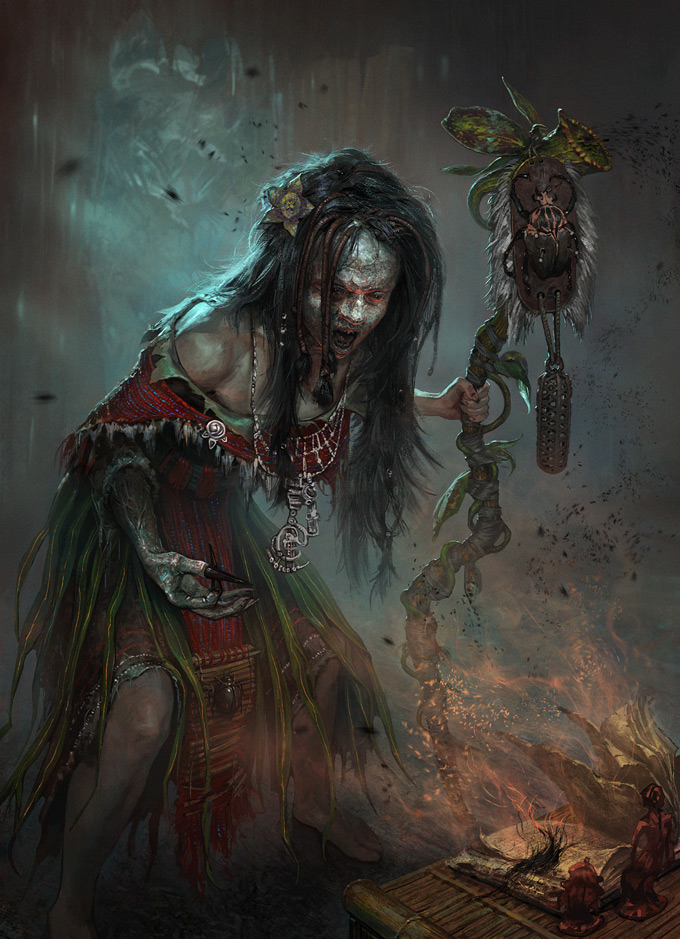 Since his death after being fooled for years by Auntie Ida into giving her children, the term Baytur means Idiot in Caelian culture.

Caelian believe their Wyrd can be inherited from one's ancestors and passed on to one's descendants for good or for ill. It is both luck and obligation. A person has some ability to better his or her personal Wyrd through right and honorable action; conversely, Wyrd can be worsened through the opposite: unlawful or dishonorable action, breaking one’s word, and showing disrespect to the ancestors. Luck flows directly from one’s Wyrd.

Answering: "Describe the tales in your world designed to make naughty children behave."
Visit Gamingbrew's Competition Page Check all other answers to this prompt Competition Homepage

This work is licensed under a Creative Commons Attribution-NonCommercial-NoDerivatives 4.0 International License.
The Erenel Fictional Universe is presented under the OGL rules for 5th edition. All artists have been duly credited.If you would like to have your art removed, please contact me immediately.
System Reference Document 5.1 Copyright 2016, Wizards of the Coast, Inc.; Authors Mike Mearls, Jeremy Crawford, Chris Perkins, Rodney Thompson, Peter Lee, James Wyatt, Robert J. Schwalb, Bruce R. Cordell, Chris Sims, and Steve Townshend, based on original material by E. Gary Gygax and Dave Arneson. A special thank you to the many talented people who create the world's greatest role playing game.
Cover image: by Andrei Pervukhin